450 Sqn presented (back) their Colours 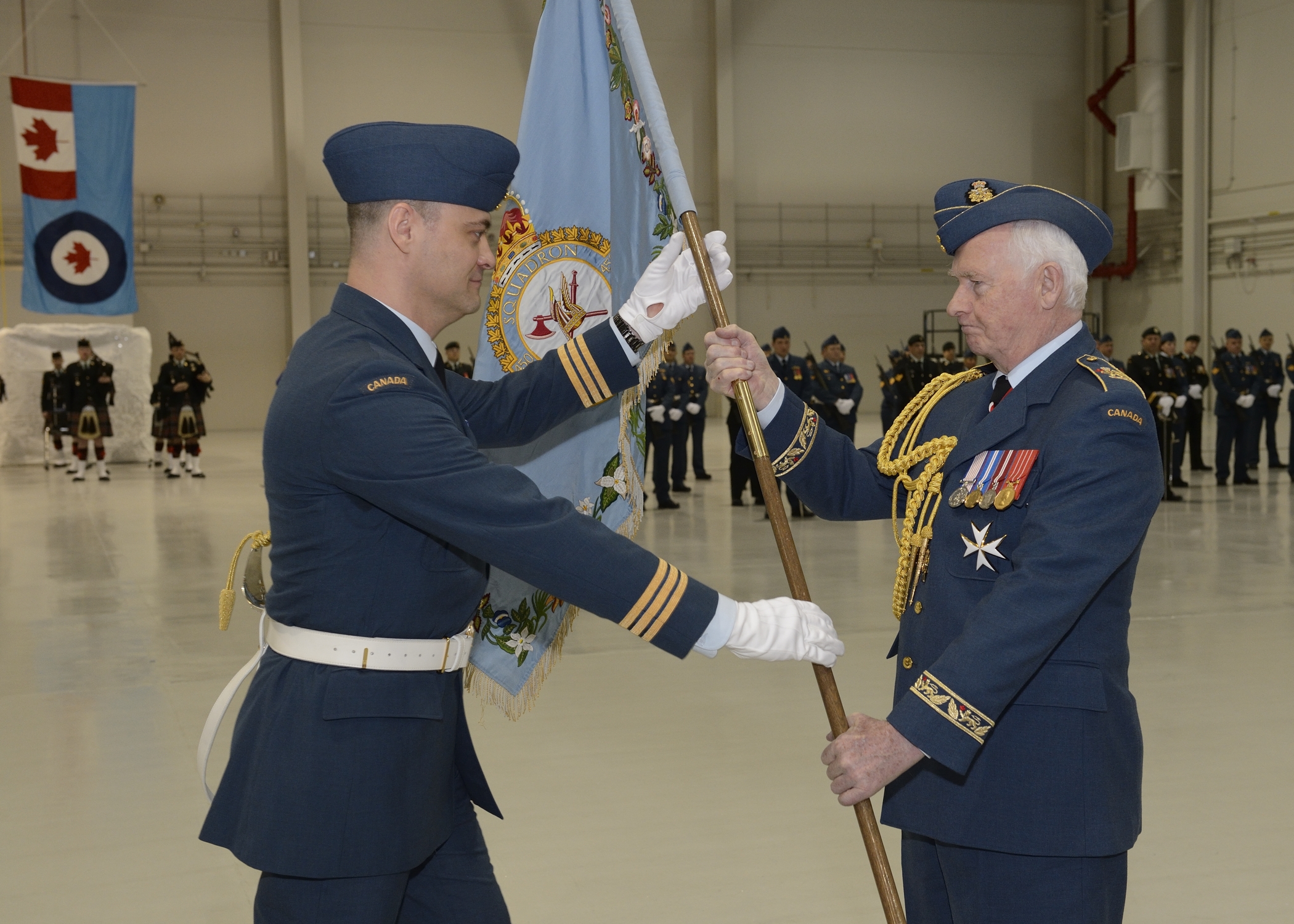 “The squadron standard represents a rallying point – physically [and also] spiritually as well as mentally” for all members of 450 Tactical Helicopter Squadron, explained Lieutenant-Colonel Duart Townsend, the squadron’s commanding officer. “Everyone looks at [the colour] as a representation of acknowledgement, worthiness and dedication.”

On March 24, 2014, Governor General and Commander-in-Chief of Canada David Johnston, on behalf of Queen Elizabeth II, Queen of Canada, returned 450 Squadron’s colour – its squadron standard – to Lieutenant-Colonel Townsend and all members of the squadron at the squadron’s new hangar at Canadian Forces Base (CFB) Petawawa, Ontario.

The word “colour” is used in military vernacular to refer to a very special flag belonging to a military unit. A colour is a large embroidered brocade flag upon which are emblazoned the unit’s badge and other unique identifying symbols. In former times, colours were carried into battle so soldiers could see and know where their unit was, and they provided a rallying point on the field of combat.

Although colours are no longer carried into battle by units of the Canadian Armed Forces, they are the embodiment of a unit’s honour, represent its members’ devotion to duty and provide a direct link to the Sovereign.

450 Tactical Helicopter Squadron, which was originally established as 450 Heavy Transport Helicopter Squadron in 1968 in St. Hubert, Quebec, was deactivated in 1996. Two years later, it was formally disbanded after nearly 30 years of service and its colour was “laid up” at 1 Canadian Air Division headquarters in Winnipeg, Manitoba. When 450 Squadron was re-established in 2012 to fly Canada’s new CH-147F Chinook helicopters, there was no doubt in anyone’s mind that reuniting the squadron and its colour would be a key element in the restoration of the squadron’s history, heritage and pride.

450 Squadron is part of 1 Wing, which is headquartered in Kingston, Ontario, and on a recent trip to Winnipeg, the wing commander, Colonel Kevin Whale, brought the colour back to Ontario. Because the colour is of such significance – like all colours, it was consecrated by military chaplains when it was first presented by then-Governor General Ray Hnatyshyn in 1994 – it was never left unguarded, and Colonel Whale made sure the precious cargo was in his possession during the entire trip.

To the music of the pipes and drums of 2 Canadian Mechanized Brigade Group, the entire squadron then paraded the colour for the first time in more than 16 years. They marched past the Governor General who, along with all military guests attending the ceremony, saluted the colour as it passed.

Following the marchpast, Colonel (retired) Lorne Rodenbush, who was the squadron’s honorary colonel when it disbanded, and Sergeant (retired) Grant E. “Ted” Mahood, former national president of the Royal Canadian Air Force Association, presented Lieutenant-Colonel Townsend and the squadron with a print of a painting, titled “Me and My Shadow”, by Canadian artist Charles Kadin. Colonel (retired) Rodenbush explained that it portrays a scene in Afghanistan:  a D-model Chinook followed by its shadow on the desert sand.

“This is a proud moment for 450 Squadron,” Lieutenant-Colonel Townsend said in a statement released earlier in the day. “It reminds us of our devotion to duty, Canada and our Queen, as we move ahead with the job of bringing the Chinook towards operational capability.”

About RCAF squadron colours
An RCAF squadron is eligible to receive its colour – which is a standard bearing the squadron badge, motto and battle honours (if they have been awarded) – after 25 years of existence. They are held in the highest esteem and are brought out on display for only important parades and occasions, under the escort of an armed ‘colour party’ consisting of an officer and at least two non-commissioned officers.

On April 10, 1958, Her Majesty Queen Elizabeth II approved the awarding of standards to operational squadrons of the RCAF, stipulating that a standard shall be "a rectangular silk flag two feet eight inches on the staff and four feet in the fly. It shall be light blue in colour and have a border composed of the floral emblems of the ten provinces of Canada in coloured silks, and in the centre shall be the Squadron badge, with white scrolls as required on which the Battle Honours of the Squadron shall be inscribed in black."

But did they go to Australia?

[/Old Canadian naming error]
You must log in or register to reply here.