Weinie said:
So I am saying that we have had some good ideas, and some bad ideas. The subs looked good, in principle, until we came to the understanding /realization that the Brits had walked away from a concept that even they hadn't worked out all the bugs worth paying attention to. -1

Then we bought used Aussie F-18's. There are numerous articles on what that means for the CAF (none of which seems to be trending positive)
-1


I would rather buy new, the C-117's and Chinooks have proved that.
Click to expand...

Lease mothballed USAF C-17s. The pers side of things will, however, continue to be the LIMFAC.

Troops from 16 Air Assault Brigade and specialist units gathered on Salisbury Plain earlier this month to go through the drills and skills necessary for very-high-readiness deployment, anywhere in the world.


An awful lot of quads, trailers, ultra-light vehicles and UGVs being show-cased these days.
Click to expand...

The new stable for the Marines and Paras? 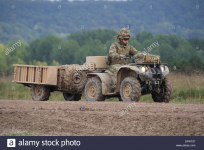 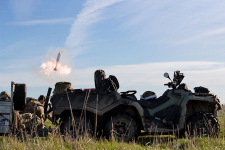 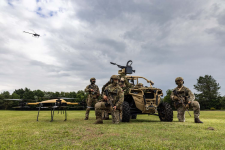 Kirkhill said:
The new stable for the Marines and Paras?

Clearly, the suite of 'mobility enhancers' has been designed for warmer climes than Sennybridge Training Area.

I recall the 'cut down' land rovers of the anti-tank platoons in the olden days (before my time). It looks really cool roaring along without a roof, but is actually frigid apparently 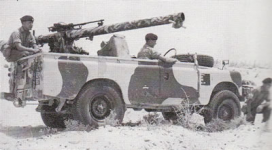 daftandbarmy said:
Clearly, the suite of 'mobility enhancers' has been designed for warmer climes than Sennybridge Training Area.

I recall the 'cut down' land rovers of the anti-tank platoons in the olden days (before my time). It looks really cool roaring along without a roof, but is actually frigid apparently

Roll those shirtsleeves down and dress for the weather! 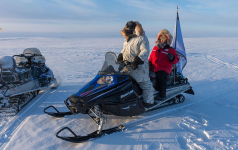 WE ARE HIRING NOW.

What You Get –
Daily wage, initial joining bonus (£300), training completion bonus (£2000) and yearly tax-free bonus (starts at £459, up to £1759)
Flexible hours (scale up or down to suit your life)
International travel (places we have been recently – United States, Croatia, France, Italy, Ukraine, Kenya, Afghanistan, The Falklands, Belize and more)
Career courses (promote through ranks or subject related, e.g. parachuting, guns, medical, driving, signals training)
Adventure Training (skydiving, diving, mountain biking, skiing, mountaineering, climbing and more)
If this sounds good to you, apply right now. Don’t wait.
Also open to those serving in other Units, who wish to transfer, are looking for a new challenge.
Also, the single best step you can take RIGHT NOW to become a Reservist Paratrooper is to attend one of the 2020 Recruitment Events.
Glasgow, 15th of September, limited to 30 spaces, book your ticket today – http://bit.ly/parareserveglasgowtickets

‘I sat on the fence for a while… Then I went to The Glasgow Recruitment event last year (2019).
It gave me the confidence to apply. I met others like me, and current serving Paratroopers. I learned what it takes to get in - the entry requirements, the application, fitness and more about the Paratrooper mindset.
It was an invaluable experience, I have now finished the recruitment cadre, passed the Combat Infantry Course and I’m waiting to do P’ Company.
I can’t wait to become a Paratrooper in The Parachute Regiment Reserve, a lifelong goal – Achieved.

*Social distancing rules apply. All visitors must wear a facemask


Also, I see they've recently returned form a combined exercise in the US. Again, somewhat different from the Canadian Reservists' experiences:

"4 PARA have now returned from a 2 week battle camp in the USA. The Battalion undertook some valuable training alongside our American counterparts securing the ability to work together in complex situations." 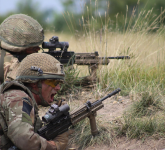 Ajax and his Achilles heel.....

A defence minister has cast fresh doubt on a “troubled” £5.5 billion light tank programme beset by noise and vibration problems that caused injuries to personnel.

Jeremy Quin told MPs he hopes a long-term solution can be found for the Ajax vehicle programme, which he described as “incredibly important” for both the British Army and thousands of workers – including at contractor General Dynamics (GD).

But he acknowledged he “cannot 100% promise” a resolution will be found and insisted the Government will “never accept” a vehicle that does not meet its testing requirements.

Responding to an urgent question, Mr Quin told the Commons: “We’re committed to working with General Dynamics to achieve a resolution of these issues.

“I’ve said before I cannot 100% promise to this House that we will find a resolution to these issues, but we are determined to work through with GD.”

Mr Quin confirmed vehicle trials have resumed and it is hoped they can work out where the vibrations are originating from in the vehicle and whether design modifications will work.

The trials had been paused because of safety concerns that left some personnel complaining of vibration injuries while others have suffered hearing loss – in some cases requiring steroid treatment in an attempt to reverse the damage.

MPs heard 310 personnel have been identified as requiring urgent hearing assessments, with efforts ongoing to trace six yet to be contacted.
Mr Quin also said: “I would beg MPs to be mindful of those people who will be concerned about their jobs and livelihoods, particularly if we can – as I sincerely hope and trust – find a long-term resolution to these issues, which we are determined, working with General Dynamics, to do.”

He earlier noted: “I have previously described Ajax as a troubled programme. It is. But that does not mean that the problems are irresolvable.”
Mr Quin added: “While we will never accept a vehicle that does not meet our testing requirements, we remain committed to working with General Dynamics to understand and, we trust, resolve the outstanding issues.”

He added: “We need a vehicle that works and which is fit for purpose and that is what we’re determined to deliver.”

Shadow defence secretary John Healey said: “This is a programme that has cost £3.5 billion to date, delivered just 14 vehicles and is set to be completed a decade late. The minister’s statement now puts Ajax on an end-of-life watch.”

He added: “Ajax is the biggest procurement failure since the Nimrod and this has happened entirely on this Government’s watch. Ministers are failing British forces and they’re failing the British taxpayers.”

The Labour MP asked the Government to “halt” cuts to Army numbers, at least until they have “sorted out and fixed” the light tank programme, given it is linked to “more advanced technology based on the Ajax”.

He went on: “Ajax is red, unlikely ever to be achieved. How many were green? Successfully on track of the 36? None, zero, zilch, nothing.
“Not one major MoD procurement programme is successfully on track. This is over £100 billion of British taxpayers’ money. The procurement system of Abbey Wood is a shambles and presiding over this steaming heap of institutional incompetence is the minister.”

When asked by Conservative former defence minister Tobias Ellwood for a deadline, Mr Quin said: “It will be all too easy to set an artificial deadline when I can tell this House that we know all the answers. I can’t do that.

The minister was then interrupted by Mr Ellwood shouting: “Set a deadline.”

Defence minister Jeremy Quin told MPs that he “cannot 100% promise” the programme’s problems can be resolved.

While the concept of Ministerial responsibility puts the blame at the top, what we're really looking at, which is the same as here in Canada, is a failure of the bureaucracy and the industry. While there is a good bit of political manipulation of the conditions for procurement, I'm not aware of any such in the case of Ajax.

REME: We'll keep you guessing in one way or another 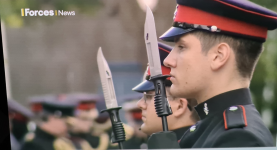 Not completely sure about this, sounds like the SLR is coming back as a DMR rifle

‘Struggle’ with the recoil? Who actually thinks that is/should be a consideration?

Good2Golf said:
‘Struggle’ with the recoil? Who actually thinks that is/should be a consideration?
Click to expand...

You can't charge a rifle with assault.... yet

daftandbarmy said:
You can't charge a rifle with assault.... yet
Click to expand...

I see what you did there, D&B…

Colin Parkinson said:
Not completely sure about this, sounds like the SLR is coming back as a DMR rifle

Wasn't that the entire point to them getting the LMT L129A1?
Last I heard the Uk MoD has bought a slew more guns from LMT.

On my way to meetings today I happened to march past here and took a few photos: 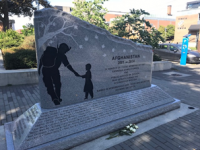 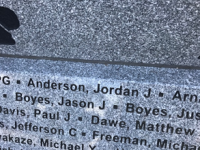 Good2Golf said:
‘Struggle’ with the recoil? Who actually thinks that is/should be a consideration?
Click to expand...

Only if you reverse the gas plug.

RIP Andy, Matt and others.

Maybe they could just dragoon a couple of Ruperts and Nigels from the Guards? 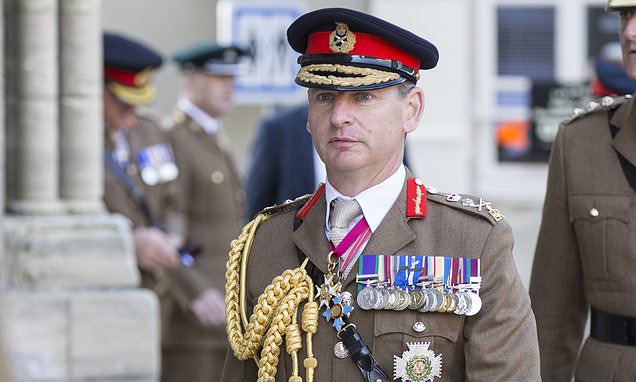 The UK regiment has been led by former public schoolboys whose privileged education is said to instil the leadership skills and poise required. Pictured: General Mark Carleton-Smith.

FJAG said:
Maybe they could just dragoon a couple of Ruperts and Nigels from the Guards?

SAS Selection used to be known as 'Trial by Sergeant's Mess'. SBS Selection was worse.
G

daftandbarmy said:
SAS Selection used to be known as 'Trial by Sergeant's Mess'. SBS Selection was worse.
Click to expand...

I’ve now got a mental image of a couple of killick stokers lording over who gets badged.

Grimey said:
I’ve now got a mental image of a couple of killick stokers lording over who gets badged.
Click to expand...

That was an issue, apparently. I know a couple of really good guys who got binned, likely for being 'toffs'.

I know a couple of other guys who tried to sort that out.

All that to say if they're not getting the right people into the 'net', they need to look at their net minders.
You must log in or register to reply here.