Jockeying for a two-year seat on the United Nations Security Council starts early — way early. Three countries are already vying for the two open seats in the regional group known as Weog — Western Europe and Others — for the 2021-22 term. The election is June 2020, and the “others” are Australia, Canada, Israel and New Zealand.

The 2020 contenders — Canada, Ireland and Norway — are competing to represent the oddly configured regional group in an election that will be decided by the 193 members of the General Assembly. Two will serve in 2021 and 2022 alongside the Council’s five permanent members and eight other nonpermanent members. The Weog bloc is often one of the most contested elections.

For the 2020-21 term, the one seat open in the Eastern European bloc is being fought by Estonia and Romania, who face election this June. India and Vietnam are competing for the single Asia-Pacific seat. The remaining groups — Africa and Latin America-Caribbean — usually avoid public campaigns by preselecting countries through rotations.

For the race among Canada, Ireland and Norway, each offers a different approach to one of the most pressing issues facing the UN: the quest for gender equality, internally and around the world.

Only two women currently sit on the Security Council, Britain’s ambassador, Karen Pierce, and Poland’s ambassador, Joanna Wronecka. The Weog bloc is fielding two female ambassadors — Mona Juul of Norway and Geraldine Byrne Nason of Ireland — for what could be the first time in UN history.

Gender equality is a sensitive issue at the UN. Secretary-General António Guterres has achieved gender parity at the senior management level but much remains to be done at all other levels.

Adding more women to the Council would meanwhile give weight to the global push for gender equality. Nason of Ireland chaired this year’s Commission on the Status of Women, the UN’s global conference on women’s rights. Between 2011 and 2014, she was the highest-ranking woman in Ireland, as second secretary-general of the Department of the Taoiseach (Ireland’s prime ministry).

While Canada is the only contender with a male ambassador, Marc-André Blanchard, it is also the only one of the three countries pushing a publicly avowed feminist foreign policy, led by its female deputy ambassador to the UN, Louise Blais.

“We are very supportive of the secretary-general’s work on gender equality,” Blais told PassBlue. “He has achieved gender parity in high echelons of the UN, but we think it needs to go deeper than that. There are other layers that need to become more representative of women.”

The CBC has aired the possibility of Canada and Ireland splitting one of the Council seats, each assuming it for a year, which Italy and the Netherlands did in the 2017-18 term, after neither could win a majority vote in the General Assembly.

The option was brushed off by Blais, who said, “We are not considering or even contemplating it at this point.”
Click to expand...

Pretty embarrassing for the current government if Canada doesn't win the seat.

Considering they did everything they could while in opposition to shoot down our last attempt, I'd say more like karma.

I'm sure the PM's alleged "fake feminism" will come up more than once.

I suspect that while the arrogance of the "national governing party" usually precludes them from understanding the term "embarrassment" (as with any polity that presumes its way is the only way, and fails to comprehend centrist compromise), they are slowly  catching on.

So far though, they seem to believe that throwing the occasional public servant under the bus -- they'll soon run out of senior ones, and have to start digging deeper -- is as close to mea culpa as they get.  It's much easier to apologize for occurrences many generations ago, "before we brought sunny ways;  you're welcome."

Haggis said:
I'm sure the PM's alleged "fake feminism" will come up more than once.
Click to expand... 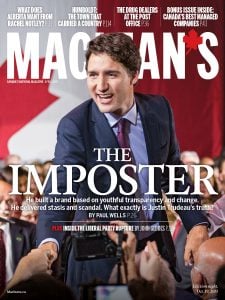 Whatever could you mean?


I'm increasingly returning to my pre-election belief:  Harper needed to go and Trudeau's 'just not ready,' therefore leave Parliament in recess and we'll have a look every 6 months to see if there's a need to bring them back.

Yes, it's unworkable; I understand the recurring requirement for various Parliamentary approvals.  But one can dream.

Three countries are already vying for the two open seats in the regional group known as Weog — Western Europe and Others — for the 2021-22 term. The election is June 2020.....
Click to expand...

Think of it this way: The Liberals lose the Oct 19 election. If Canada doesn't get the seat in June 20 it will be the Conservatives/Scheer's fault. If Canada gets the seat, it was all the hard ground work that Trudeau did. The MSM will be on who's side do you think?
L

Journeyman said:
leave Parliament in recess and we'll have a look every 6 months to see if there's a need to bring them back.
Click to expand...

"No man's life, liberty or property are safe while the legislature is in session."
- Gideon Tucker

Journeyman said:
... leave Parliament in recess and we'll have a look every 6 months to see if there's a need to bring them back.

Yes, it's unworkable; I understand the recurring requirement for various Parliamentary approvals.  But one can dream.
Click to expand...

Still, it seems Northern Ireland isn't falling off the edge of the earth after being without a legislative body since January 2017  ;D

Public complaints by UN peacekeeping dept. about our efforts with the C-130J and MINUSMA will not exactly help our UNSC candidacy, and will put of EU members helping in Mali, both with UN and with France's Barkhane CT op:
https://www.theglobeandmail.com/canada/article-canada-un-disagree-over-restrictions-on-pledged-military-transport/

Norway is a nice choice, I can't see them being as pushy about identity and gender politics as the Canadian lot might be.

And see this about our leaving as scheduled from MINUSUMA and the UNSC seat:

Kiss that seat goodbye, Justin (not that it was a good idea to seek it in the first place anyway but now you're just a bad as Harper--gosh).

My money is on Australia.
You must log in or register to reply here.