I remember somebody saying something to the effect that the war after the next would be fought with rocks and clubs.

It appears that the Indians and Chinese have decided to skip the bit in between.  How does drone warfare fit into this?

At least 20 Indian soldiers were killed in a clash with Chinese forces in Ladakh in the disputed Kashmir region, Indian officials say.

The incident follows rising tensions, and is the first deadly clash in the border area in at least 45 years.

The Indian army initially said three of its soldiers had been killed, adding that both sides suffered casualties.

But later on Tuesday, officials said a number of critically injured soldiers had died of their wounds.

India's external affairs ministry accused China of breaking an agreement struck the previous week to respect the Line of Actual Control (LAC) in the Galwan Valley.

BBC diplomatic correspondent James Robbins says violence between two armies high up in the Himalayas is very serious, and pressure will grow on the two nuclear powers not to allow a slide into full-scale conflict.

Soutik Biswas: An 'extraordinary escalation' with rocks and clubs

What have both sides said about the incident?
Early on Tuesday the Indian army said three of its soldiers, including an officer, had died in a clash in the area.

Later in the day, it released a statement saying the two sides had disengaged.

It added that "17 Indian troops who were critically injured in the line of duty" and died from their injuries, taking the "total that were killed in action to 20".

China did not confirm any casualties, but accused India in turn of crossing the border onto the Chinese side.

Both sides insist no bullet has been fired in four decades, and the Indian army said on Tuesday that "no shots were fired" in this latest skirmish.

How a clash that did not involve an exchange of fire could prove so lethal is unclear. There are reports that it was fought with rocks and clubs

Local media outlets reported that the Indian soldiers had been "beaten to death".

How tense is the area?
The LAC is poorly demarcated. The presence of rivers, lakes and snowcaps means the line can shift. The soldiers either side - representing two of the world's largest armies - come face to face at many points.

India-China border row explained in 400 words
Why tensions are rising between the neighbours
How a new map stirred old rivalries
But there have been tense confrontations along the border in recent weeks.

India has accused China of sending thousands of troops into Ladakh's Galwan valley and says China occupies 38,000sq km (14,700sq miles) of its territory. Several rounds of talks in the last three decades have failed to resolve the boundary disputes.

The two countries have fought only one war so far, in 1962, when India suffered a humiliating defeat.

In May, dozens of Indian and Chinese soldiers exchanged physical blows on the border in the north-eastern state of Sikkim. And in 2017, the two countries clashed in the region after China tried to extend a border road through a disputed plateau.

Tensions have risen over a road built by India in Ladakh
There are several reasons why tensions are rising now - but competing strategic goals lie at the root, and both sides blame each other.

India has built a new road in what experts say is the most remote and vulnerable area along the LAC in Ladakh. And India's decision to ramp up infrastructure seems to have infuriated Beijing.

The road could boost Delhi's capability to move men and materiel rapidly in case of a conflict.

Kashmir: Why India and Pakistan fight over it
Over the past week, Indian media have been reporting that troops from both sides had been gradually moving back from their stand-off positions, and that efforts were under way to de-escalate the tensions. So it will come as a surprise to many to hear of a violent clash in which three Indian soldiers were killed.

The last time the two sides exchanged any gunfire along the border was 1975, when four Indian soldiers were killed in a remote pass in north-eastern state of Arunachal Pradesh.

The details of the latest skirmish, and the emergency measures being taken to defuse it, are still unclear.

Whatever the result, the latest incident is likely to trigger a fresh wave of anti-China sentiments in India.

It will also present daunting foreign policy and security challenges to Indian Prime Minister Narendra Modi and his government, which is struggling to contain a surge of Covid-19 infections and revive an economy which looks headed for recession.
Click to expand...

20 Indians dead including a Lt Colonel - no bullets fired.

2 to 1 ratio ain't  great but loosing a LCol is a blow, i am surprised shots were not fired
C

All of this over an area where hardly anybody lives, and nobody that lives there really cares.


Can't the adults just sit down, agree on where the border should be, and move on?  Instead, soldiers are dying over literally nothing because the respective leadership can't just buck up & deal with it for good...  :facepalm:

Why Are India and China Fighting?
Nuclear powers New Delhi and Beijing engage in a skirmish marking the first combat deaths along their border in more than four decades...
https://foreignpolicy.com/2020/06/16/why-are-india-china-fighting-ladakh-skirmish/
Click to expand...

Twenty Indian mountain troops were killed and others wounded. This would be snow covered mountains. Pretty unforgiving in Indian controled Kashmir.

There's a interesting meme in there somewhere. Two nuclear armed powerS fighting each other with sticks and stones.

More...I sure this will blow over.  China sent their message. What I mean by that it looks like China is pushing hard everywhere to see how far they get.

Further to this post, the rumble at 14,000 feet (see here) has just got much worse–a piece at the New Statesman by Prof. Rajesh Rajagopalan (tweets here):

Why China and India are locked in a dangerous stand-off
...
Click to expand...

The Chicoms sure do have a way of alienating an awful lot of people these days, what with their “Wolf Warrior” diplomacy amongst many other things.

Meanwhile the Aussies are getting on increasingly well with India while PM Trudeau has managed to ensure that Canada’s relations with the country remain distinctly chilly:

As for the Himalayan imbroglio one imagines our government will try to stay as quiet and anodyne as possible in order to avoid making strained relations with the PRC even worse (more here) while not further offending the Indians.
https://mark3ds.wordpress.com/2020/06/17/china-vs-india-or-the-himalayan-military-cockpit-ladakh-section-part-2/
Click to expand...

Spencer100 said:
There's a interesting meme in there somewhere. Two nuclear armed powerS fighting each other with sticks and stones.
Click to expand...

Can we not send Justin to peacekeep?

Spencer100 said:
There's a interesting meme in there somewhere. Two nuclear armed powerS fighting each other with sticks and stones.
Click to expand...

When you think about it, despite the atavistic overtones and clearly tragic outcomes, this was an excellent example of restraint in the use of force spectrum, which has likely prevented an even bigger military confrontation. Imagine what might have happened had the two sides kicked off with machine gun fire, mortars and the rest?

I'd love to see their rules of engagement...

Three separate brawls divided by time and space. Chinese troops who aren't normally deployed at Patrol Point 14. And, a young Indian Army team that took a decision to cross the Line of Actual Control (LAC) to square things up with the Chinese Army. The contours of the June 15 bloodletting have become cleared.

Plenty has been written so far about the clash between Indian and Chinese troops in Ladakh's Galwan Valley. But contradictory claims, and gaps in the narrative have so far left the story bereft of cohesiveness. Several questions have remained unanswered, with individual aspects lending themselves to speculation and guesswork. Now with a series of conversations with Army personnel in the Galwan Valley, Thangtse and Leh, India Today TV pieces together the most detailed account so far of how things played out.  -more at link-

India is now saying it's intelligence service believe the most recent deadly encounter that occurred resulting in 20 deaths was ordered by Beijing to happen. Now if they can show to evidence and prove it, that would be an act of war by China.

A bit of a thread necromancy but better then a new thread. Below is a recent interview with a former Indian Major, now a member of a policy think tank talking about the Chinese- India dynamics

Why the Quad Alarms China

the worst-case scenario from Beijing’s perspective is that the Quad could serve as the foundation of a broader global anti-Chinese coalition. If the Quad were to draw other Asian countries, the EU, and NATO into efforts to confront or undermine China’s international ambitions, it could over time swing the collective balance of power definitively against China. The Quad could also lay the groundwork for a broader allied economic, customs, and standards union, which could reshape everything from global infrastructure funding to supply chains to technology standards.
Click to expand... 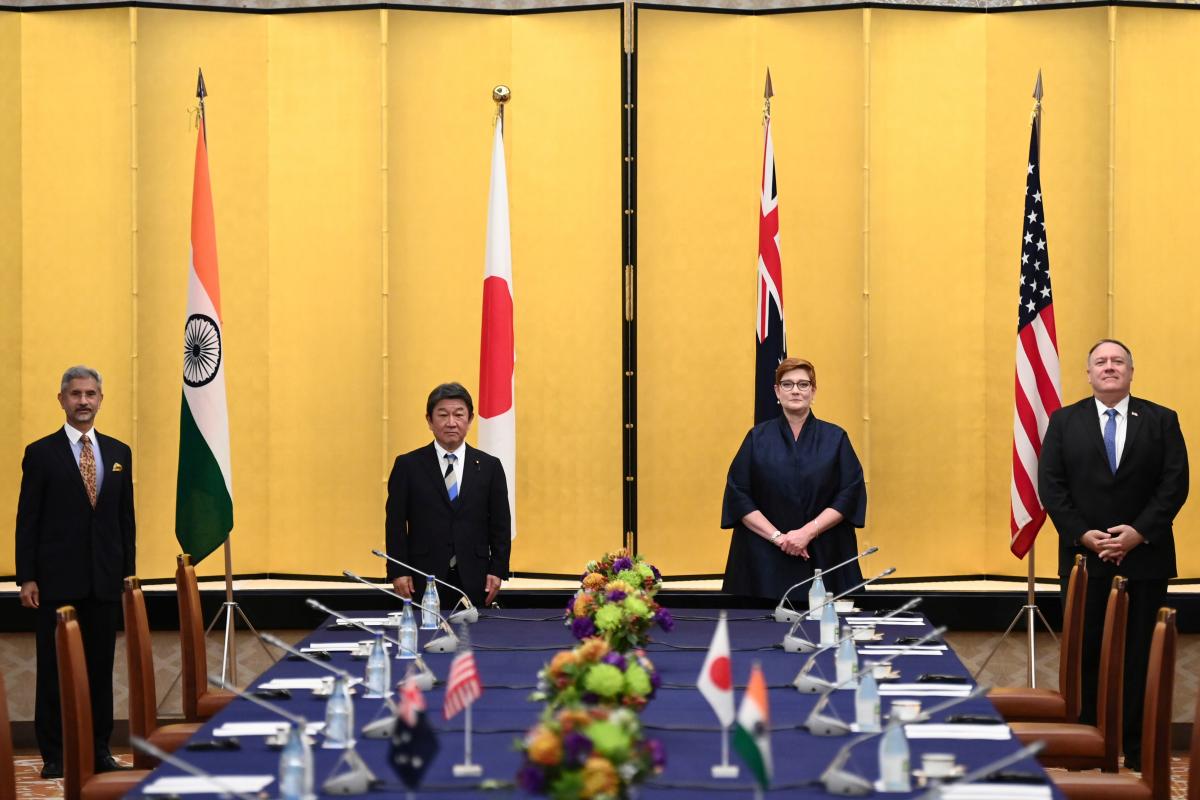 Why the Quad Alarms China

The Quad's success poses a major threat to Beijing’s ambitions.

Japan has generally had a soft-spot for the UK seeing a mirror image of itself on the other side of Eurasia. Islands off the continent. WW2 was a bit of an aberration in that sense.

India and America - have a love-hate relationship with the UK sharing some British customs, the English language, Common Law and variants of democratic practices.

The biggest fly in the ointment for the Chinese is The Commonwealth.

While the UK was suborned by the EU and ignored, or separated from, the Commonwealth, those countries became the happy hunting grounds for the Chinese - supplying cheap resources. They were easily bought, corrupted or intimidated.

If the Commonwealth is revived as a Quad entity, together with the Five Eyes, Five Powers, ASEAN, and the CPTPP then China will find itself severely circumscribed.

Coincidentally so will the rest of Eurasia (Russia and the EU).

And George Orwell will be right again - Oceania vs Eurasia.

PS - Ultimately, the biggest question may be what all of this means for Xi,
Click to expand...

PPS - When we write The United Kingdom it is often forgotten that that includes not just Scotland, England and Wales on Great Britain and Ulster on Ireland, but also the Isle of Man and the Channel Islands (with their own independent parliaments and tax regimes) and the 14 British Overseas Territories:


The UK Overseas Territories are:​

Many of them strategic outposts and some well known for their independent tax policies.

They too are members of the Commonwealth. If they were to be able to vote in the UN with the rest of the Commonwealth, as a block, then that would really put a spanner in the works.
Last edited: 7 Aug 2021
You must log in or register to reply here.

The Enemy of My Enemy is My Friend .... and then what?