Reproduced under the Fair Dealings provisions of the Copyright Act. 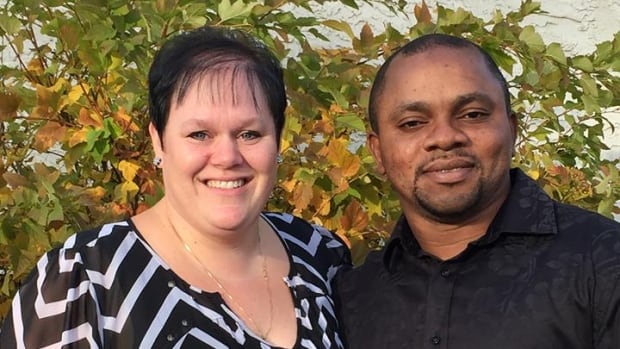 Michelle Omoruyi has been charged with human smuggling. Her husband Victor Omoruyi is in custody in the U.S. in connection with the same investigation. He has not been charged. (Facebook)


As Victor Omoruyi was driving just south of the Canada-U.S. border in North Dakota last Friday evening, his wife was driving not far away on the Canadian side — in southeastern Saskatchewan near the North Portal border crossing.

The Regina pair were stopped by authorities at the two locations and taken into custody that night as part of an investigation into the smuggling of foreign nationals. 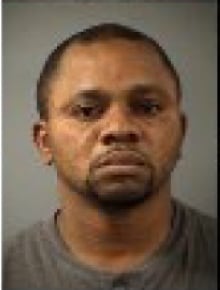 Officials had been investigating him since before Christmas for frequent border crossings.

U.S. border agents flagged Canadian officials that a smuggling attempt may be in the works.

Later that evening, around 9 p.m., Michelle Omoruyi, 43, was pulled over by officers and arrested with nine people from West Africa in her vehicle. Sources tell CBC that the nine people included five adults and four children.

South of her, in North Dakota, U.S. officials were taking her husband and two other people into custody for immigration violations.

U.S. Customs and Border Protection said no charges have been laid against those three people yet.

The arrests were made after a four-month joint investigation in the Saskatchewan region.

In December, Canadian border agents flagged a man who had been frequently using the North Portal entry for more investigation and brought in RCMP investigators.

On Friday, U.S. border agents noted that the same man had crossed the border into North Dakota, and alerted the Canadians. That night, RCMP were flagged that a smuggling attempt may be in the works.

RCMP pulled over Michelle Omoruyi as she was driving in an isolated area north of the border. The nine asylum seekers were in the vehicle, according to police.

The five adults and four children weren't harmed and were all taken into custody by the Canada Border Services Agency. They have since been released. Information on their ages and nationality is not being released.

This isn't the first time Canadians have been charged with human smuggling.

Also in December, five people from Ontario and Quebec were charged after police said they brought people into the country illegally. The charges include conspiracy and aiding or abetting the illegal entry of one or more persons into Canada.

The foreign nationals were allegedly brought into the Cornwall, Ont., area from New York state.

One of the refugees told CBC reporters he paid $5,000 US to be smuggled into Canada. He was arrested shortly after getting off a boat in Ontario.

With files from Karen Pauls, Stefani Langenegger
Click to expand...

Other links found in article:

Reproduced under the Fair Dealings provisions of the Copyright Act.

Michelle Omoruyi has been charged with human smuggling. Her husband Victor Omoruyi is in custody in the U.S. in connection with the same investigation. He has not been charged. (Facebook)

U.S. border patrol officers claim to have documented multiple instances where they believe Nigerian nationals were smuggled into Canada from North Dakota.

The apparent asylum seekers paid $2,000 US each and filed refugee claims after reaching Canada, according to affidavits obtained by CBC News.

CBC News has learned her husband, Victor Omoruyi, is one of the three other people arrested by American authorities.

They are being detained in the Grand Forks Correctional Centre.

According to court documents, Omoruyi had entered into the U.S. at the Portal port of entry on April 14 at 1:30 p.m. He told border officers he was going to visit friends and shop in Minot, N.D., and that he planned to return to Canada the next day.

An officer in an unmarked vehicle followed Omoruyi's white 2012 Ford Explorer to Minot, where another agent joined the surveillance.

Omoruyi drove to a hotel and returned to his vehicle with another man.

"As they drove around several store fronts, it appeared as if they were looking for something or someone," the affidavit reads.
After Omoruyi returned to the hotel, officers observed five adults and four children joining him in the vehicle.

At 7:30 p.m., they left Minot and drove toward the Northgate port of entry, where the Burke County Sheriff's office and RCMP Integrated Border Enforcement Team (IBET) took over the surveillance.

Photo images captured Omoruyi's vehicle about half a kilometre from the U.S./Canada border at about 9:30 p.m.

The area primarily consists of open farm fields with no occupied dwellings nearby.

"Omoruyi was clearly seen stopping his vehicle, exiting from the driver's seat, and opening the rear doors," the affidavit says.

"All other occupants then exited the vehicle. Omoruyi appeared to help the children exit the vehicle. Once all of the passengers were out of the vehicle, Omoruyi got back in the driver's seat and departed the same way he arrived."

Officers say the nine passengers walked north to Canada through the open field, to a vehicle waiting to pick them up.

They were intercepted by police.

Meanwhile, officers watched as Omoruyi met up with a white sedan. Shortly after, police stopped Omoruyi's vehicle, which at that point had three people in it.

Omoruyi provided a Saskatchewan driver's licence and said he was headed to Regina. He told officers the passengers were his friends and he had known them for five or six months.

Police say the front seat passenger was Okundia, who showed them a photo card from Ontario but then said he was from Africa and that he'd been dropped off in a field.

When questioned, "Okundia began acting extremely nervous and began to stutter his words. He was also visibly shaking," the affidavit reads.

Records checks at the border show no legal entry into the U.S. for Okundia.

The back-seat passenger, later identified as Johnson, had an Ontario driver's licence. She initially told officers she was from Canada and had been in the U.S. for one year.

However, her story broke down under questioning. Record checks found her last legal attempt to enter the U.S. was denied.

One of the officers noticed the passengers' shoes had fresh mud on them. Neither had immigration documents that would allow them to be in the U.S. legally.

The officers concluded a smuggling event had occurred and detained the three people.

In interviews later, Johnson admitted she started her evening in Regina and was given a ride to the border by a white female with short hair. She said she and Okundia were picked up by Victor Omoruyi.

During his interview, Omoruyi denied driving anyone from Minot. He asked to speak to his wife, which is when law enforcement learned she was the woman in Canada arrested for smuggling in the nine Nigerians.

Okundia, a Nigerian citizen, refused to answer questions without a lawyer present.

None of these allegations have been proven in court. 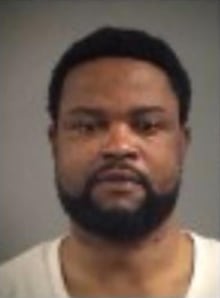 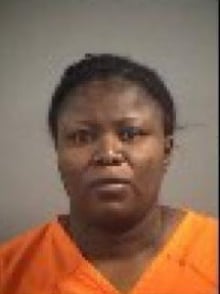 Other links found in article:

I suspect a marriage of convenience to affect the nefarious move of Nigerian Scammers to a new location....closer to their victims.  [