FJAG said:
Not commenting on the quality of GM v RAM or Ford trucks but I like the general configuration although some hard mounts for MGs would be welcome.

I do wonder about the number at 649. Assuming 4 per platoon / 16 per company that would require roughly 50+ per battalion (not counting the HMMWVs currently in the weapons company). The US Army currently has 14 Active IBCTs and 20 NG IBCTs for a total of 102 light battalions. 649 would at best equip some 13 battalions (or most probably less than that). Makes you wonder if the NG IBCTs are getting these shiny new trucks?

... The approved Army Acquisition Objective is 2,065 vehicles.
Click to expand...

That's much better but still leaves about one half (or more) of the US Army's light battalions unequipped. One wonders what the scale of issue will be as between Active and NG IBCTs and airborne v airmobile v straight leg IBCTs (not to mention the 75th Ranger Regt).

(Edit to add - to partly answer my own question it seems that the 1st IBCT of the 82 AB Div is scheduled to be the first to receive the new vehicles - https://soldiersystems.net/2020/06/30/gm-selected-to-provide-infantry-squad-vehicles-for-us-army/ - so airborne definitely)

ArmyRick said:
9 troops? nah....
Also, can it be mounted with a 7.62mm mini gun for mowing down coyotes and trees? asking for a friend
Click to expand...

I like your way of thinking. Billy B did have an influence on you didn't he?

Billy B did indeed change me, Jim.

Watch me with my cattle when we are doing a paddock move and one falls back "Come on you F*ck, quite your dogf*cking and keep up"

I also wondered about the "source" truck and why they didn't use a Silverado, F-150 or Ram, since they're larger and more capable, but the defining limit is the vehicle needs to weigh less than 5000lbs and be sling loadable or fit inside transport helicopters.

Something like this would fill the light utility vehicle slot like our G-wagon/MilCOT fleet as well when the time comes to replace them, although the rear seats in the loadbed would need to be removable or a trailer hitch added. The fact most of the parts can be picked up at any dealership will be a bonus.

ArmyRick said:
Billy B did indeed change me, Jim.

Watch me with my cattle when we are doing a paddock move and one falls back "Come on you ****, quite your dogf*cking and keep up"
Click to expand...

In who whould have thunk that, he know works at one of the Conflict and Complaint Management centers.

In who whould have thunk that, he know works at one of the Conflict and Complaint Management centers.
Click to expand...

I told Billy B that’s a good place for him - he caused a lot of complaints from higher.

We loved him lol

Hamish Seggie said:
I told Billy B that’s a good place for him - he caused a lot of complaints from higher.

If this is guy I am thinking of, he taught my Basic Para Course.  Jeepers.

SeaKingTacco said:
If this is guy I am thinking of, he taught my Basic Para Course.  Jeepers.
Click to expand...

That would most likely be him, he is quite memorable.

SeaKingTacco said:
If this is guy I am thinking of, he taught my Basic Para Course.  Jeepers.
Click to expand...

There is quite a family dynamic. His dad took the US Army Ranger course at the age of 42, and passed.

I was quite surprised when Billy B asked me to be one of his section commanders on a BIQ we ran in 1994 that included Army Rick as a candidate.

Regarding the weight of under 5000 pounds, my Ram fully fuelled is well over 6000.

The new Rams are probably the nicest trucks out there, IMO.

But if I was looking to bash around off road, I'd take a ZR2 with duramax. And the ISV is essentially that on steroids. Can't really be compared to your run of the mill Colorado.

Good2Golf said:
It’ll be the GM DuraMax 2.8L straight-four. The engine is actually VM Motori’s A428 high-pressure common-rail diesel, built for GM under contract.  Fuel is easy...JP8/multi-fuel...no need to handle ME Gas separately.

I had this engine in a Jeep...it was a beast!  Each cylinder is almost as big as a 750cc motorcycle.  I could tow a 5,000lb trailer no problem.  Torque out the wazoo - more than 300ft-lbs.  In this platform, power and grunt shouldn’t be an issue....only space will be.

You could put 18 of me in one of these things.

Weinie said:
You could put 18 of me in one of these things.
Click to expand...

You sir, win the Internet for the rest of the day! ;D

Weinie said:
You could put 18 of me in one of these things.
Click to expand...

I damn near inhaled a cup of coffee. Jerk.

July 15, 2020: In June 2020 the U.S. Army selected the GM (General Motors) candidate for the new, lightweight, ISV (Infantry Squad Vehicle). The two other competitors were familiar with special operations vehicles, the GD (General Dynamics) Flyer 72 and a variation of the old SOCOM (Special Operations Command) favorite, the Polaris DAGOR. SOCOM was already using Flyer 72 and DAGOR and the competition between these two vehicles for special operations orders worldwide led to the ISV competition. The army took advantage of a new fast-track acquisition program that allows new items to be selected (via competition from existing equipment) in less than 16 months versus the usual 36-month bureaucratic marathon that often went on much longer. Each of the three ISV competitors was given a million dollars to modify their vehicle to meet army requirements. The GM entry was seen as a long shot by outsiders who misunderstood what the GM candidate was.

The third underdog competitor from GM was one of their newest and most popular off-road vehicles, the Chevrolet Colorado ZR2 Bison. This vehicle was introduced in 2016 and is the culmination of two decades of vehicle modification by individual entrepreneurs and companies like GM. All this largely unnoticed work was recognized and merged by GM into their new 21st century off-road pickup trucks. Individuals and small firms modifying commercial vehicles for special uses is something that has been around for decades. Think of this as “vehicle hackers” and you have an accurate view of what is happening. The Chevrolet Bison was very much the right hack showing up at the right time. Vehicle designers in GM saw the army ISV contract, looked at the Bison and it didn’t take long (at least on the computer design software) to turn the Bison into the GM ISV. Removing the commercial shell and the Bison becamer the ISV, with a modified diesel engine and a few tweaks to the suspension and other mechanical components.
Click to expand...

Rest of the article on link. The ISV is surprisingly affordable, especially when you consider the cost of the G-Wagon was almost the same in 1990 dollars. Certainly jumping aboard right now and getting a long production run and economies of scale by buying the ISV to replace the G Wagon and MilCOT would be a useful and sensible solution to both Regular and Reserve mobility.

Just as a slight aside, the GMV/ISV project is part of a broader program to increase the effectiveness of the Infantry Brigade Combat Team (IBCT) parts of which are discussed in other threads.

Linked is a US Congressional Research Service briefing to Congress from last summer on the IBCT Mobility, Reconnaissance and Firepower Programs.

These are all valuable considerations, however, to properly implement them would require the consolidation of our three light infantry battalions into a light infantry brigade.

Note as well one of the comments respecting the six recently formed Security Force Assistance Brigades:

Since SFABs are designed to " generate, employ, and sustain local, host nation or regional security forces" it seems quite logical that they are also capable of being "bulked up" by US Army personnel to form an actual IBCT so long as the equipment for an IBCT is either present within the IBCT or available to issue to the IBCT before deployment.

Note as well General Milley's comments regarding future operations in a multi-domain environment at page 3 and, thereafter, the capability gap in the IBCT that these projects seek to solve.

My only comment of criticism is whether or not the Light Reconnaissance vehicle (LRV) really needs to be on a different chassis of the GMV/ISV or whether it should be a variant of the latter to permit logistic and maintenance compatibility between the two fleets. There is obviously a call for armoured protection of the LRV which is not called for in the GMV/ISV but then again the LRV is planned for a smaller crew and payload the difference in which could go to armour.

Interesting to note as well that as late as last summer, the USMC was showing an interest in roughly 100 MFPs for its tank battalions (presumably replacing some or all of their M1s). Wonder if that interest is still there after their structural changes? 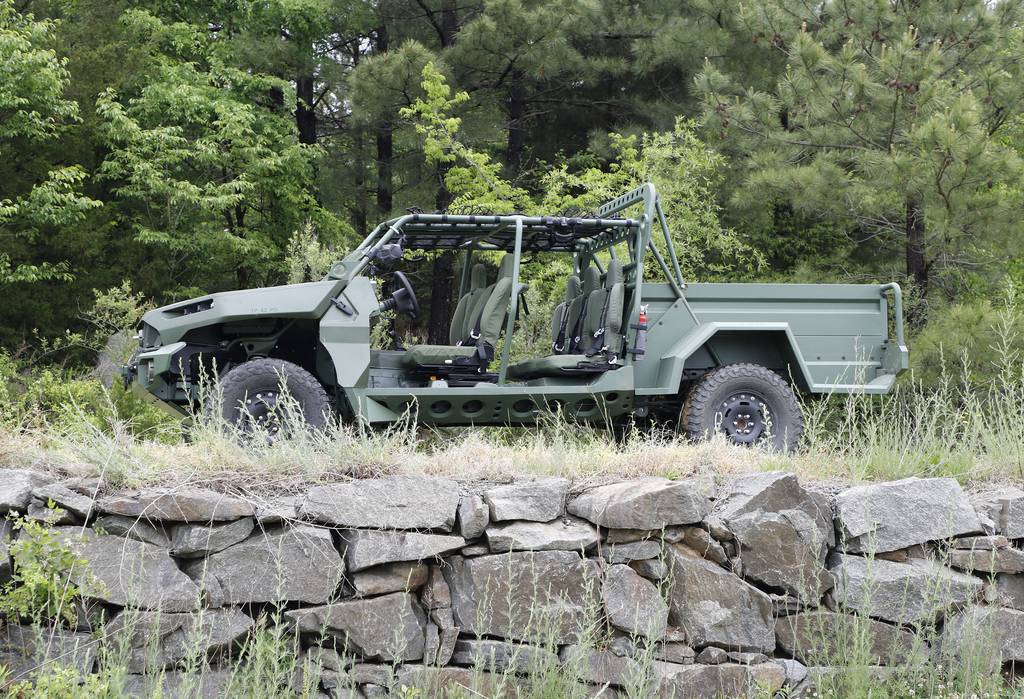 Is the Army warming up to electric vehicles in its fleet?

Companies with commercial experience want to show the Army how capable electric-powered vehicles can be and overcome the challenges of operating them on the battlefield.

Curious to know how battlefield EVs refuel during offensive operations.
You must log in or register to reply here.

2,271 HX2 family vehicles would replace the Bundeswehr's old KAT I generation of