Due to the nature of my profession, I spend a great deal
of time on my feet traversing some of the most difficult
terrain that this country has to offer. I have also
spent a significant amount of time in the jungles of
Central America so it is no wonder that I must have
excellent boots. For several years, I have been wearing
American issue jungle boots. Although they are light weight and
have drain ports, they are not the most comfortable
boots to be walking in all day long. Until now, they were
my only option. I have been to the "Clothe the Soldier"
website and viewed the information about the "Temperate Combat
Boot" with much excitement. I would very much like to purchase
a pair or two and put them through the "wringer" so to speak.

My question is twofold: First, I would like to know who has the
contract to manufacture them and second; can I purchase them.
If anyone knows the answers to my questions, help of any
type would be greatly appreciated. Also I would like to
hear some first hand accounts of these boots as well as any
for the "Wet Weather Boots. Thanks for the help.

Have you guys seen the CADPAT boots? Whats the general thought? I think they would take some getting use to.
S

I‘ve seen a picture of them. Fashionable I might add. Getting used to yes I can understand that. Ugly, yes that to. But, I can see them being effective. Depending on the terrain, I can see a big ‘ol pair of black Cadillac‘s sticking out more than a pair of CADPAT boots. Yet to try on and test out a set of CADPATS (Reservist ‘ya know ), but the pattern I am sure is tested and proven.
T

tell ya what. How about black for Garrison and CADPAT for the field...want to keep up with the fashions...
S

Makes sence. I just don‘t understand that we get CADPAT Helmets, then new Green Gortex, then CADPAT Boony hat, then new black boots, then CADPATS. Then they take away the Gortex or issue some sort of poncho, then CADPAT Boots. All great equipment, just bad timing I think.

As for garrison, why not ressurect a Garrison uniform? Mabye not quite as uncomfortable as the last issue, but would this not make sence or just a waste of money? Mabye keep the presant Fatigues for Garisson? (sorry, getting off topic here)
L

Personally, I think Garisson Uniforms are a waste of money.
T

I thought the original idea was for the OD green uniform to be for Garrison and CADPAT for the field. It appears that changed fast. I bet you the bean counters s**t themselves when they realized how much it would cost to maintain two uniforms.
S

Yeah I heard that as well. I also heard that new recruits would still were the OD‘s and after MOC or whatever it is now, they would be issued CADPAT. Still a money thing though. Probably not to many good sets of OD Combats left in the system.
S

kind of off topic but what unforms do reservist‘s get? cadpat or the reg olive drab or both?
R

The recruiting officer at my regiment was telling me that reservists will be getting all the same cadpat issue as the regs, but with the budget stuff going down now, I wouldn‘t hold my breath.

by the way, does anyone have pictures of the boots?
T

Evergreen is correct. The reserves will be issued CADPAT. In a way, its only right and should never be any question. Personally...if they did not issue reservists the same uniform...it would be a slap in the face...and perpetuate the "us and them" attitude..that‘s my opinion. Also, if its of any comfort, there are already members of my unit that have recieved their CADPAT and were told to turn in there OD.

That‘s nice to hear Digger. Out west I have only seen a couple of recruiting officers wearing it. If some of you guys have it, it must be coming down...

CADPAT boots! I hope this is just an example of the CTS going CADPAT crazy, and not something that will be seriously considered. I mean the new CWWB is all black, does that mean the next run of them will be in CADPAT leather? :^) Does this mean we‘ll have to have 4 tins of boot polish(L. Green, D. green, black,and that light brown) and apply each colour carefully w/ a q-tip!! Still looking at the boots though, it probably woyuld have been more practical to make them in black leather, w/ cadpat cordura panels like Danner Acadias. That‘s just my call on the matter, on the other hand any further details on CADPAT clothing (what in particular??)allotment/distribution to us poor slobs out here in the West! :^) 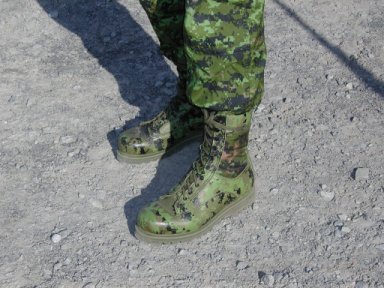 They‘re testint the durability and the leather‘s retention of the pattern now but I don‘t think that the results will be positive. The "paste" that is used on the boots is the same as the Prospector black paste, only it‘s clear.
R

Although I can see the benefits to a "total Cam" outfit, sounds like a pricey, hard to maintain item. Are there any other armies in the world using these on a regular basis?
L

Im sure the CADPAT boots can only add to the effectiveness in the field, but I‘m not sure Id like to see them on parade. There‘s something about seeing your reflection in shiny black boots that seems fundamental to military life. When I was in the militia, I took alot of pride in getting dirty worn-in boots to shine like the sun (even though I used to burn-shine them, something I heard was ‘illegal‘ -any truth to this?). I used an old peice of pantyhose that got the shine out really nice.

Those boots are NASTY!!!

OK, type for the 2 cents from the West Coast reservist
Yes, the reserves will be getting the CADPAT uniforms... distribution is "supposed" to be finished by spring 2003, but it may take longer considering the breadth of distribution. The rest of the Gucci kit; load bearing vests, new rucksacks etc. are WAY further down the line, but yes, we are supposed to be getting those too...... eventually, like with everything else in the reserves. Of course, if you‘re in a recruiting position, near a major reg force base, or are on an operation, you get the new kit much, much sooner.

By the way, why can‘t we use jungle boots or desert boots in the field? Those boots are FAR superior to combat boots, and don‘t look horrible.

Also, this whole "rank in the front on a CADPAT background" thing is very annoying, especially as an NCM. By the time you figure out you‘re near an officer, you barely have enough time to get you arm up for the high five. Bloody eye sore if you ask me.
N

I‘m a "Maggot" from Montreal, and we got our CADPAT at the end of July...the whole regiment if wearing relish now...

So everyone (everyone Reserve, that is) way down east is wearing CADPAT already?

I‘ve been hearing rumors about it being issued out to us in the west (41 CBG) by the end of September or October, but I‘m quite weary of those rumors.
U

Saw the pic‘s of the Cadpat boots. Seems pretty stupid to me. The cost of dying the leather cadpat has got to be pretty pricey.

CTS should have a look at the new boots that the Marine Corps is getting.

Check out the boot icon for more details.

You can also check out http://cgi.ebay.com/ws/eBayISAPI.dll?ViewItem&item=2137134075
For a look at the Jungle/Desert version.
You must log in or register to reply here.

A
Purchasing Combat Boots in NCR

My University Sacrificed Ideas for Ideology. So Today I Quit.
2 3