To scrim or not to scrim?

Yes and no. For example:

No: Where night ops require you to wear night vis

When securing a bridge in the middle of an urban centre:  No

CBRN: No scrim, no helmet cover either

IMO the only time scrim is relevant is in a defensive position... Other than that it is pointless.

Journeyman said:
When securing a bridge in the middle of an urban centre:  No

If I recall that movie correctly one of the officers pointed that out around that time.

When using an extreme bright green against a recently and freshly painted white door and under Hollywood lights, it is ineffective.

GnyHwy said:
When using an extreme bright green against a recently and freshly painted white door and under Hollywood lights, it is ineffective.
Click to expand...

Agreed.  The lad wearing the beret is much more effective.
M

daftandbarmy said:
No: Where night ops require you to wear night vis
Click to expand...

From my experience, scrim doesn't interfere/get in the way of the NVG or mount(I assume this is what you are referring too). Not having scrim immediately around the NVG mount, and ensuring no scrim is long enough to move in the way works for me.

Schindler's Lift said:
Agreed.  The lad wearing the beret is much more effective.
Click to expand...

see he was more effective then 8)

I wonder if anyone has ever lost their helmet after putting it down with scrim on it. There's no way the CoC could deny THAT lost kit report...

Yes scrim.  Breaks up shape, silhouette and texture.  Nothing shows up more than a stupid perfectly round helmet.

Or better yet "How Not To Be Seen"

Yes scrim because it breaks up the nice straight lines of your helmet. Also, just a thought here, there's something to be said about a section of cammed up, predator looking types attacking your position in terms of intimidation.

IMO on the offensive scrim serves no purpose. It will be movement that alerts the enemy to your presence long before the shape of your helmet does. That and I'm sure the defenders won't think that they're being attacked by a company of wild bushes. If you're on a recce or any other type of sneaky peeky stuff you'll be wearing soft caps and likely won't be operating in anything bigger than a 4 man patrol so scrim does become more relevant.

While on the subject, what's the deal with the over sized Israeli scrim? They look like they are all wearing some sort of sad culinary garb.

whiskey601 said:
While on the subject, what's the deal with the over sized Israeli scrim? They look like they are all wearing some sort of sad culinary garb.
Click to expand...

They sure do break up the helmet outline .... 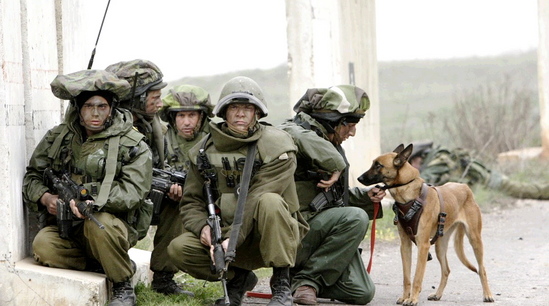 T hey can carry a large Domino's tucked up in those things.

The Mitznefet is a covering for the infantry helmet used by the Israeli Defense Forces as of 1994. It is considerably larger than the helmet, giving the impression of a militarised chef's hat. The purpose of the floppy helmet cover is to break up the distinctive outline of a helmeted head and thus assist in the camouflage of the wearer. It was originally adapted in the 1990s for guerrilla warfare in the wood and bush land of south Lebanon, later adding a two sided camo, one for desert and one for woodland terrain. The Mitznefet is easily removable, and can be attached to the helmet while folded.
The term comes from the mitznefet, or turban, worn by the high priest in the Temple of Jerusalem, originating in a Hebrew language root meaning "to wrap".
You must log in or register to reply here.