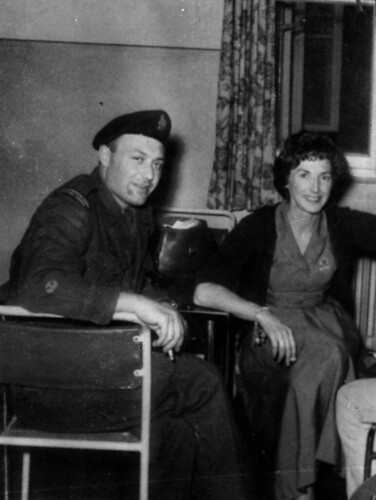 I am trying to trace my natural father. The info is extremely sketchy, but I have a photo (ABOVE)
Below is a recent photo of myself: 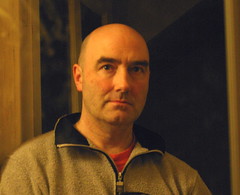 Here is a summary of what I know:
He was/is French Canadian.
He was a Private with the Royal Canadian Army Medical Corps (RCAMC) when he met my mother.
He would (most likely) have been born between 1915 and 1930.
His first name was Andrew, though he might also be known by the French equivalent, Andre (SURNAME UNKNOWN).
I have been told that his uniform identifies him (apart from being in the RCAMC) as wearing the sleeve badge of someone who is a qualified Tradesman, Class II.
He was stationed at one of two bases (Fort St Louis or Fort Chambly) near the towns of Werl and Soest in N. Germany in 1956. My mother met him there in 1956, while working for the WVS. Her name was then Sheila MacAllister
(the photo shows them sitting together in 'The Canteen Club' at Fort Chambly).

I was born in London in 1957, and brought up in Dublin, Ireland, by my mother and grandparents. I had a happy and secure childhood, and was never made feel acutely conscious of my father's absence. However, as I grow older that absence is becoming more pronounced, a presence in its own right. And the fact that I have one, haunting photograph of him (and that he looks strikingly like me: see pic above) makes my search seem still more imperative.

If anyone recognises the soldier sitting with my mother, or has any information they think might be relevant, please contact me at:  markgranier@yahoo.co.uk

I certainly feel for you.  Years ago, while taking part in the Nijmegen Marches in Holland, our group was approached by a Dutch woman who was trying to track down her wartime father.  All she knew was a first name, his unit, and that he was a Canadian soldier.  I can't imagine how daunting the task must seem.  You certainly seem to have a bit more, with this picture, and his insignia.

A couple of ideas might be to check out on-line chat rooms where 'base brats' from the old NATO bases like to exchange information.  I found one quickly at http://www.derkanadier.de/gaestebuch/indexa.html that had people who were posted there in the 60's.  If you can find someone who was born on the base, or was raised on the base in the 50's, there is a chance that their mom and/or dad is still around and can take a look at the photo.  The other option is to contact the National Archives of Canada and see if the base/units documents are available for viewing yet.  If you can find some personnel lists that also mention their branch affiliation you might be able to narrow down your search to a few hundred, than dozens, and hopefully the one you are looking for.  Once you get some names, and if you can get a hometown, you can go to CANADA 411 and start cold calling people with that surname in that town.  Might be hard though if you don't have someone who can speak French, but you never know.

I can tell you that you won't be able to draw service records through the archives.  They treat privacy very seriously, and it would be next to impossible.  Good luck with your search.  I hope you find what you are looking for.

4 Field Ambulance ( It was named 38 Field Ambulance until 1953 ) was stationed
at Fort Chambly W. Germany from Sept 1955 to Sept 1957 with 2 Canadian Infantry
Brigade (CIB).  It came there from Valcartier Quebec, where it had been stationed
since 15 April 1954.

Thanks a million, both of you. This is immensely helpful and encouraging. Haven't time to write more now, but I really appreciate your prompt responses.
B

This Ruhr Memories site is linked to our Lahrbrat site...hope it helps.

Thank you for the link. Your kindness is greatly appreciated, and the link may well prove helpful.
M

I am trying to trace my natural father. My mother believed his first name is Andrew (or perhaps Andre). Unfortunately, I do not have his surname.
What I do have is a photo of him in uniform, which my mother gave to me. She met him while working at a Canadian Army base in North Germany (near the villages of Werl or Soest) in 1956. The full story, including the photograph, is on my blog, on the following link. If you have a moment please check it out: http://fatherfinder.blogspot.com/2009/02/i-am-trying-to-trace-my-canadian-father.html

Here is a summary of what I have learned, including information sent to me by Canadian ex-service personnel:

He was/is Canadian (my mother believed he was French Canadian).

He was a Private with the Royal Canadian Army Medical Corps (RCAMC) when he met my mother.
My mother was born in 1918 so she would have been 38 in 1956, the year I was conceived. The photograph suggests (to me), that my father might have been a little younger so he may have been born between 1920 and 1925, or even later.

His first name was (according to my mother) Andrew, though he might also be known by the French equivalent, Andre (SURNAME UNKNOWN).

I have been told that his uniform identifies him (apart from being in the RCAMC) as wearing a "Group B Tradesman" patch (or that of a qualified Tradesman Class II, if these are not the same thing).
Someone (very possibly) with 1 Field Ambulance, stationed at Fort Anne or Fort Chambly (one of a number of bases near the towns of Werl and Soest in North Germany in 1956. My mother met him there in 1956 while working for the WVS. Her name was then Sheila MacAllister

The photo shows them sitting together in the canteen (presumably at Fort Anne or Fort Chambly).

I am a writer, photographer and teacher of creative writing based in Dublin, Ireland. All I want to do is learn something about my origins, those invisible branches on my family tree. ANY information or advice is welcome. If anyone has any ideas please don't hesitate to leave a response. Thanks for taking time to read this.

Mark, I've down loaded the picture and will be speaking to my former mother-in-law who was in Werl in that time frame. Her husband was RCAMC. Unfortunatly he has passed on and she is in the early stages of altzheimers, but still has long term memory. I also know of some one else (distant cousin) who served there at the same time in Werl. I'll check to see if I can track him down.

Hi there, I know it's years since you posted here, and I guess you would have let me know if there was any response to your inquiries, but I just thought I'd check in.
Best,
Mark Granier
You must log in or register to reply here.

A legend has passed; Kirk Douglas dead at 103.