First FCS does not go well, then this: 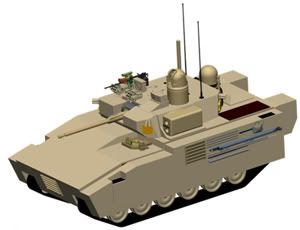 WASHINGTON, Aug 25 (Reuters) - The U.S. Army canceled a multibillion-dollar combat vehicle competition and said it would issue revised rules for a more affordable program within 60 days, delaying a contract award by up to six months.

The Army on Wednesday said it would revamp the terms of the competition after a review done with Pentagon acquisition officials showed risks in proceeding as planned.

The unexpected change to the Ground Combat Vehicle (GCV) program threatens jobs as well as revenue for the competing teams of companies and marks another setback for the Army's effort to develop new infantry vehicles.

The prime contractors bidding for the program are: Science Applications International [SAICI.UL], Britain's BAE Systems (BAES.L), and General Dynamics Corp (GD.N), and their subcontractors include many of the largest U.S. defense contractors, such as Lockheed Martin Corp (LMT.N), Boeing Co (BA.N), and Raytheon Co (RTN.N).

The Army is studying the impact on its fiscal 2011 budget request, which called for $934 million to start development of prototype new vehicles.

Once in production, the program would cost tens of billions of dollars, but Army officials say the scope will not be clear until it decides what kind of vehicles and how many to buy.

The new program was developed to replace the ground vehicle part of the Army's Future Combat Systems (FCS) modernization program, which Defense Secretary Robert Gates canceled in April 2009, saying it had not kept up with changing wartime demands.

The companies submitted bids in May and expected a contract award next month. The plan had been to award up to three teams development contracts to build prototype vehicles.

The companies were notified about the Army's decision to early on Wednesday, just before the public announcement. Company executives said they would wait for further details.

The Army's decision to postpone the ground vehicle acquisition comes just days after the U.S. Navy said it was putting off a contract award in its biggest new acquisition program for a new coastal warship.

A decision on the Air Force's biggest acquisition program, for new refueling tankers, has also been delayed, fueling speculation among some industry executives that the Obama administration is trying to postpone potentially controversial contract decisions, and possible job losses, until after the mid-term elections in November.

Paul Mehney, spokesman for the GCV program, said the Army still expects to deliver the first new combat vehicle to U.S. troops within seven years from the date of the contract award.

Rickey Smith, a senior official with the Army's training and doctrine command, said the decision would avert bigger problems later. "We did it because it's the right thing to do," he said. "We could have done it better up front but it's better to make a change before you overcommit in a contract."

He said the move also showed that acquisition reforms pushed by Congress and Gates were beginning to take hold at the Pentagon, and stood in contrast to earlier days when program adjustments might have been made after a contract award.

Mehney said the change was decided independently of industry proposals, and did not reflect any specific concerns about the weight or characteristics of the vehicles proposed.

Army officials weighing the change were "not even privy to that information," given that the industry proposals were in a closely-held "source selection" process from May, he said.

"The Army seems to be losing its way on vehicle modernization and undercutting the ability of its suppliers to meet future needs," said defense analyst Loren Thompson of the Virginia-based Lexington Institute.

Thompson, who has close ties to industry and defense officials, told Reuters the decision was particularly troubling to the armored vehicle industry since the Army was also rethinking its plans replace its workhorse Humvee vehicles.

Engineering jobs could be in jeopardy as a result of the delays, he said, adding the Pentagon could also still decide to put its increasingly scarce dollars into modernization and upgrades of existing tanker and Stryker vehicles instead of proceeding with the new ground combat vehicle program.

They concluded that the program needed to be revamped to ensure the program stayed on cost and schedule. (Reporting by Andrea Shalal-Esa; Editing by Leslie Gevirtz, Steve Orlofsky, Robert MacMillan and Bernard Orr)
Click to expand...

I think part of the problem is absorbing the lessons learned over the last eight years and properly defining what they actually want. They also don't want to get burned again like with the FCS program, where billions were spent on PowerPoint slide shows, but no practical equipment ever came from the program.

From other things I have read, there are big arguments over where the priority needs to go: protection, mobility or firepower. We have seen the vast increase in size and cost due to increasing the protection of "utility" vehicles (Compare the MRAP class of vehicles to the HMMVW), and logistic factors need to be considered as well; giant vehicles need large support trains as well.

If massive, well protected vehicles are the wave of the future, more firepower will be needed to defeat them, which adds to the expense. Larger vehicles also have mobility issues, which also impact on how future operations can be conducted.

If the Army really needs to get a "quick fix", they might consider adopting existing vehicles like the CV-90 family or the K-21 IFV from Korea (The K-21 is actually an updated clone of the M-2 made of advanced composite materials, so tactical and organizational changes would be minimal). I doubt the political environment would allow for that although by the time the vehicle was kitted out with US military equipment and "modernized" with things like serial electric engines, remote weapons mounts and active protection systems, military contractors will probably have received as much money as they would have from a scratch built vehicle.
You must log in or register to reply here.

In new directive, US Army reins in Army Futures Command