The RAF Voyager "Vespina" has completed its refurbishment to provide a secure, cost-effective and suitably profiled transport for Government Ministers and the Royal Family. The aircraft now proudly displays the Union Flag alongside RAF markings and is ready to represent the UK across the globe.

The smart new paint scheme will promote the UK around the world while transporting Ministers, senior members of the Royal Family and their delegations on trade, diplomatic and other missions. 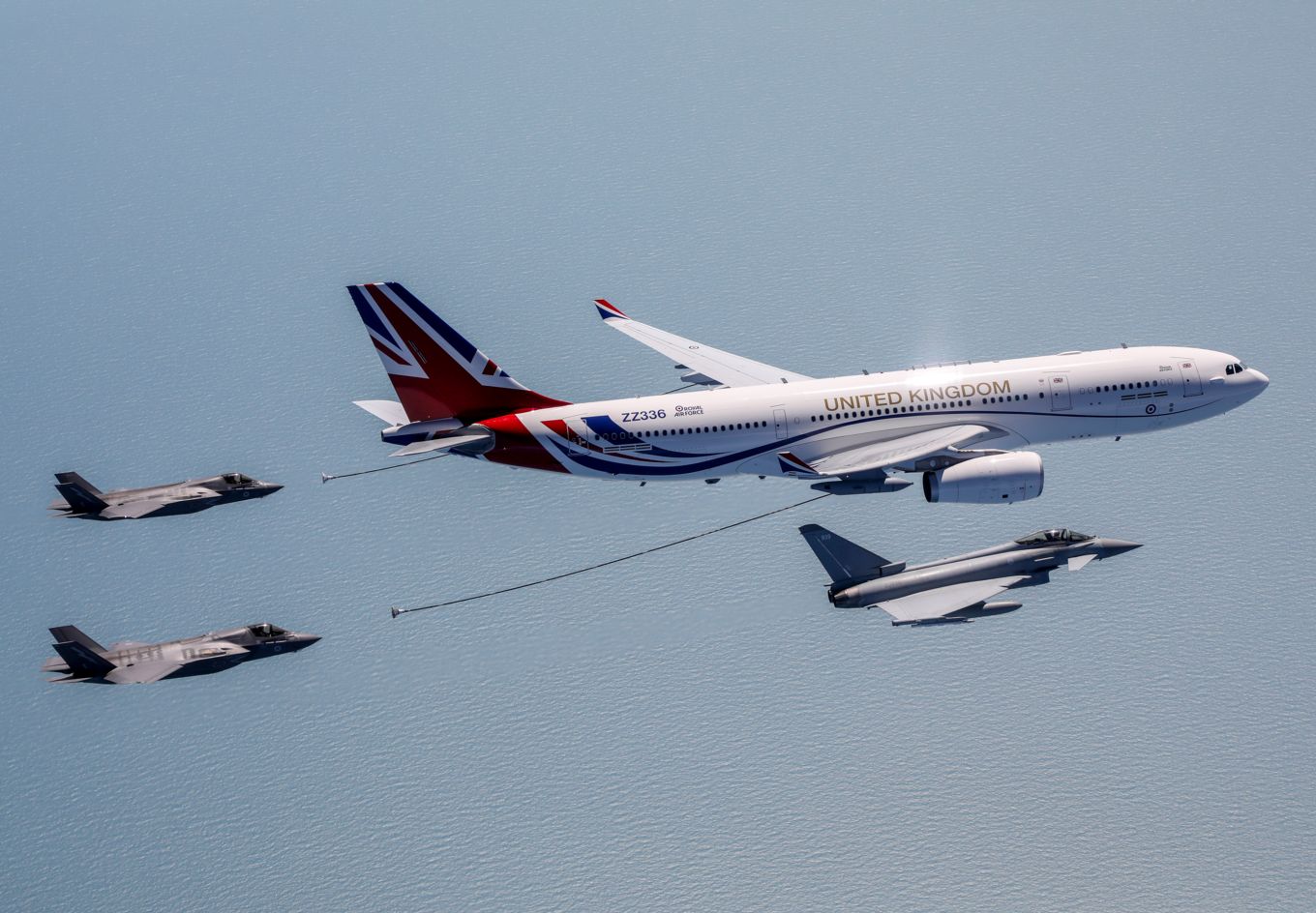 After weeks of work, the Voyager returned to RAF Brize Norton where it will operate alongside the rest of the RAF Voyager fleet. Alongside its VIP Role, the aircraft remains certified for its original use, including Air-to-Air Refuelling and personnel transport. It can fly from and to almost any airport across the world that can take an Airbus A330, and its range allows it to reach much of the world without costly and time-consuming refuelling.

The Project was not only about the visual design, this was a complex engineering project requiring detailed drawings which were developed by AIRBUS. Marshall Aerospace and Defence Group were then chosen to deliver the project on time and within budget.

The Voyager is a hugely capable tanker, able to carry up to 111 tonnes of fuel, the highest capacity of all tanker aircraft, with the ability to dispense 50,000 kg of fuel to a broad range of aircraft during a four-hour loitering mission at over 1,000 nm from its take-off point.

Nice looking livery.  But here in the colonies we wring our hands at such shows of extravagance (hello, 24 Sussex).

lenaitch said:
Nice looking livery.  But here in the colonies we wring our hands at such shows of extravagance (hello, 24 Sussex).
Click to expand...

Yes, but we can't keep our nice things nice - we crash them into walls (accidentally, of course).

dapaterson said:
Yes, but we can't keep our nice things nice - we crash them into walls (accidentally, of course).
Click to expand...

I was using the royal we for Canada, not we the CAF or RCAF.  But point taken.

SeaKingTacco said:
To be fair- that was L3.
Click to expand...

Thanks SKT. I spent about 25 minutes struggling with a reply and gave up.

Oh, I know, and there was much tsk-tsking when that rolled out.  Plus the downplaying of the VIP role in the recent Challenger announcement.
C

I genuinely hate to say this about our citizenry in general, but Canadians are cheap cheap bastards when it comes to anything government.

And the media doesn't help...over the last year or so, I've grown to actively distrust and resent the media, rather than just shake my head & ignore it.


We are a G-7 country, and as such our elected leader should have his own secured means of transportation.  Yes, that means a plane.  Like every other leader of 1st, and even 2nd, world countries.  His or her travel schedule & security requirements are unique, and that requires them to have their own transportation to events around the world.

Senior cabinet ministers should also have access to secure flights, and sometimes those flights are on short notice.

Canadians expecting our PM, or Ministers of various departments, to fly commercial right beside our neighbor Bob, are out to lunch.  A few small execute jets, made in Canada nonetheless, for government use, is perfectly reasonable.  :2c:


(On that note, how much of the 'outrage' is actual outrage?  Or is it media generated headlines, saying people are outraged, when in reality, a vast majority of folks don't care?)

Its manufactured partisan outrage. Media runs a headline to get clicks and fuel anger from hyper partisans. No one cares about making their own opinion anymore, they want to be spoon-fed what to think.

I completely agree with you. 24 Sussex and an aging A320 are a joke for a G7 country leader. No one is asking for gold-plated opulence, just practical transportation/housing that shows a little bit of the wealth we have as a country.

PuckChaser said:
I completely agree with you. 24 Sussex and an aging A320 are a joke for a G7 country leader.
Click to expand...

I'll give you three guesses whether Airbus still manufactures them, or if any major western airlines still use them extensively.
D

I'll give you three guesses whether Airbus still manufactures them, or if any major western airlines still use them extensively.
Click to expand...

Now would be an excellent time to upgrade our fleet of Airbuses, with good prices on low hour airframes.
You must log in or register to reply here.

Remains of unknown soldier to be repatriated for St. John's War Memorial's centennial

CAN FORCE ONE grounded in hangar accident
2 3 4

Canadians with the RAF and RCAF in the Battle of Britain