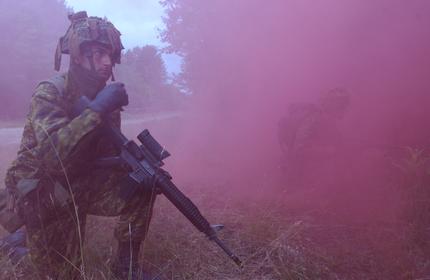 The development of the C7 paralleled that of the M16A2 by Colt. A Canadian Forces Liaison Officer worked with the Marines in the M16A1 Product Improvement Program and relayed information to Canada's Rifle Replacement Program Office. The C7 for all intents and purposes is much like earlier M16A1E1s, rather than final product M16A2s. The earliest C7s were actually manufactured by Colt for Canadian Forces as the Colt Model 715. Like earlier M16s, it can be fired in either single shot or automatic mode, instead of the burst function selected for the M16A2. The C7 also features the structural strengthening, improved handguards, and longer stock developed for the M16A2. Diemaco changed the trapdoor in the buttstock to make it easier to access and a half-inch spacer is available to adjust stock length to user preference. The most easily noticeable external difference between American M16A2s and Diemaco C7s is the retention of the A1 style rear sights. Not easily apparent is Diemaco's use of hammer-forged barrels. The Canadians originally desired to use a heavy barrel profile instead of the M16A2 profile, but Colt denied permission. Also, Diemaco has developed a different mounting system from Colt for the M203 grenade launcher for the C7 rifle family.

The C7A1 (Diemaco C7FT) replaces the iron sight/carrying handle used on the C7 with a modified Weaver rail for mounting optics. Canadian development of rails preceded American standardization of MIL-STD-1913, aka Picatinny rail, so "Canadian Rail" or "Diemaco Rail" slightly differs. There are 14 slots instead of 13 and each slot is narrower. The height of the rail is also lower, allowing usage of normal front sights. MIL-STD-1913 requires a different front sight assembly. During development, the original rails were vacuum-bonded to the top of a bare receiver though for production the rail and receiver were made out of a single forging. The mount can use traditional iron sights or the Elcan C79 3.4x power optical sight, both of which can be adjusted for individual eye relief. The optical sight was designed for the C9 light machine gun and includes horizontal and vertical mil-bars used for range determination and deflection, and a tritium glow-in-the-dark aiming parapet rather than the tradition crosshairs. The 3.4x is powerful enough to properly see targets at the maximum accurate range of 400 m, though like most magnified optical sights it is prone to criticism for creating tunnel vision in close quarters situations. While the wide aperture helps to speed target acquisition, Canadian soldiers generally eschew the C79 sight in favour of nonmagnified optical sights or backup iron sights when engaged or training in close quarters. The front sight was changed to a round post 0.050 inches in diameter, from the square post.

The C7 was originally issued with a black web sling (with white slings also produced for parades). A black 'patrol sling' has been introduced allowing carriage of the weapon more comfortably in the ready position.

The C7 and C7A1 both have a bayonet lug; on 1982 Pattern Webbing the bayonet was carried in a nylon frog on the waistbelt; on newer generation load bearing devices like the Tactical Vest (TV) the bayonet is mounted vertically on the wearer's upper torso.

Small cleaning kits are stored in the butt trap of the weapon, including pull through and CLP bottle in a nylon carryall.

The C7 as built by Diemaco is a licensed copy of the US M16A2 with many minor and major differences. While the earliest models of US M16s gained a reputation for unreliability in the Vietnam War, improvements to the original M193 ball ammunition as well as modifications to the weapon itself (such as the forward assist) have resulted in a very satisfactory infantry weapon. The C7 has benefited both from design changes to the M16 as the result of combat experience in Vietnam as well as 40 years of service life, as well as changes made to the US design by Diemaco, including a heavier barrel with a 1:7 rate of twist.

The chief weapon of many of Canada's real or potential adversaries is the AK-47 family of weapons, dating back to 1947 and the original Kalashnikov weapons engineered from the German Sturmgewehr 44. Weapons captured in Iraq have included Russian, Chinese Communist, Polish and Romanian weapons. Subsequent weapons have included the AKM introduced in 1959 and the AK-74, introdued in 1974. The latter fired a 5.45mm x 39 round, using an improved bolt, new muzzle brake, and different folding stock.

According to one former CF armourer, "Overall the AK family of weapons are traditionally robust and the use of them is easily taught to inferior less trained troops, so even the village idiot can figure it out." [1]