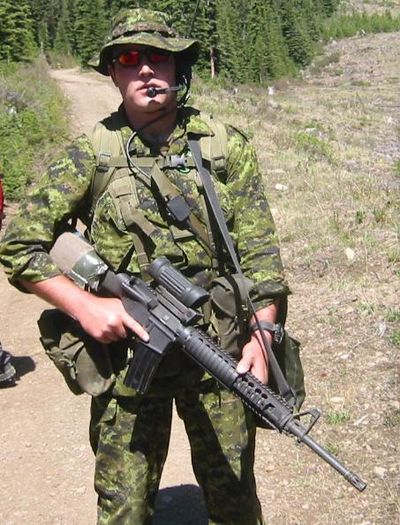 The C7A1 had been criticized especially by 1VP in Kosovo as being cumbersome, and very awkward to adapt to night operations - so much so that members where often stuck with a pistol during some operations since in body armour they could not effectively use the C7A1 with its fixed buttstock. A Company, 1PPCLI had been lent a number of KAC (Knights Armament Company) M5RAS (Rail Accessory System) that provided an aluminum M1913 Picatiny rail handguard for the attachment of flashlights and Infra-Red lasers (at that point the Insight PAC4A and B). Similarily a large quantity of the C79 ELCAN scopes were non-servicable due to wear (or poor design) so something was going to have to be done about the Forces' principle small arm.

The time frame conincided with the fact the USMC had recently released a requirement for the M16A4 - which was effectively a M16A2 with a flat-top receiver (a la C7A1) with a M5 RAS, the US Army had decided that they required a shorter modular weapon and had ordered full scale transition from the M16A2 to the M4 (and M4A1 for SOF).

For reasons that still baffles the Land Force, the LCMM and Diemaco quoted the Army $834.93 for each M5 RAS when the Army went to consider a modular handguard section. Having seen the memo from KAC to Diemaco (right of first refusal on small arms contracts) the CF was to pay $220 USD -- or at then current rate of exchange $305 Cdn (FOB Vero Beach Fla.) The Army balked (and ignored the testing that had lead to the SOPMOD RIS/RAS) and adopted the Diemaco designed TRIAD-1 (or pitchfork as I like to call it).

Due to both budgetary concerns and the desire of the Infantry Corps RSM to have a weapon suitable for rifle drill (not SMG drill) the 20" barrel was retained - despite the desire and recommendations of the soliders that had been deployed to Kosovo to adopt a flat-top version of the C8 for Infantry usage.

As well, despite soldiers desiring a more robust scope than the C79, a program was put to replace them with the C79A2 - effectively the same scope that has an upgraded mount and available in civilian circles. No effort was made to obtain a Close Combat Optic that the US and Allies had been leaning to since the Somalia conflict.

Then several addtions where decided upon in order to make the weapon easier on left handed firers. A modified version of the Norgon Ambi-Catch was added to the mag could be released from either side of the weapon, however for reasons unaware the Diemaco version had less of an engagement surface and was easily bumped and the mag would fall out -- After speaking with Robert Garrett president of Norgon LLC he went to Diemaco and corrected their error. Apparently someone had thought with less engagement surface it woudl make for faster reloads...

A "tactical" charging handle was added - the idea was that left handed personnel could charge the weapon easier without removing their hand from the pistol grip this way -- however it was a large piece of metal that stuck out from the weapon -- getting tangled and bent often.

When 3PPCLI returned from Afghanistan with the first "real" combat deployment since Korea a number of weapon modication recomondations where made specifically to adopt the C8SFW en masse for the Infantry.

In DLR 5-5 Maj Louis DeSoussa was listening however he had a limited budget and a LCMM that beleived he knew better.

Roto2 Op Athena was the first widescale issue of the C7A2 -

What the end state was 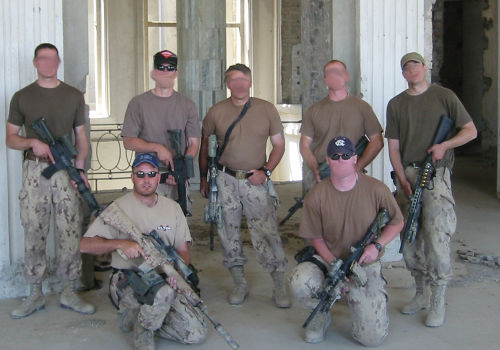