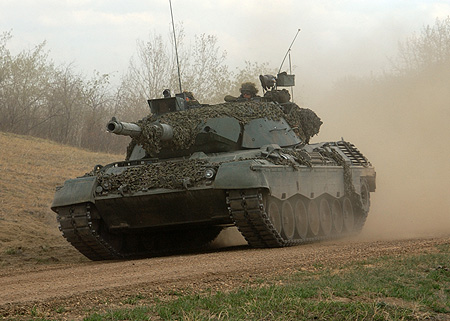 The C2 is an updated Leopard 1A5, which was developed in Germany in the 1980s. This tank deploys with a crew of four, including a commander, a driver, a gunner and a radio operator/loader. The 105-mm L7A3 gun is capable of engaging targets day and night, while on the move under adverse weather conditions, through the use of a fully stabilized fire control system with an integrated thermal imaging system and laser range-finder. The Leopard C2 Tank is also fitted with a gunner’s secondary fire control system and a commander’s fire control system. It has two 7.62-mm C6 machine guns. One is mounted inside the turret and another can be mounted externally on either the commander's or the loader's station.

Spall liners have been added to the refurbished Leopard 1A5 turrets to increase crew protection — slightly reduced interior room being considered an acceptable trade-off. Protection was further improved by the application of add-on MEXAS composite armour panels. But, the Leopard C2’s EMES18 fire-control system with its thermal night sights made the biggest tactical difference. [1]

The Leopard C2 tank is also fitted with two banks of four smoke grenade launchers on the turret. The tank may be “sealed-off” against nuclear-biological-chemical (NBC) threats. It is a minimum-maintenance armoured fighting vehicle and complete replacement of the engine and transmission is possible in 30 minutes under field conditions. When properly fitted with a conning tower, it is capable of deep-fording or submerged fording where riverbanks are prepared for exit and entry.

Reproduced here under the terms of the DND Non-commercial Reproduction notice availible at:[4]