A sniper is an infantryman specially trained in the art of camouflage and long-distance shooting. The sniper trade is very small, and very selective. Only the Regular Force employs snipers; reserve soldiers do not receive sniper training.

In order to be considered for the Sniper Course you need:

Upon graduation, about 1/3 of fully trained snipers in the Canadian Army are actually employed in that role. 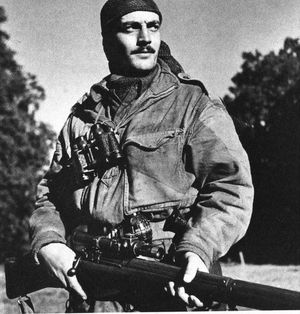 Sergeant H.A. Marshall of The Calgary Highlanders, photographed in Belgium in September 1944. He carries a No. 4 Mk I*(T) rifle, factory tested for accuracy.

The term sniper originated in the British Army in 1824, though the origins of same go back to the 1770s. The verb "snipe" was used by British soldiers in India to refer to shooting from a hidden location - an allusion to hunting the game bird "snipe". Those skilled in this type of shooting became referred to as "snipers" and the term was made an official military term.

Other terms have been used in history, for example "skirmishers" in the American Civil War performed similar duties, deploying individually on the flanks of moving formations.

In the First World War, Canada adopted the practice of using snipers armed with accurate rifles and precision optics to deploy as individuals or in two-man teams to fire at targets of opportunity. In the Second World War, each Canadian infantry battalion had a Scout and Sniper Platoon, where snipers were not just trained marksmen but also scouts who collected information for the battalion's Intelligence Section.

In the last few decades the term 'sniper' has been used rather loosely, especially by media in association with police precision riflemen, those responsible for assassination, any shooting from all but the shortest range in war, and any criminal equipped with a rifle in a civil context.[citation needed] This has rather expanded the general understanding of the meaning of the term. It has also given the term 'sniper' mixed connotations. Alternative terms are usually more specific, especially for police snipers such as "counter-sniper", "precision marksman", "tactical marksman", "sharpshooter" or "precision shooter", some of which have also been used for a long time.