A repatriation ceremony will take place on Wednesday May 6, at 8 Wing/CFB Trenton, for the six Canadian Armed Forces members killed in a helicopter crash during Operation REASSURANCE. Following the ceremony, the motorcade will proceed to Toronto, via the Highway of Heroes.

As space is limited, in order to respect physical distancing, we ask that media pool their coverage of this event.

What:    Media opportunity for repatriation of fallen CAF members at 8 Wing/CFB Trenton.

Thank you for posting the details. We are planning on making the drive from Woodstock to pay our respects along the route. We will find a spot that we can stand as a family while still social distancing. This is the first time we have had the honour to attend as we lived in P.E.I. until 2014.

Our deepest sympathies and our prayers go out to all affected by this tragic accident.  :yellow: :cdnsalute:

Tragically, STALKER was close enough to home that members of HMCS Fredericton witnessed the crash.

OTTAWA -- Crew members on board a Halifax-class frigate personally witnessed last week's helicopter crash that killed six Canadian Armed Forces members off the coast of Greece, the Department of National Defence has confirmed.

The revelation Monday follows initial military reports that the Cyclone helicopter was missing after contact with HMCS Fredericton was lost, suggesting the aircraft was far from the warship when it went down in the Ionian Sea.

It also comes as the Forces prepares to hold a ramp ceremony on Wednesday for those on board the Cyclone even though the remains of five of the fallen have not been recovered and identified.

Defence Department spokesman Daniel Le Bouthillier confirmed to The Canadian Press that some of the crew on board HMCS Fredericton watched as the Cyclone helicopter went into the water while returning from a NATO training exercise.

Le Bouthillier did not say how many crew members saw the crash nor did he say how close the helicopter was from the frigate at the time. However, he said "as part of their investigation, the flight-safety investigation team will conduct interviews with these eyewitnesses."
Click to expand...

PuckChaser if true that sure looks like the Forces creditability is questionable.
B

X Royal said:
PuckChaser if true that sure looks like the Forces creditability is questionable.
Click to expand...

I think they passed on what they could when they got the info. Was there any reason to correct what was already released (it wasn't wrong per se, just not complete) before they got a fuller picture?

I know they always spin a story, but I don't think it was malicious.

Some of the "experts" being quoted do not have sufficient information to do anything but speculate.

I still think, and always do in aircraft incidents, that everyone should just let the investigators do their job.

Also, it was also reported Friday at some point that the helicopter was "within 2 miles of the ship".  "Contact" has more than one form;  visual, sensor and radio all come to my mind immediately as a military aviator.

X Royal said:
PuckChaser if true that sure looks like the Forces creditability is questionable.
Click to expand...

Tell you what.  When the press stops referring to sailors/aircrew as soldiers/troops then I'll begin to question the credibility of Forces press releases regarding military operations.  Until then I'll just assume the media is ignoring nuance like they normally do.

Saw the photos of the ship's ceremony today. The coffin followed by the headdress with no hats. I've met their CO a number of times.  He looked like he aged 20 years.  I can't imagine the stress and pressure that man was under.  And now the ship has to carry on with the "prison" deployment.

There was a quote that I pulled from a book a while ago (can't recall which one) - I'll inject it here.

When we lost LS Leblanc in 2005 off the coast of Poland, the ship, and the entire NATO fleet searched for him until we could do no more.

We finished the exercise and put into Gdansk.  We had a ceremony at a local church/cathedral in commemoration.

We sailed on the Monday and carried on with the mission.

I saw the photos on FRE earlier this evening as well.  I went through Basic with the Cox'n back in '92.  He looks like he's had a hell of a week.

FRE is going to head back to sea in a few days.  I would imagine that the RCAF and MH community are going to be starting to think about how to get another helo over to that part of the world.  The ship is far less capable without an embarked helo.  I would imagine thought has been given to this already.

The flight data recorders were recovered and an aviation safety team awaits the ship when it docks in Italy. Sadly the ship also has recovered human remains that will need to be identified when they are returned to Canada. It seems that a lot of work by the crew was done for their shipmates. The recovery of the recorders will be helpful in uncovering the cause of the mishap.

Oh! I have slipped the surly bonds of Earth
And danced the skies on laughter-silvered wings;
Sunward I’ve climbed, and joined the tumbling mirth
of sun-split clouds, – and done a hundred things
You have not dreamed of – wheeled and soared and swung
High in the sunlit silence. Hov’ring there,
I’ve chased the shouting wind along, and flung
My eager craft through footless halls of air . . .

Up, up the long, delirious, burning blue
I’ve topped the wind-swept heights with easy grace
Where never lark nor even eagle flew –
And, while with silent lifting mind I’ve trod
The high untrespassed sanctity of space,
Put out my hand, and touched the face of God.

Abbigail's casket will arrive back in Nova Scotia on Monday, May 11, and shortly after 6pm there will be a procession down the Highway of Heroes led by military police and the Veterans UN NATO group "brigade of motorcycles". I encourage everyone who can to come to an overpass or roadside to salute her on her journey to her final place of rest. I'm sure it will mean the world to her family (father pictured with her below). We will leave the airport and proceed down the 102, following onto the 118 at Waverly. We will proceed over the McKay bridge, down Barrington to the dockyard before circling back down Barrington and over the bridge and proceeding to the Atlantic funeral home in Forest Hills. There are a few overpasses along the route.

The remains found during the search following the crash have been identified as Capt Brenden Macdonald...RIP.

On May 9, 2020, the Office of the Chief Coroner for Ontario identified the partial remains of Captain Brenden Ian MacDonald, one of the six military members killed in the Canadian Armed Forces (CAF) helicopter accident on April 29.

During the recovery efforts, partial remains were discovered and have now, through DNA testing, positively been identified. Captain Brenden Ian MacDonald, a Pilot, was originally from New Glasgow, Nova Scotia. Captain MacDonald’s family, and the families of the other crew members lost in the accident, have all been notified of this identification.

Sub-Lieutenant Abbigail Cowbrough was previously identified, and four other members are presumed dead, after the crash of a Royal Canadian Air Force (RCAF) CH-148 Cyclone helicopter.

The CAF are providing our members and their families with as much support as possible, including a wide range of resources to help them through this difficult time.

A RCAF Flight Safety team continues to investigate the circumstances of the accident while recovery efforts and search for additional remains will continue.

The CAF community expresses its deepest condolences to the families, friends, and colleagues of all our six members. We hope that they can find some comfort in knowing that we are all grieving with them.

Updated route for this evening for SLt Cowbrough's return.  French version and map of route available if you cycle thru the pictures.

Great gesture by the YYZ tower controller (around the 2:00 mark).

This Royal Canadian Air Force CC-150 Polaris departs Toronto for Halifax. Onboard were family members of the Armed Forces members lost in a CH-148 helicopter crash in the Ionian Sea, just off the coast of Greece. Earlier in the day they were at CFB Trenton for a repatriation ceremony which honoured all six members. When the controller sent them off to departure, he quoted Laurence Binyon's poem, "For The Fallen".
Click to expand...

My friend Jay is the local CMTT/etc WO...he had to brief all the families before the flight from Halifax.  We sat and talked about it a bit today then he went to smoke a cigar.  He had a tough weekend.

Dimsum said:
Great gesture by the YYZ tower controller (around the 2:00 mark). 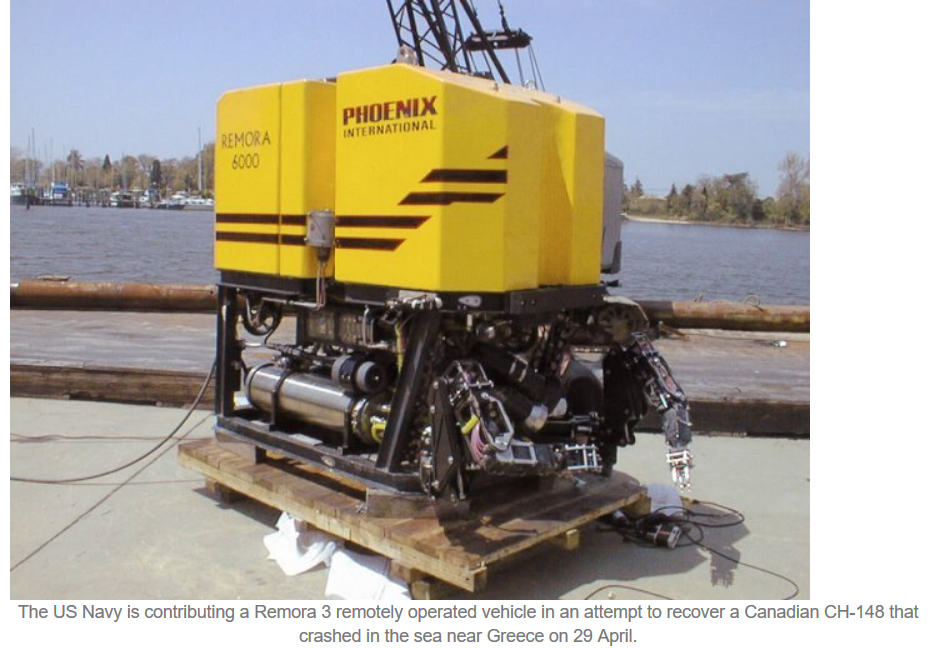 The Remora 3 is larger, heavier, and has more vehicle power than Remora 2. CAF spokesman Major Olivier Gallant said on 21 May that the USN is providing a Remora 3 for the recovery effort.

The Remora 3 will be used with a Flyaway deep-ocean salvage system to support the search and recovery operation. Integration of these two systems was expected to take place on 20 May.

The search site is in the Ionian Sea about 220 nm east of Sicily and roughly 3,000 m below sea level. The CAF said it had excellent positioning data on where the helicopter was potentially located. The underwater locator beacon, which enables it to zero in on the wreckage with a high degree of certainty, will also potentially assist with locating the aircraft or debris on the ocean floor, although the CAF said it would not know if the beacon was working until it arrived at the crash cite.

Dimsum said:
Great gesture by the YYZ tower controller (around the 2:00 mark).

No kidding - there aren't supposed to be any onions here.

The remains recovered have now been identified, we found them all. May they rest in peace

RIP to our fallen;  I am sincerely hopeful their families, friends and fellow Warriors can take some comfort being able to lay them to rest.

Very happy to hear our shipmates have identified and can be returned to their families to recieve closure and be laid to rest.

Chedabucto head will never have looked so good as it will on July 28th.

Greece (and others) vs Turkey over EEZs in Eastern Med. and natural gas drilling