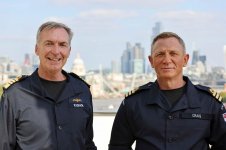 HOLLYWOOD actor Daniel Craig has been made an honorary Commander in the Royal Navy – matching the on-screen rank of James Bond.

Commander Craig’s appointment as an honorary officer reflects his personal support for UK military and links it with the legacy created through the guise of the fictional British secret agent.

As an honorary officer, the 53-year-old said he was eager to support serving personnel within the Senior Service.

He added: ‘I am truly privileged and honoured to be appointed the rank of Honorary Commander in the senior service.'

The announcement comes ahead of the premiere of the newest Bond instalment No Time to Die, which is set for nationwide release on September 30.

Filmmakers worked closely with the Royal Navy and Ministry of Defence in the production of the latest film in the franchise.

Portsmouth-based warship HMS Dragon features in the movie with a sneak preview of the distinct Type 45 destroyer, with her red dragon emblem on the hull, seen cutting through the waves in the latest trailer.

‘Our honorary officers act as ambassadors and advocates for the service, sharing their time and expertise to spread the message about what our global, modern, and ready Royal Navy is doing around the world.

Good2Golf said:
View attachment 66601James Bond actor Daniel Craig is made an honorary Commander by Royal Navy ahead of new film No Time To Die's release
Click to expand...