Afghan Interpreters, Others Fast-tracking to Canada

I'm actually surprised Qatar and UAE took that many people. Or is it just where they're processed, not final destination?
R

OldSolduer said:
I heard General Eyre on the radio - the fucking politicians let him and the CAF dangle in the wind. Where is the PM? Where is the MND? Oh I forgot its election time!!! (sarcasm intended), THE WORST GOVERNMENT I have ever seen in this country.
Click to expand...

Honestly I would rather hear from Eyre and some folks from GAC. They have a better grasp of what’s happening. The PM or the MND wouldn’t be adding much to the conversation I think. Every time they open their mouths it creates useless noise.

Where are the Japanese? Where are all the South Americans? South Africans?

OldSolduer said:
I heard General Eyre on the radio - the fucking politicians let him and the CAF dangle in the wind. Where is the PM? Where is the MND? Oh I forgot its election time!!! (sarcasm intended), THE WORST GOVERNMENT I have ever seen in this country.
Click to expand...

Is there any link to where General Eyre officially says the PM and politicians left him in the wind?

I thought they would have hand picked someone that likely won't cause them more trouble at this point after the fiasco with several previous CDS.

Czech_pivo said:
Where are the Japanese? ...
Click to expand...

Planes are standing by ...

dimsum said:
I'm actually surprised Qatar and UAE took that many people. Or is it just where they're processed, not final destination?
Click to expand...

The article says both countries "helped evacuate", so it sounds like throughput more than anything.

The latest Big Board from Reuters 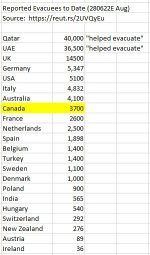 "Dozens of Afghan interpreters who worked for the British Army have been told they will not be allowed into the UK because they are a “danger to [national] security,” The Independent can reveal.

The men had been cleared for relocation here by the Ministry of Defence following years of service.

But as the Taliban began to capture large swathes of the country last month, they and their families received letters from the Home Office telling them they would not be allowed into the UK on the grounds they posed a risk.

No further explanation was given or right of appeal offered – leaving them trapped and fearing reprisals for their time helping western interests.

Now, lawyers representing one of the interpreters have taken the Home Office to court to demand it either reverse the decision or give a greater explanation for why the man is suddenly considered a danger.

In a special hearing at the High Court on Friday night, a judge ordered the government to provide those further details within 24 hours – something it is yet to do.

“These men were there for the British Army in Afghanistan,” said Rehana Popal, the specialist immigration barrister working on the case. “They did tours with the soldiers, helped them connect with local communities, did vital work.

“Now we are not only turning our back on them, we are saying, ‘actually you’re a threat to us’? It is horrible. How on earth is it possible the MOD can accept you and then at the 11th hour – at the most dangerous hour – the Home Office can come along and say no? It is deplorable. It does not make sense.” ...
Click to expand...

Oh my sweet fuck, really? That’s a fucking horrible thing to do, I can imagine there’s a few troops pissed at this decision,
Meanwhile, in the U.K. .

A brighter note the terp that served with my son’s platoon is safe in the USA. The troops are organizing to get him here to Canada

- Afghans volunteer to help British Army. In return, these individuals are offered special visas/clearance to relocate to the UK. (Sound familiar?)

- Interpreters are offered this opportunity for them and their immediate families because by working with the west in our campaign against the Taliban, they have made themselves and their families a target for the Taliban.

- Individuals are pre-cleared, meaning some form of security check had been conducted. Or, pre-clearance was granted in return for their help. They held up their end of the bargain, yet for some reason are STILL in Afghanistan. (Again, does this sound familiar?)

- The Taliban re-emerge in force as the west withdraws it’s final troops. The ANSF basically disappear (it now appears that was orchestrated inside the government at the most senior levels, before they jumped ship to safer places) - leaving nobody in Afghanistan to help the interpreters or protect them if need be.

- They are then told that they will not be relocated because they are a potential threat to national security, on the same day the UK has its final evacuation flight. (But the hundreds, or even thousands, of random Afghans who were taken out because they were ‘vulnerable’ are totally fine…)


That’s an ice cold stab in the back.

A blatant ‘F**k You, we aren’t honouring anything we promised & we aren’t worried because you might be dead soon, and even if you aren’t we don’t have a way to get you here even if a court orders us to let you in. Good luck chump.’

And they wonder why people do not trust the west......we stopped putting words into action for everyone's benefit along time ago

We are all committed to ensuring that our citizens, nationals and residents, employees, Afghans who have worked with us and those who are at risk can continue to travel freely to destinations outside Afghanistan. We have received assurances from the Taliban that all foreign nationals and any Afghan citizen with travel authorization from our countries will be allowed to proceed in a safe and orderly manner to points of departure and travel outside the country. We will continue issuing travel documentation to designated Afghans, and we have the clear expectation of and commitment from the Taliban that they can travel to our respective countries. We note the public statements of the Taliban confirming this understanding.
Click to expand...

That’s a nicely worded “fuck around…”, but I’m not convinced it comes with a “…and find out”.

Considering how this government has treated its own veterans, why would be surprised at the way they treat "foreigners", regardless of their service to our military. I expect the Afghans are simply asking for more than this government can afford. Excuse the disgust and cynicism.

brihard said:
That’s a nicely worded “fuck around…”, but I’m not convinced it comes with a “…and find out”.
Click to expand...

Wasn't the first "...and find out." delivered via drone a day or so ago? Daesh/IS-K/ ISIS plays a hardball game of tit-for-tat so this could escalate.
B

Haggis said:
Wasn't the first "...and find out." delivered via drone a day or so ago? Daesh/IS-K/ ISIS plays a hardball game of tit-for-tat so this could escalate.
Click to expand...

Of course. The people who failed to adequately secure their own citizens and foreign nationals at HKIA against an attack by the other people.

Haggis said:
Wasn't the first "...and find out." delivered via drone a day or so ago? Daesh/IS-K/ ISIS plays a hardball game of tit-for-tat so this could escalate.
Click to expand...

I'm betting that dude killed was a drone from Sector 7G.