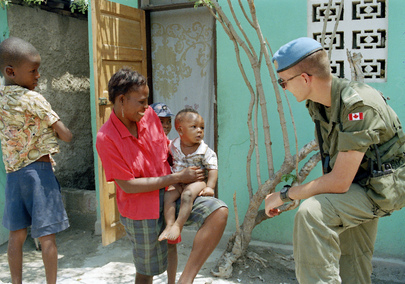 ... plus throwing a wee bit of money and lots and lots of warm words at climate change, seems to be the likely first "foundation stones" of a new Liberal foreign policy.
Click to expand...

And if we're going to go that route we will, likely, need more of this sort of thing, sooner rather than later, ...

... all of which might have a modest, short to medium term impact on this, giving the new government some breathing space to think (study, evaluate, consider) what it wants and needs for the defence of Canada and its vital interests around the world.

One thing that I agreed with the NDP election proposal was the White Paper. We are in DESPERATE need of one.

Defense spending has never been good under previous Liberal governments.so its back to the future I am afraid.
B

FSTO said:
One thing that I agreed with the NDP election proposal was the White Paper. We are in DESPERATE need of one.
Click to expand...

Completely concur, and I'd like to have National involvement in such an exercise (but I doubt either will occur).

Agree with your needs, ERC, with a couple of notes:
- need BHS in addition to JSS (actually, turn JSS into true AORs and make the BHS the flag); 2 X Canberra + 2 X Berlin would be my choice.
- need littoral maneuver escorts; maybe something like Absalons or UK Global Combat Ships.  Full VLS up to and including Tomahawk and Standard; all the same so no Destroyers... at least 12.
- not Growlers, but a credible NORAD fighter with possibly some strike capability (what Leslie said election night).  That might be F-35's, maybe some F-35's (including some STOVL?) and something else for NORAD, or maybe something like Superhornets / F-15SEs?
- a Joint Battle Management Aircraft to replace the Aurora (which makes it less capable for ASW, but c'est la vie).  Capable of Air, Maritime, and Air-Ground Battle Management.  Kinda of what Wedgetail could be...
- UAVs of all sizes: Polar Hawke, and swarms for the Joint Battle Management to control.

Don't think we are getting any of that... They won't cut too deep in my opinion, but it will be more of the same trundling along.  No vision will be executed in Canada until we are forced into it...

tomahawk6 said:
Defense spending has never been good under previous Liberal governments.so its back to the future I am afraid.
Click to expand...

It is all relative. Most of our major equipment was last bought by Trudeau the Elder. Our F-18s, Destroyer(s) (not sure I can use plural anymore as I think all but one has been decommissioned), Frigates (designed and approved, but not fully purchased at that point), and our Leopard 1s.

I know he wouldn't have wanted to spend that money, but he did as it needed to be done. In fact our defence spending has been in decline since Pearson (a Liberal), and if you look at the charts, Harper was spending the same amount as the previous Liberal Government by the end of 2013.

I am not saying I like either, just pointing out that it hasn't been all bad under the Liberals (though the last batch did leave a pretty bad taste in my mouth in regards to defence spending).

A few reference points to help guide the discussion ....

dapaterson said:
So, a few links and quotes about the Liberal Party's military commitments:

We will implement the recommendations made in the Canadian Forces’ Report on Transformation.

The Canadian Armed Forces’ ability to protect Canada’s borders and work with our allies overseas should never be compromised. Threats to its ability to meet future obligations must be addressed head on.

The Report on Transformation made a series of recommendations on how to build a more modern, efficient, and effective military, including reducing the size of administration within government and the Canadian Armed Forces in order to strengthen front-line operations.

Under Stephen Harper, investments in the Canadian Armed Forces have been erratic, promised increases in funding have been scaled back, and more than $10 billion of approved funding was left unspent.

This mismanagement has left Canada’s Armed Forces underfunded and ill-equipped, and the courageous members of the Forces unsupported after years of dedicated service.

We will not let Canada’s Armed Forces be shortchanged, and we will not lapse military spending from year to year. We will also reinvest in building a leaner, more agile, better-equipped military, including adequate support systems for military personnel and their families.

We will immediately begin an open and transparent review process of existing defence capabilities, with the goal of delivering a more effective, better-equipped military.

The Canada First Defence Strategy, launched by Stephen Harper in 2008, is underfunded and out of date. We will review current programs and capabilities, and lay out a realistic plan to strengthen Canada’s Armed Forces.

We will develop the Canadian Armed Forces into an agile, responsive, and well-equipped military force that can effectively defend Canada and North America; provide support during natural disasters, humanitarian support missions, and peace operations; and offer international deterrence and combat capability.

We will continue to work with the United States to defend North America under NORAD, and contribute to regional security within the North Atlantic Treaty Organization.

We will ensure that equipment is acquired faster, and with vigorous Parliamentary oversight.

We will put a renewed focus on surveillance and control of Canadian territory and approaches, particularly our Arctic regions, and will increase the size of the Canadian Rangers.

milnews.ca said:
Quick highlights (the words, before looking over the books in detail, anyway):

Like Baz I don't foresee any major cuts ~ not like under Prime Ministers Pierre Trudeau in the 1970s or Chrétien in the 1990s, but, nor do I see much prospect for growth.

I think (just hope?) there will be come increase in ships, if only for the job creation thingy. Keeping jobs in Davie and Irving might take some of the sting away from a possible, potentially even probable, cancellation of the F-35 (and maybe even pry some Quebec City area seats away from the Conservatives) and reward the people who helped give the LPC a sweep in Atlantic Canada.

Redirecting the RCAF away from combat operations in the Middle East may make the F-35 decision less "newsworthy."

Redirecting the Army (and RCAF) towards traditional, baby-blue beret style peacekeeping will pacify one part of the Liberal base and ease some spending pressures.

The Liberals need time, I think, to think about foreign and defence policies. A White Paper can be the sort of thinking exercise one wants, but it can also raise expectations and push the government into areas it might rather avoid.

Reorganizing DND, along the lines of LGen (Ret'd) Leslie's Transformation report, perhaps even being much more radical, might be another way to go ... think about the 1964 White Paper and the fallout therefrom.

One of his first decisions is to bail on the war against IS.Canada's 6 CF-18's are coming home.No more combat role for the CF.So no need to spend defense dollars on defense,lets spend it on Syrian refugee's or something. :
J

Those jackets and sleeping bags won't buy themselves.

I foresee the Davie product getting the full ahead green light, a delay and then cancellation of the Berlins, followed by Davie getting another contract to convert another ship.

Colin P said:
I foresee the Davie product getting the full ahead green light, a delay and then cancellation of the Berlins, followed by Davie getting another contract to convert another ship.
Click to expand...

The problem with the Davie project is that it only has a flight deck and not a hangar.
J

No, it has a hangar.  Have a look here:  http://projectresolve.ca/website/

Good point, I didn't think of that... especially in light of the reduced crew size too.  We had a bastard of a time getting shoring up to the flight deck to vertrep the GUNSTEN HALL, after she was badly damaged in heavy seas off NC.  I had forgotten about that.

jollyjacktar said:
Good point, I didn't think of that... especially in light of the reduced crew size too.
Click to expand...

Just get the entire Navy to work their overhead presses for a year, elevator and forklift no longer required!  ;D

tomahawk6 said:
Defense spending has never been good under previous Liberal governments.so its back to the future I am afraid.
Click to expand...

They have promised the exact same spending as the Conservatives.

jmt18325 said:
They have promised the exact same spending as the Conservatives.
Click to expand...

So not that great then.

Davie is in an area they will wish to cultivate and they can still leave WSS some of the other contracts while passing on the AOR Lite* contracts to them. JT promises and plans will be hitting the reality rocks fairly soon. I can imagine his eyes when he gets the intelligence briefing.