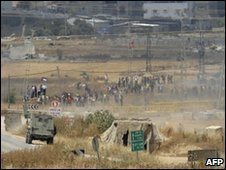 There are frequent clashes at the
Israeli border with Gaza

Israeli forces have shot dead two Palestinian gunmen who had
entered Israel from the Gaza Strip, the Israeli military said. The
incident occurred across the border from the southern Gaza Strip.
Hamas security officials confirmed that two men were sent on an
operation to attack Israel and clashed with soldiers near the
border, AP reports.

Separately, Israeli air force jets bombed parts of Gaza in pre-dawn
raids, but no-one was killed or injured. The Israeli army said the
raids were a response to the launching of a Qassam rocket earlier
this week. The rocket fell in the Ashkelon region, south of Tel Aviv,
without causing any damage, the army said.

Israel launched a devastating assault on the Hamas-run Gaza Strip
in December 2008, aimed at halting the sporadic rocket fire from
Palestinian militants in Gaza.

Some 1,400 Palestinians and 13 Israelis were killed in the 22-day war.
You must log in or register to reply here.