If you're thinking about visiting the aviation museum in Sidney, BC:

Not only was the B.C. man the last Canadian to win the Victoria Cross, but he was also among the last — some sources say he was the very last — Canadians killed in the Second World War.

Think how close he was to coming home. One more week — six lousy days — and the fighting was over anyway, the end hastened by an atomic bomb detonated the same morning Gray’s single-seat aircraft slammed into Japan’s Onagawa Bay. When the 27-year-old was shot down Aug. 9, 1945, his act of courage was a side note to the carnage at Nagasaki.

To make the story even sadder, word of the young pilot’s death didn’t reach his parents until after news of Japan’s surrender. “The timing was just tragic for them,” says Gray’s niece, Dr. Anne George. “They thought ‘the war is over and Hampton is coming home.’ ”

Their other son, Jack, had already died by then, killed in 1942 when his plane crashed in Britain while returning from a mission over Europe. That left only their daughter Phyllis, George’s mother. Imagine that.

George, her two daughters and three grandchildren will be on hand at 10:30 a.m. Sunday when a monument to Lieut. Robert Hampton Gray is dedicated at the B.C. Aviation Museum in North Saanich.

Nelson-raised Gray was a student at UBC (he worked with Pierre Berton on the university yearbook) when his plans to go to medical school were interrupted by the war. Joining the Royal Canadian Navy Volunteer Reserve in 1940, he was placed in the British navy’s Fleet Air Arm, and ended up flying Corsair fighters off the aircraft carrier HMS Formidable.

Gray dodged death in August 1944 when his rudder was shot off and his plane badly damaged during attacks aimed at ships and guns protecting the German battleship Tirpitz in a Norwegian fjord.

But he couldn’t escape the cannons and machine guns a year later while leading eight gull-winged Corsairs against a flotilla of Japanese warships anchored at Onagawa Bay. With his plane ablaze, he managed to fly in low and drop a 500-pound bomb on the destroyer Amakusa, sinking it, before crashing into the water. His posthumous Victoria Cross, the Commonwealth’s highest military honour, was in addition to a Distinguished Service Cross earned for raids on Japanese military targets the previous month.

The story is told in the new monument at the aviation museum by the airport. Paid for by Veterans Affairs, the Naval Association of Canada Endowment Fund and private donations, it recognizes not just Gray but the 260 Canadians in the Royal Navy’s air wing. The 46 of them who were killed are represented by 46 maple leaves applied to the back of the memorial. 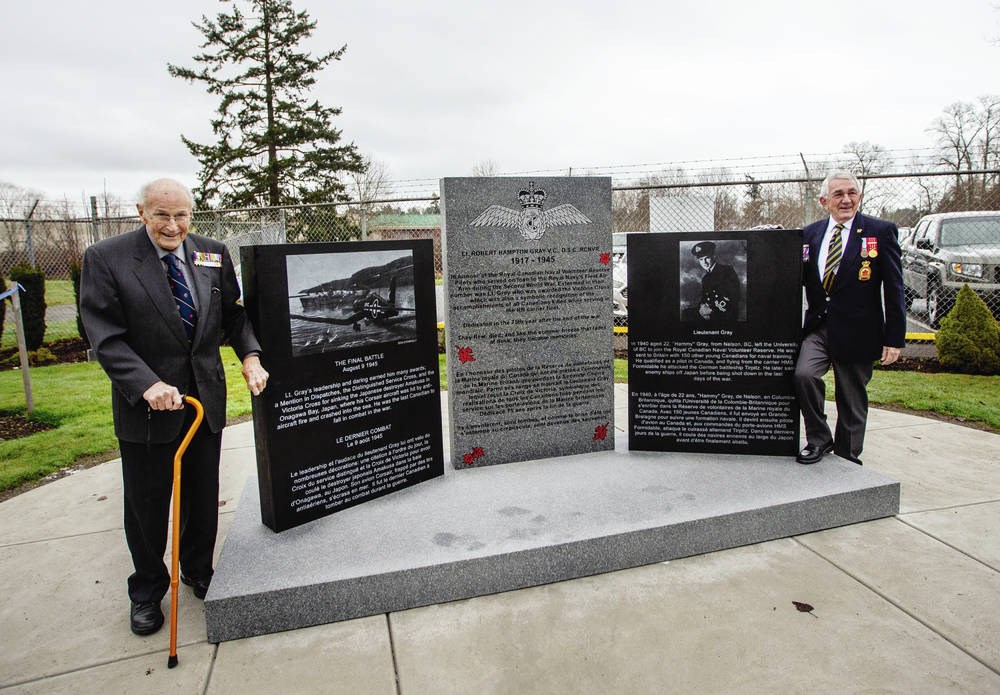 The death of Hammy Gray always seemed particularly sad. Not only was the B.C. man the last Canadian to win the Victoria Cross, but he was also among the last — some sources say he was the very last — Canadians killed in the Second World War.

J
Antis, the war dog that flew against the Luftwaffe