I'm pretty sure I have seen this topic before but I can't find it. Merge at will.


While a new naval future fleet architecture study from the Center for Strategic and Budgetary Assessments (CSBA) suggests that the U.S. Navy should maintain a fleet of 12 full-sized supercarriers, the paper also suggests that the service should develop a new class of light carriers. In the interim, while the new aircraft carriers are being developed, large deck amphibious assault ships could fill the role of the smaller flattops.

“The proposed fleet architecture adds to today’s CVNs smaller conventionally powered CVLs of 40,000 to 60,000 tons that would be incorporated into ARGs [amphibious ready groups] as part of the Deterrence Force,” the CSBA report states. “CVLs would provide power projection and sea control capabilities at the scale needed for day-to-day operations and for SUW, strike, and CAS as part of initial combat, freeing CVNs to focus on high-end integrated multi-carrier operations as part of the Maneuver Force or the Northern Europe Deterrence Force.”


The new conventional carriers would be roughly the same size as the World War II-vintage Midway-class—as they were configured toward the end of their service lives—and would carry a formidable air wing. Initially, the new carrier strike groups would be equipped the Lockheed Martin F-35B, but once the new CVLs are built and are operational, they would be able to embark more capable air wings.

“In the near-term, existing LHA/LHD amphibious assault ships would be employed as CVLs using a loadout of twenty to twenty-five F-35B aircraft. As they reach the end of their service life, LHA/LHD-derived CVLs would be replaced by purpose-built CVLs with a displacement similar to a Cold War-era Midway-class aircraft carrier and equipped with catapults and arresting gear,” the report states. “As a result, CVL air wings would be able to become slightly larger and incorporate airborne electronic attack (AEA) and airborne early warning (AEW) aircraft that are catapult-launched and require an arrested landing.”

The CVL air wing will evolve from today’s Marine air combat elements, if the Navy adopts CSBA’s plan. “CVL air wings will consist of about twenty F-35Bs, which can provide ISR, AEA, and targeting for the small-scale CAS, SUW, and strike attacks it will need to undertake as part of the Deterrence Force,” the report states. “This number of F-35Bs can be supported by the Marine Corps’ planned procurement of F-35Bs. It would impact the number available for shore-based operations under the Unit Deployment Program (UDP), but UDP operations could be supported by ARGs that are in the region, which would also increase the flexibility of the ARG ACE, since it would have multiple airfields ashore from which it could operate. For AEW and C2, LHA/LHD air wings will rely on shore-based maritime patrol aircraft and E-2Ds.”

Eventually, the CLV air wing will add its own organic electronic attack and airborne early warning. “As the Navy builds CVLs with catapults and arresting gear, the CVL air wing will evolve to add one to two UCAVs, one to two utility/tanker unmanned vehicles, one to two AEW aircraft, and AEA aircraft needed for the threat environment,” the report states. “This evolution will require Navy-Marine Corps air wing integration, as is done today in CVN CVWs.”

The U.S. Navy—which commissioned the CSBA report—seems to be embracing the idea. "The Navy is at an inflection point where we are back in competition.  Many of the ideas from these studies will help us win that competition,” chief of naval operations Adm. John Richardson said in an emailed statement.  “To win, our thinking must sharp and these studies help us - they give us exactly what we want...some fresh ideas. Each study provided ideas that in some cases validated and advanced the Navy's current thinking.  Some of the recommendations from the studies are so sound that we will act on them quickly.  Other ideas show promise and we'll study those hard.  The studies will be rolled into our program of analysis, war games, experiments, technology demonstrations, and prototyping."
Click to expand...

or even by LTA craft.

The other point is about replacing F35B capable ships with F35C ships with catapults as the older ships are decommissioned.  Why?  If the F3B solution is adequate why go to more complex ship solutions down the road?  I can't help but feel this is special pleading for the conventional community.

There are a lot of issues that need to be explored before saying definitively if smaller carriers would be better.

One issue which should be settled right away is that the F-35B is not a substitute for the F-35C, since the range of the B model is seriously compromised by the huge lift fan in the centre of the beast. In the A and C versions, this space is used for other things, including fuel, and when you are not in VTOL mode, the fan is simply dead weight for the plane and pilot. (In a different world, something evolved from the Harrier with vectored thrust would be in the place of the F-35B, but we don't live in that world).

The main issue is what sort of mission do carriers fulfill these days? Given the ever increasing range of AA/AD systems, small manned fighters or even UCAVs launching off a carrier deck might not be sufficient for force projection anymore. Once again, we might see a change in what sorts of things become the capital ships of the 21rst century. Will they be versatile attack submarines like the Virginia or Arrant, boats which displace 6-7000 tons and have the sort of performance of 1980 era Los Angeles attack subs but carry strategic weapons?  Will railgun equipped ships rain fire on inland targets 200+ kilometres inland while small carriers launch drones to do the targeting and observe BDA? Will careers simply launch swarms of disposable UCAVs to race towards incoming threats and protect the battlegroup (something like WWII era escort carriers protecting convoys in the North Atlantic)?

So while there are many good reasons to look critically at large carriers, to believe that "small" carriers are the answer is really situating the estimate. Small carriers may or may not have utility depending on what the navy is being asked to do. For our size Navy and our range of missions maybe a carrier like the Japanese Hyuga Class might be actually be worthwhile, but that is a question the Navy will need to ask and answer.

Something like the Mistral or the Aussie heli-carrier would be good for us, offers a lot of flexibility in the ways we can assist our allies, such a ship would useful for disaster relief, anti-piracy, Operations in coastal states to name a few missions.

Not that I'm an expert on the subject beyond my armchair, but given the vastly increased lethality and proliferation of various types of anti-ship technology (missiles etc), they'd be better off building lots and lots of, presumably cheaper,'light' carriers versus putting all their eggs into a few 'large up front' baskets.

It could be argued that the amphibious assault ship is a light carrier that as it can fly F-35's off its deck as well as other aircraft/helos.

The US should help out it's allies by funding part of these buys to ensure every NATO navy has one operational Helicopter/assault ship. The various aviation assets could be deployed to them as required.

Colin P said:
The US should help out it's allies by funding part of these buys to ensure every NATO navy has one operational Helicopter/assault ship. The various aviation assets could be deployed to them as required.
Click to expand...

Or rich, first world, NATO countries like us who have benefitted from hiding behind Uncle Sam's coat tails for decades, can finally get off our wallets and pay our own way (for a change).

Colin P said:
The US should help out it's allies by funding part of these buys to ensure every NATO navy has one operational Helicopter/assault ship. The various aviation assets could be deployed to them as required.
Click to expand...

Why spend money equipping a member of NATO when at the end of the day you have no control of the asset?

I echo D&B, if the NATO countries really wanted to have a top-end military they have the money to do it. They simply lack the political commitment to shift the funding. When you start subsidizing things there ends up being a huge shock when the subsidies end (see the Mexican citizens and gas prices) and suddenly a lot of people become really attached to their entitlements. It's a trap that I don't think the US wants to willingly fall into.

Might still be cheaper than building and manning the platforms themselves. More of a 1 time deal per ship and only for a certain type or perhaps for a portion of the equipment to make it more compatible.

I could see the US offering a discounted price to very close allies like Canada and Oz. At a cost of $3.4b its not an asset that just any Navy could use.

I was thinking more this https://en.wikipedia.org/wiki/Canberra-class_landing_helicopter_dock

Fine for littoral waters but not for much else.It cant accomodate the F-35.

The best, and most unsinkable, aircraft carriers have usually been friendly countries.

There's a role for some good ol' diplomacy here that we may be underestimating.

daftandbarmy said:
The best, and most unsinkable, aircraft carriers have usually been friendly countries.

There's a role for some good ol' diplomacy here that we may be underestimating.
Click to expand...

The beauty of the aircraft carriers (and navies in general) is that you don't need friendly countries, diplomatic clearances, boots on the ground, etc.
D

The downside is that modern asymmetric threats mean additional resources are required to protect the platform.  I recall a gentleman from New Zealand getting into a lot of hot water about a decade ago for trying to build a $5000 cruise missile (GPS guided).

dapaterson said:
The downside is that modern asymmetric threats mean additional resources are required to protect the platformairport.
Click to expand...

dapaterson said:
The downside is that modern asymmetric threats mean additional resources are required to protect the platform.  I recall a gentleman from New Zealand getting into a lot of hot water about a decade ago for trying to build a $5000 cruise missile (GPS guided).
Click to expand...

True.
But there is no panacea. I believe a carrier of some sort will survive due to the flexibility it brings to a government.

tomahawk6 said:
Fine for littoral waters but not for much else.It cant accomodate the F-35.
Click to expand...

Actually it is a version of this https://en.wikipedia.org/wiki/Spanish_ship_Juan_Carlos_I which was designed for the Harrier/F-35. The US could help cover the cost of the combat systems and making it compatible with the F-35, that way a squadron of F35B could use it as required. That offer may make the ship more fiscally attractive to US NATO allies, increasing the number of F-35 capable carriers at minimal costs. Not to mention the increased amphip and helicopter ability.

If you want a small carrier that is F-35 compatible, I would go for this instead of the hybrid "amphibious" warfare ships:

In a world of stealth would the radar experts consider this a stealthy aspect? 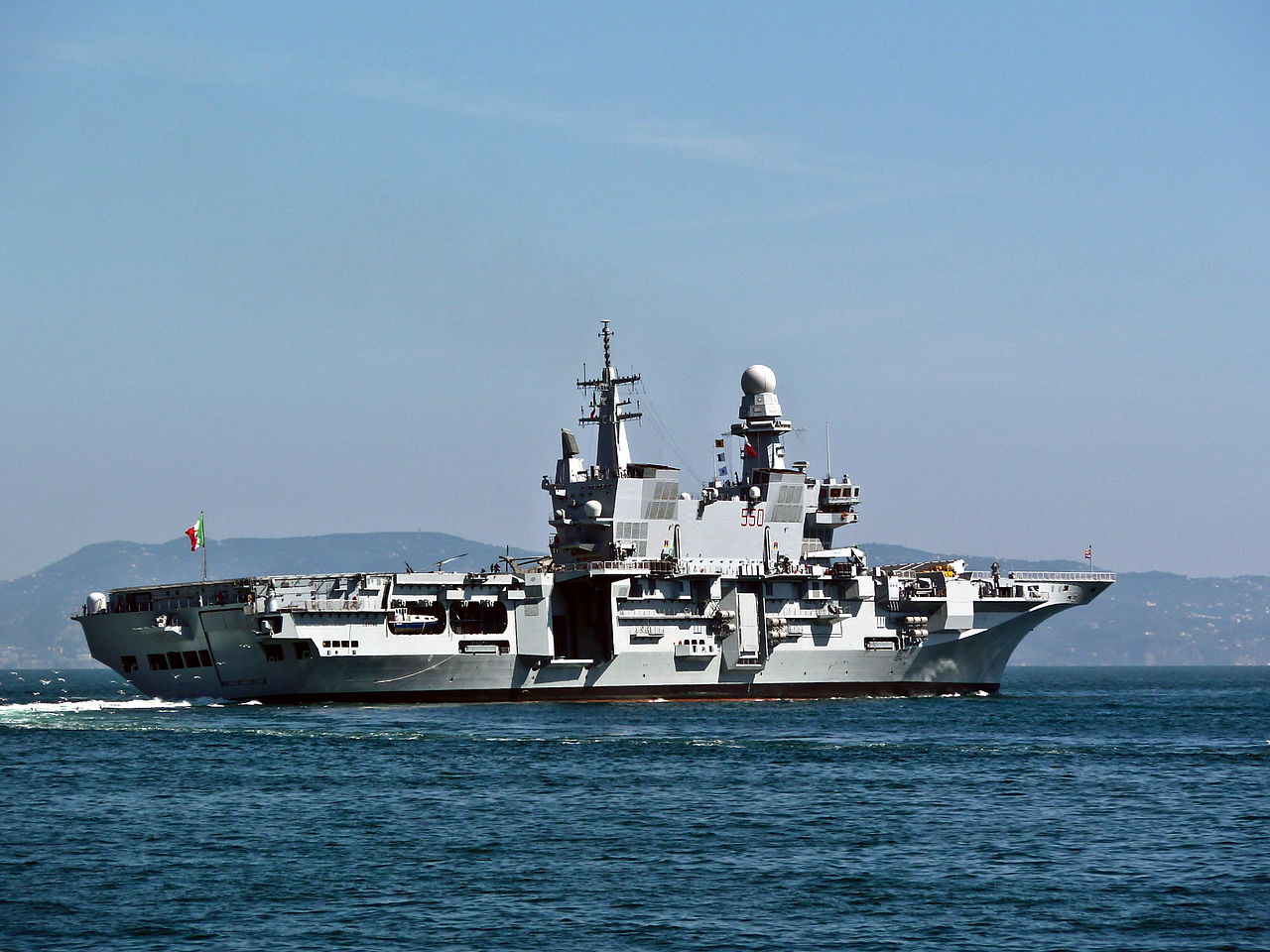