'The Increment'. So secret that, if we told you, you'd have to eat your own head... until the clerks' email:

Army clerks have exposed the identities of more than 100 Special Forces troops in a glaring security blunder.

Their names – and those of military units so secretive the Government does not acknowledge their existence – were shared by email.

Last night anxious commanders launched an investigation and ordered copies of the un-redacted document to be destroyed.

Forty members of highly sensitive intelligence and communication units were named as were 39 members of the Special Forces Support Group (SFSG) – a cohort of paratroopers and marines who operate alongside the SAS and SBS.

Alarmingly, the file also referred to E Squadron, considered the UK’s most secretive military intelligence unit, and named one of its operatives. E Squadron is a composite unit that brings together Special Forces troops and MI6 agents. It is based in Hereford, the home of the SAS.

Its troops are thought to have secretly flown into Syria last year to repatriate an unaccompanied British child from a refugee camp amid the fallout of the Islamic State conflict.

Foreign Secretary Dominic Raab confirmed the child’s return to the UK but deliberately did not mention E Squadron. Its 50 or so members are banned from using social media platforms such as Facebook in case terrorists target them or their families.

The Special Forces troops and their units were listed in the Army’s Corporal to Sergeant Promotion List, which was sent to hundreds of civil servants and soldiers regardless of their security clearance.

Documents containing such sensitive information are only supposed to be accessed by vetted individuals and on protected computer networks in a bid to prevent hacking.

A source said: ‘This should never have been sent out, or shared among non-vetted personnel, because it could all too easily fall into the wrong hands. The consequences could be fatal.’

Last night the Ministry of Defence confirmed that the final list of promotions would be redacted before being distributed. A spokesman said: ‘The leak of this information is being investigated and it would be inappropriate to comment further.’ 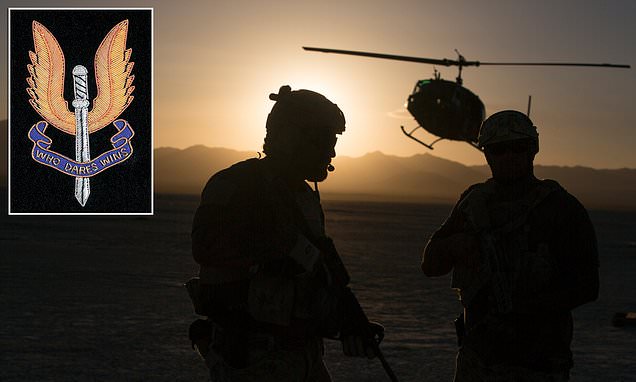 Probe launched as names of SAS troops are revealed

Someone's got some splainin to do...
You must log in or register to reply here.