I've heard though the grape vine that the C14 is leaving and that it is being replaced by Colt Canada's new C20 7.62mm Semi-Auto Sniper System. Anyone know why the choice was made to drop back to a 7.62mm from a .338 that the C14 is?

Google turned up this:

Multi-calibre is one of the requirements for the new sniper rifle that will replace the current C14, chambered for .338 rounds, and the 1970s-vintage C3 rifles, chambered for 7.62mm. “The .338 is a magnum round,” Gendron said. “By putting the 7.62mm barrel on the same frame as the .338, we can retain the scope and keep the same form, fit and function.” Final technical specifications for the new multi-calibre rifle have been completed and it should go to tender shortly. The winning bid will become the C21 MCSW (Multi-Caliber Sniper Weapon), which will be the cornerstone of the sniper system for years to come.

The goal is a semi-automatic with the same accuracy as a bolt-action rifle. This has led to collaboration with Colt Canada on the design of the C20 SASW (Semi-Automatic Sniper Weapon) that fires a new .338 match round. Tousignant said snipers with minimal time on the C20 had been hitting accurately at 800 metres – maybe not always with the first round but routinely with following shots. Gendron said the new round has enough energy to reach out to a kilometre. The C20 has passed all the acceptance tests and will go into production at Colt Canada once the contract is let by PSPC.

A semi-automatic enables snipers to engage targets in rapid succession. “Not every situation is going to require the sniper and his No. 2 giving him all the information and the ballistics corrections required to make a very long shot,” Gendron said. “Sometimes, within 1,000 metres, you want to have snipers attached to the infantry as overwatch and they will not have time to check their computers for an exact ballistic solution. It might be a target-rich environment and that’s where we can fire semi-auto with the accuracy of a typical sniper rifle.”
Click to expand...

From what I understand .308 sniper rifles were down loaded to a training role. Previously I heard rifle companies were getting them but that didn't appear to pan out.

"The goal is a semi-automatic with the same accuracy as a bolt-action rifle".
A semi will always have more moving parts than a bolt action so will always be inherently less accurate. Still a good goal to work towards I guess.

Also heard that for snipers the loss of accuracy in semi-autos is off set by the much improved rate of fire. With a 7.62x51 semi-auto DMR rifle the sniper won't have to carry an additional C8, saving some weight.

I've seen DMR positions are popping up in rifle companies once again.  Mike Tousignant really knows his stuff as well.

Did I misunderstand the article?

I understood it to be saying that the CAF was looking for a single semi-automatic weapon to replace both the bolt-action .338 C14 Timberwolf and the .308 C3 Parker-Hale.

Ideally they seem to be looking for a single frame that can support both the .338 and .308 rounds to reduce training and cross-over time.

One candidate they are working with is, apparently, the Colt Diemaco .308 C20 and considering how it might be upped to manage the .338 as well and turn it into a contender for a C21 Multi-Caliber Sniper Weapon, capable of firing both rounds.

That would put something like the Dragunov in the infantry's hands with the added benefit of being able to reach out to a target array similar to that of the Barrett .50

Perhaps that would increase the capabilities of the "rifles" and reduce the demand on the "snipers" and free them up for more recce associated tasks.

Better to design a manageable semi in .338 and then downgrade it to 7.62 NATO. Otherwise you have a gun that fails

Colin P said:
Better to design a manageable semi in .338 and then downgrade it to 7.62 NATO. Otherwise you have a gun that fails
Click to expand...

In the Falklands War the Argentinians used an M-14, with various scopes, to great effect. The guys I talked to who were pinned down/ shot (and survived) by them were impressed at how much damage/ delay that kind of weapon could cause.
C

Jarnhamar said:
Also heard that for snipers the loss of accuracy in semi-autos is off set by the much improved rate of fire. With a 7.62x51 semi-auto DMR rifle the sniper won't have to carry an additional C8, saving some weight.
Click to expand...

A semi-auto that was tested to an accuracy of 0.66 moa is going to be limited to accuracy of the ammo we feed it, not the inherent accuracy of the platform itself. There is negligible accuracy drop-off from switching to semi's, the real loss in ballistic performance is in velocity.

That's awesome. Which semiauto was that?
B

Jarnhamar said:
That's awesome. Which semiauto was that?
Click to expand...

Colt Canada C20. A 7,62x51 MRR/IUR platform. Colt Canada's page has some propaganda on it. https://www.coltcanada.com/c20.html

I believe Sako has a successful 308/338 multical platform. That's a bolt action though, this project sounds like they're aiming for a 338 semi auto. Making it semi-auto is really going to add to the size. Worth while having a 308 in a chassis designed for a 338 semiauto?

That's my worry is that the "Nifty factor" takes over from the practical factor. 338 is a significantly more powerful round than 7.62 NATO and you won't be doing barrel swaps. Designing it so the guns can take the same type of scope, bipod, fire controls mimic each other is pretty easy. Now a training gun that's exactly the same as the 338 but in 7.62NATO might be worthwhile just on ammo savings alone.

Designing a 'do it all' rifle is how you end up with the SPIW...a serial flechette rifle firing high speed bursts at 4000+fps mated with a 40mm multi-shot Grenade launcher.


Or the OICW...which we all know worked well.


There have been multi-caliber rifles designed and built, and maybe they'd work...but I think with the .338 round's energy, you'd be better off with two separate platforms.

Are these "companion pieces"?  Would .338 be a suitable calibre for a Platoon Weapons Det of MGs and DMRs?

I believe Sako has a successful 308/338 multical platform. That's a bolt action though, this project sounds like they're aiming for a 338 semi auto. Making it semi-auto is really going to add to the size. Worth while having a 308 in a chassis designed for a 338 semiauto?
Click to expand...

A bigger rifle might not solve all your longer range issues. I'd be happier if we just had more (regular sized) artillery

Some are already off the assembly line with final deliveries expected in early 2021: 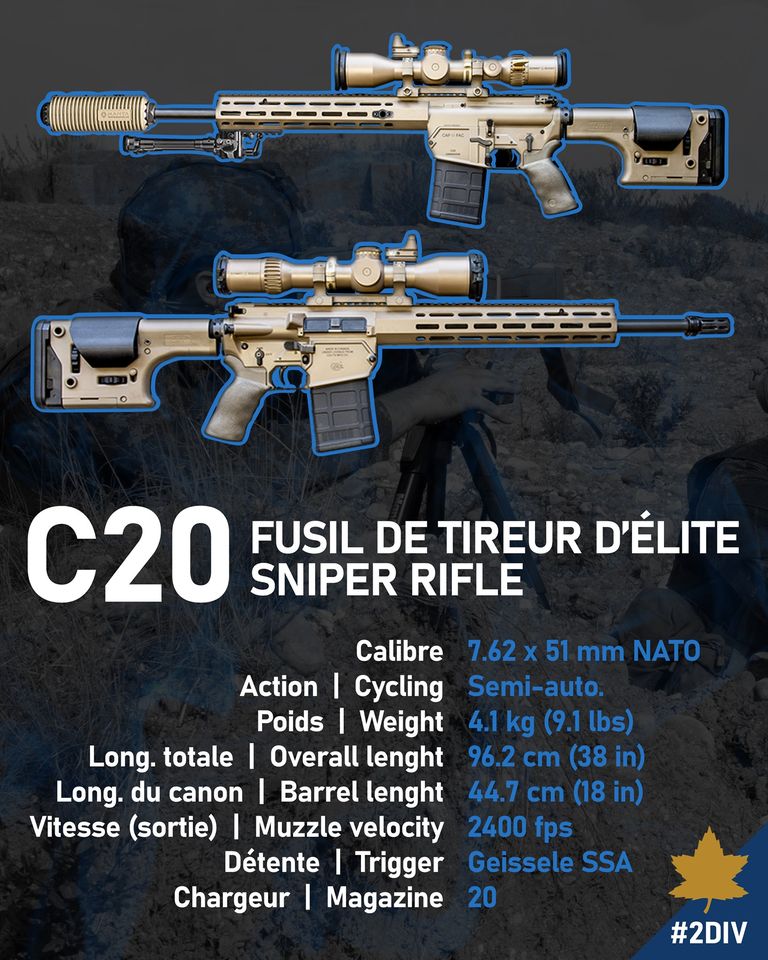 I am not overly familiar with the project but they probably came up with that figure by dividing the cost of the project by the number of rifles. There is more to a project than that, the cost would also include the accessories, training, spare parts, publications and other projects costs such as sending people to the range to test the weapons.
D

The project has delivered a variety of sniper equipment including rifles. As previously noted, accessories for the rifles, spares, ammo etc would be included, as would salaries of staff employed on the project, as would other items of equipment.  Per the web page of the project, they also acquired night vision equipment, optics, cameras, concealment and personal protective equipment.

Note that the page is seven years old, so there may well have been changes in approach and scheduling over the life of the project.  For example, there have been projects where requests went to industry and no one offered a solution that met the standard or was within the budget available; in other instances, equipment integration failed and Canada had to return for new tenders; in still other cases, as further definition work was conducted, it was discovered that there were better ways to sequence an acquisition.
You must log in or register to reply here.

The junior enlisted guide to doing nothing and looking busy

Digital government: how are we doing?