I have 3 x 1/32 model kits of the M24 Chaffee that I am planning to build. They are very old and i bought them in a garage sale on Sunday.

It's my understanding that the Canadian Army took on strength a few dozen of these tanks in the 1940's and retired them in the late 1950's. I am looking for some pictures of the Canadian tanks being used in the field, and of course paint schemes, unit markings etc. Google yield very few images that are specifically Canadian expect for a few tanks in museums.

I am also wondering what supply and logistics vehicles may have been used to keep these tanks in the field- specifically wreckers, fuel trucks, ammunition and other supplies.  My hope is to build a diorama of the three tanks in leaguer if I can source accurate support vehicles.

Was there anything specific or unusual about the Canadian versions of these light tanks or were they kept in factory standard equipment- specifically the secondary armament, radio boxes and antenna etc.

My further understanding is that these tanks were not used for much other than training, but also that one time at least of 4 them served with either the RCD or the FGH for some purpose. Pictures of those particular tanks would be of great interest.

Thanks and cheers!
L

With the post war agreement to buy surplus M4A2 76mm (W) HVSS Sherman’s, the deal added 90 M5A1 Stuart light tanks and 32 M24 Chaffee light tanks as well. These were all from US war stocks. In May 1945 the Canadian 4th Armoured Division received its first M24 Chaffee the trials. The Canadian Army’s verdict was that it was “impossible to speak too highly of its design and performance.”

The main part of the M24 Chaffee order started to arrive around December 1949. Royal Canadian Armoured Corps (RCAC) records shows five M24 tanks arrived in the first batch on that date, the rest started to arrive at Long Point depot in Montreal. In October 1952 there were two held in ordnance stocks, 17 at the RCAC School, one at the RCEME School and one assigned to Lord Strathcona’s Horse for a total of 21. For January 1954 there were 18 at ordnance depots, one at the RCAC School and two assigned to Active Force units. The M24 was declared obsolete by the Canadian Army in April 1958. (info – Anthony Sewards)"

I think they likely were scrapped once doctrine moved away from light tanks in the recce role and to scout cars in Armoured Regiments.  So school markings or LDSH, I doubt the RCEME marked the one they received; with paint anyway.

Let us know if you find any photos. I have a Bronco 35th Chaffee I'd like to do up in RCAC markings. I think there is a Chaffee at Borden, but I'm not sure of its pedigree.

Never realized we had Chaffees, surprised they didn't go to Korea.

...and one assigned to Lord Strathcona’s Horse for a total of 21.
Click to expand...

Sending 1 tank to a Regt; talk about an orphan fleet. I wonder what argument was used to send 1 of them there? Armed CO's runabout?

Pictures are hard to come by, here is one in British Service 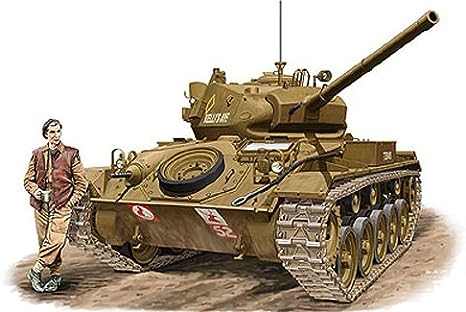 GINge! said:
Sending 1 tank to a Regt; talk about an orphan fleet. I wonder what argument was used to send 1 of them there? Armed CO's runabout?
Click to expand...

Likely they were future thinking commanders that were anticipating 2020 and the desire to penny packet a 100 MBT fleet across the CAF.*

* I know the numbers it is tongue in cheek answer

Some pics here from the War museum

The only Chaffee I know of are the two we got from the Yanks, in Germany, early 70's. We found a compound full of them at Graf (I think). Finagled with the Yanks and got two. The only hitch was we couldn't put them in operation. They had to be used as targets. In Hohne, we had to pay to shoot at other countries hard targets. We put the Chaffees and a written off Centurion on the range so we had our own hard targets.

Funny aside.
The centurion was attached to the ARV with a tow bar, and lined up with the other tanks. At night the echelon would come and refuel us. With the target inline with the rest, at night, it got filled also. 220 gallons of gasoline, not diesel. First round downrange the next morning hit it and brewed it up. It burned for a couple of days. The brass and the Germans were massively pissed. We thought it was the greatest show on earth.
You must log in or register to reply here.

An Army of Never-Ending Strength: Reinforcing the Canadians in NW Europe 44-45

Politics and Policies that affect private busines, the economy and impact on GDP
3 4 5