Is this an aircraft we should look at as part of a "wishlist":

During a flight test on Oct. 19, 2016, the CH-53K King Stallion helicopter achieved a 170 knot flight - with power to spare. Sikorsky has designed and built the CH-53K heavy lift helicopter to carry more than 27,000 pounds over a mission radius of 110 nautical miles. Learn more about the CH-53K helicopter: www.lockheedmartin.com/ch53k
Click to expand...

THE WORLD'S PREMIER HEAVY LIFT HELICOPTER IS IN FLIGHT TEST AT SIKORSKY
The CH-53K model is well on its way to becoming the world's premier heavy lift helicopter, leveraging the accumulated lessons learned over 50 years of manufacturing and operational success with its CH-53A, CH-53D/G, and CH-53E predecessors. Built to thrive in the modern battlefield, the extremely capable CH-53K aircraft is designed to be intelligent, reliable, low maintenance and survivable across the full spectrum of operating conditions. Expeditionary in nature, the CH-53K aircraft is designed to be fully shipboard compatible and capable of operating from austere and remote forward operating bases. The CH-53K helicopter is the Marine Corps' critical land and sea based logistics connector.
Click to expand...

Very nice machine.  Would have been a contender for MHLH, but the delivery time was significantly past the CH-147F.

Is this an aircraft we should look at as part of a "wishlist":
Click to expand...

We already have a brand new platform that does this.

Infanteer said:
We already have a brand new platform that does this.
Click to expand...

Yes.  These machines are meant for mega-VERTREP and sea-based A1 replen to the beachhead after the assault. :nod:

I think you need to go Russian after this. There is big and then there is Russian big! 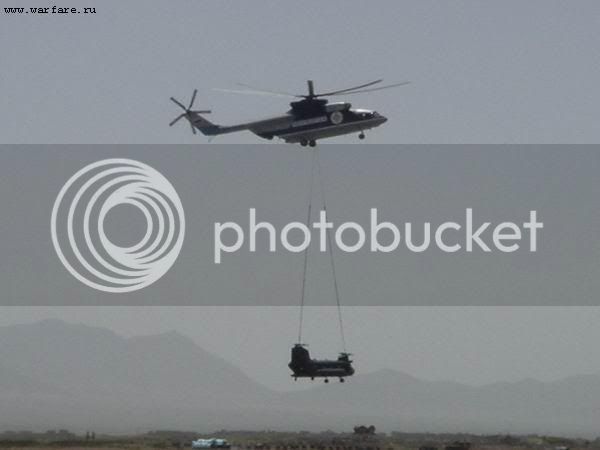 The aircraft, which replaces the CH-53E, provides about three times the external lift capability, greater ranges and better reliability for the Marine Corps, in support of the service hauling heavier equipment at greater standoff distances from ship to shore.

“The team has worked really hard to ensure we could get here, to Milestone C, and to begin low-rate initial production,” Deputy Commandant for Aviation Lt. Gen. Jon Davis said in a statement.
“I’m very proud of all of them, and I’m looking forward to getting the most powerful heavy-lift helicopter ever designed into the hands of our Marines.”

Ahead of that Milestone C acquisition decision, program manager Col. Henry Vanderborght told reporters at the Navy League’s annual Sea-Air-Space exposition that “there are so many improvements that have been made to this aircraft” to boost lift capability, safety, reliability and maintainability.

“This capability right here is really going to be an incredible step increase for the warfighter and the [Marine Air-Ground Task Force],” he said.
“Basically 3X the lift capability in the same ambient conditions as the legacy aircraft, meaning the K will be able to lift three times more than the 53E in that 110 nautical mile environment, 103 degrees Fahrenheit at sea level with [a landing zone] of 3,000 (feet) … above sea level, with 91.5 Fahrenheit at that LZ. That’s basically our key performance parameter.”

Beyond the sheer numbers, Vanderborght said automation, both in the control modes and in tracking and predicting maintenance needs, will make the aircraft safer and easier to operate.

“Basically the 53K will be able to fly to an LZ pretty much hands off and pick up a hover in total brownout conditions – and that’s one of the areas where we’ve lost a lot of aircraft, a lot of Es,” he said.
“So from a safety standpoint, survivability, it’s just incredibly more capable than what we have today, and the Marines pretty much can’t wait to get it.”

He said the new aircraft would cost about the same as its predecessor in operations and sustainment costs, but for that money the Marines would get a much higher sortie generation rate.

A Fleet Common Operating Environment (FCOE), which has been running for years on the CH-53E, collects aircraft maintenance data and ultimately may help the Marines get to a condition-based maintenance environment.

For example, he said, the main rotor gear box on the legacy CH-53E used to be overhauled every 2,000 hours, but a study with FCOE data proved maintainers could overhaul it at 2,400 hours instead.

“What that equates to is five less main rotor gear boxes that we’ve got to pull every year at a savings of about $4.7 million,” the program manager said.
“That’s just one example, there are many others.”

Michael Torok, Sikorsky’s vice president of CH-53K programs, said at the same media briefing that “the amount and magnitude of sensors that are on the aircraft,” plus the computing power in FCOE, “really allows the maintainers, when the aircraft comes back in, to debrief, you stick the [cards] into the laptops and all of that diagnostics on the ground station basically will really focus in on any maintenance that is required. So false removals go down, false alarms go down. Really focuses and reduces mean time to repair. So that automation, that technology is really going to play a significant role” in keeping operations and sustainment costs down.

Torok said the first four CH-53Ks have been “mapping out the rest of the edge of the envelop” for how the aircraft can operate beyond its basic requirement of 27,000 pounds for 110 nautical miles. Additionally, aircraft 5 and 6 are already under contract, and Sikorsky is buying long-lead materials for the first Low-Rate Initial Production contract of two aircraft. Sikorsky’s production line, which will consolidate to their Connecticut facility, will eventually build 24 aircraft a year and reach full-rate production in 2020.

The Marine Corps will be able to move more Marines, more rapidly from a ship to join the fight in a war zone. With the new helicopter, Marines will also be also to evacuate more casualties to medical aid more quickly in CASEVAC. It could play a key role in quickly transporting more resupply to Marines at remote, hard-to-reach, operating bases.

The goal is to provide the Marines with the best heavy lift helo in the world. Ultimately, the Marine Corps plans to have eight active duty squadrons, one training squadron, and one reserve squadron.

It is not just super-strong, the Marines’ cutting-edge new helicopter is incredibly advanced in other ways too. In fact, it is so “smart” it can nearly fly itself.

Marines will also be able to leverage the advances in the King Stallion for search and rescue in combat and for other missions like supporting special operations.

It will also be very useful for humanitarian missions. For example, it could transport three times as much food to an area ravaged by a natural disaster that has lost access to local food supplies.

What can it do?

The new helicopter can carry 27,000 pounds as an external load and it can do this over 110 nautical miles. It will certainly bring powerful lift to war zones.

In fact, the King Stallion has a very versatile external hook system. Marines will be able to opt for a single, dual or triple hook so it can carry up to three independent loads at a time.

The new helo will have a cruise speed of 141 knots with a range of about 530 miles.

The CH-53K King Stallion has a larger cabin – it is wider by a foot than the CH-53E Super Stallion. This is important because it means the helicopter will be able to carry High-Mobility Multipurpose Wheeled Vehicles (HMMWVs). Cargo will be much easier to load and unload – and without having to remove troop seating.

There’s a new very modern glass cockpit and a stronger composite airframe that will reduce weight and vibration. It will also be powered by powerful new engines.

King Stallion has many safety features built in to enhance the safety of Marine Corps personnel.

There are advances to help free up the crew so they can focus on the mission.  New mission management and full authority fly-by-wire flight controls, for example, are two of these exciting advances.

Degraded Visual Environments (DVE) continue to be a dangerous threat in war zones.  This encompasses scenarios such as sand and dirt filling the air as a helicopter draws close the ground, making it difficult to see. But King Stallion incorporates several new features like precision hold to help pilots cope with this serious challenge.

The CH-53K King Stallion recently completed the first flight to Naval Air Station Patuxent River, Maryland travelling six hours over 810 miles without a hitch- this successful transition is the latest key step closer to getting the helicopters into the air with the Marines.

When will King Stallions join the Marines?

The Department of Defense currently plans to provide the Marine Corps with 200 of these powerful new helicopters. The first six are scheduled to reach the Marines next year.


Allison Barrie is a defense specialist with experience in more than 70 countries who consults at the highest levels of defense and national security, a lawyer with four postgraduate degrees, and author of the definitive guide, Future Weapons: Access Granted, on sale in 30 countries.  Barrie hosts the new hit podcast “Tactical Talk” https://itunes.apple.com/us/podcast/tactical-talk-with-allison-barrie/id1175491261?mt=2 where she gives listeners direct access to the most fascinating Special Operations warriors each week.

Kilo is an impressive machine.  It is especially impressive in person.  I've walked an Mi-26 Halo, which is just insanely huge, but the King Stallion seems right up there.  Last I heard from the Avn PMO was IOC 2019 and all deliveries by 2021.

Israel is kicking the tires, their Stallions are older.  I don’t believe they operate Chinooks, and maybe the Osprey is a little too much for their needs.
I know they have a couple of Stallions that are dedicated medieval.

whiskey601 said:
Israel is kicking the tires, their Stallions are older.  I don’t believe they operate Chinooks, and maybe the Osprey is a little too much for their needs.
I know they have a couple of Stallions that are dedicated medieval.
Click to expand...

As cool (capable) as the new Chinooks are, I think the Israelis have a soft spot for the '53.  Wouldn't be the least surprised if they get the -53 instead of the -47.

That should have read "medical" ...

From the article, it appears the IDF is impressed the newly upgraded US F models.

From the article, it appears the IDF is impressed the newly upgraded US Canadian "F" models.
Click to expand...

We flew in them a lot during NATO exercises in the 80s. They were excellent.

My boss at the time made a joke that the poor 'murricans couldn't understand. He was pretending to be p*ssed off because 'your giant bloody helicopter just ate my rifle company!'

If you get the money,buy more Chinook's.
You must log in or register to reply here.