Good2Golf said:
Ladies and gentlemen, I present to you today’s winner of the Internet.

Cue Irving pairing up with IMP aerospace in Halifax and with Bell-Textron to start a production line of Scorpion jets.

The wrong airplane completely, but it'd be a made in Canada solution with domestic production offsets, and would be a huge sop to the east coast who voted all red....

Y'all to cynical. The Defence of Canada and it's citizens is too important to be determined by politics of the LPC. Think of all the women who could be endangered. The PM is a feminist; he wouldn't do that.

Thucydides said:
President Trump has been a public personality for decades and he still seems completely clueless as to where he's coming from.
Click to expand...

There. Fixed that for you.  :trainwreck:
G

I give you the CF5 of the 21st century only less useful the the CF was . :RstTrky:

NavyShooter said:
Cue Irving pairing up with IMP aerospace in Halifax and with Bell-Textron to start a production line of Scorpion jets.

The wrong airplane completely, but it'd be a made in Canada solution with domestic production offsets, and would be a huge sop to the east coast who voted all red....
Click to expand...

I was having a discussion with my friend at MTU, based on that I expect the USAF to have a high un-serviceable rate for aircraft that use commercial engines as the new US based provider is not up to speed. Now I am reading that LockHeed is struggling to provide enough spare parts for the current F-35 fleet and for construction. Since it's not easy to switch suppliers of these types of parts, I suspect that even if Canada choose a non-F35 fighter that Lockheed could not afford for quite some time to make good it's threat of cancelling Canadian based contracts related to the aircraft.

Unconfirmed report from CNBC that Canada is planning on buying used Australian F-18s.

Canada is scrapping a plan to buy 18 new Boeing Super Hornet fighter jets amid a deepening dispute with the U.S. aerospace company, three sources say three sources familiar with the matter said on Tuesday. The Liberal government will announce next week it intends to buy a used fleet of older Australia F-18 jets, the same kind of plane Canada currently operates, said the sources, who asked not to be identified because of the sensitivity of the situation.
Click to expand...

Are we going to buy second hand pilots and techs from Australia to operate them also?
:facepalm:

Canada is scrapping a plan to buy 18 Boeing Co (BA.N) Super Hornet fighter jets amid a deepening dispute with the U.S. aerospace company, three sources familiar with the matter said on Tuesday [Dec. 5].

Instead, the Liberal government will announce next week it intends to acquire a used fleet of older Australia F-18 jets, the same kind of plane Canada currently operates, said the sources, who asked not to be identified because of the sensitivity of the situation.

The move underlines Ottawa’s anger at a decision by Boeing to launch a trade challenge against Canadian planemaker Bombardier Inc (BBDb.TO), which the U.S. giant accuses of dumping airliners on the domestic American market.

It also casts into question the future of Boeing’s military sales in Canada. Boeing says its commercial and defense operations in Canada support more than 17,000 Canadian jobs.

Canada and Mexico are currently locked into increasingly acrimonious negotiations with the United States over the NAFTA trade pact, which President Donald Trump says has not done enough to protect U.S. jobs.

The Liberal Party of Prime Minister Justin Trudeau initially said in late 2016 it wanted the Boeing jets as a stopgap measure until it could launch a competition for a permanent fleet to replace Canada’s ageing CF-18 jets.

But as relations with Boeing deteriorated, Ottawa slammed the firm for not acting as a trusted partner and began looking at the Australian jets.

Two of the sources said Australian military officials had been in Ottawa late last month for talks.

One source said that by buying the Australian fleet, Canada would save money as well as avoid the need to train its pilots on a new aircraft or spend money on a new supply chain.

Officials had previously said that if the purchase went ahead, some of the Australian aircraft would be used for spare parts.

The offices of Public Works Minister Carla Qualtrough and Defence Minister Harjit Sajjan, who share responsibility for military procurement, both declined to comment.

Canada is due to officially announce the requirements for its new fighter fleet in early 2019, kicking off an open competition.

One potential contender is Lockheed Martin Corp’s (LMT.N) F-35 fighter, which Trudeau initially said he would not buy because it was too expensive. The government has since softened its line, saying the plane would be allowed to compete.

Additional reporting by Leah Schnurr in Ottawa and Allison Lampert in Montreal...
https://www.reuters.com/article/us-canada-boeing-fighterjets/canada-scraps-plan-to-buy-boeing-fighters-amid-trade-dispute-sources-idUSKBN1DZ2W2
Click to expand...

Oldgateboatdriver said:
Are we going to buy second hand pilots and techs from Australia to operate them also?
:facepalm:
Click to expand... 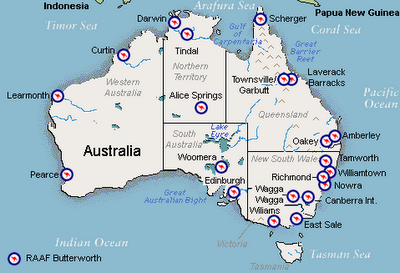 Does RAAF Butterworth have free pancakes?

And what happens when the US congress refuses to permit the sale of the Aussie F-18s to Canada?

This just gets dumber and dumber.

It's in Penang, Malaysia.  Food is amazing (been to Penang, not Butterworth).

The map is a little misleading.  Learmonth, Scherger and Curtin are bare bases, like our FOLs in the north.  Woomera is a testing range.  The map also makes it seem like the bases are close to each other, when in reality there is 600km between Edinburgh (north of Adelaide) and Woomera.  Tindal (the RAAF fighter base in the north) and Darwin is about 300km, so not that far removed from Cold Lake to Edmonton.

Don't inject that kind of fore thought and intellect into this knee jerk reaction.

Roll on the next election so we can get rid of Trudeau and the rest of the idiots.

BTW Butterworth ceased to be a RAAF base quite some years years ago, although dets still swing through, and whatnot. Very little RAAF kit and kaboodle there, and most of the few pers around are HVA folks. Won't be used for F-35 dets. Oh yeah, Dimsum is 100 per cent correct re the food (and beer) in Penang - it just can't be beat.  8)

Tindal proves that a fellow doesn't have to die to get to hell........


+++ The Australian angle continues to gain momentum, with Canadian officials reportedly visiting RAAF Williamtown in August to inspect the RAAF aircraft, and Australian officials visiting Ottawa in November for further discussions. But with the RAAF’s first F-35 squadron unlikely to achieve initial operational capability at Williamtown before 2020 and subsequent squadrons at one-year intervals through to 2023, the availability of RAAF classic Hornets in significant numbers before 2021 is uncertain.

If bought by Canada, the former RAAF aircraft would be absorbed into the Canadian fleet quite easily – either as a source of spares or to spread the budgeted flying hours over a larger fleet – as both fleets completed similar upgrade programs in the past decade resulting in common sensor and avionics capabilities which are still operationally relevant. But with both countries’ Hornet airframes built in the 1980s, the youngest airframe available will be nearly 35 years old by the time any transfer of RAAF Hornets to Canada could occur. Canada once operated a fleet of 138 CF-18s, but through attrition and force downsizing, now operates fewer than 80 aircraft.

The Reuters report claims that by buying ex-RAAF Hornets, Canada would save money by avoiding the need to absorb a new training and sustainment system. But any savings will likely be offset to a large degree by the maintenance burden of operating 30+ year old airframes. Further, while the RAAF jets may extend the operational life of the Canadian fleet, the need to replace these aircraft within a decade still remains. +++

Yes but it moves the decision point into another election cycle, therefore no longer the problem for this current government.

This is unconscionable--and by 2026 construction of absurdly costly new RCN CSCs supposed to be well under way--where will money come from for new fighters?

Industry sources say the Trudeau government is preparing to push back the expected delivery date of a new fighter jet to replace Canada's aging CF-18 fleet.

The Liberals said last year that they planned to start receiving new fighters in about five years, or around 2021, at which point the 30-year-old CF-18s would start being phased out.

But several sources tell The Canadian Press that defence officials don't expect the first new plane to be delivered for another eight years, which would put the time frame around 2026.

The sources, speaking on condition of anonymity because of the sensitivity of the issue, would not speculate on why the delivery schedule was being changed.

But the decision could have major financial implications if it means having to sink even more money into the CF-18s than the hundreds of millions already set aside to keep them flying into the next decade [and for used RAAF Hornets too!--emphasis added].

Some are also wondering whether the Liberals, who had promised to launch a formal fighter-jet competition before the 2019 election, now plan to hold off until after Canadians go to the polls.

News of the expected delay comes as the government is moving ahead on the purchase of used fighter jets from Australia instead of brand-new Super Hornets from Boeing to temporarily bolster Canada's CF-18 fleet.

...the used jets are 30 years old -- the same vintage as the CF-18s -- and will need significant upgrades to continue flying into the next decade...
http://www.ctvnews.ca/politics/feds-planning-to-push-back-delivery-date-for-new-fighter-jets-sources-1.3709684
Click to expand...

Utter lunacy stemming from political cowardice and almost utter disregard for the military.

My apologies if this was covered already but how would the additional Australian Aircraft be deployed?

Are they adding a new squadron?

Or adding airframes to existing squadrons?


Thanks in advance, Matthew.
You must log in or register to reply here.