The Return of the Urban Firestorm

Ft McMurray and Williams Lake both missed this fate by just a hair's breadth. Lillooet, not so much....


The Return of the Urban Firestorm
What happened in Colorado was something much scarier than a wildfire.

On Thursday afternoon, in the space of a few hours just a day before the new year, 100-plus-mph winds carried the most destructive fire in Colorado history through the suburban sprawl of greater Denver, destroying much of the towns of Louisville and Superior and forcing tens of thousands to flee, including many who had entered shopping malls from sunny skies just a few minutes before. As many as 1,000 homes were destroyed. Two people currently remain missing; if the death count stays at zero, Colorado governor Jared Polis said Friday, it would be “a New Year’s miracle.”

By the standards of the megafires and gigafires of the last few years, the Marshall Fire was quite small — 6,000 acres, all told, once it was finally, poetically, brought to an end by snowfall on New Year’s Eve. But following the driest and second-warmest fall in 150 years, the devastation was harrowing out of proportion to its scale, since, unlike most wildfire, it was not in wildland or forest but was — as the climate scientist Daniel Swain, who lives in Boulder, put it — an “urban firestorm.”

That may sound like hyperbole, but on Friday the governor echoed the language: “It wasn’t a wildfire in the forest, it was a suburban and urban fire. The Costco we all shop at, the Target we buy our kids’ clothes at — all damaged.” In fact, though the fire did not begin there, it quickly jumped to a strip of big-box stores and their parking lots — to most Americans perhaps the very picture of an inflammable Anthropocene.* But as Swain told me on Friday when we spoke by phone, “Fire finds a way.” The way, typically, is wind; during the Marshall Fire, it carried flames and embers at hurricane-force speed for eight straight hours, consuming “football-field lengths of land in seconds.”

I wanted to start with what feels different about this fire. For a lot of Americans, the Camp Fire in Paradise, California, in 2018 may be the most horrifying recent memory — 18,000 structures burned, 85 deaths. But while Paradise was a relatively dense community, it was in what’s called the “wildland-urban interface” — essentially, houses in the woods. What we saw Thursday was so different — subdivisions, tract homes, fire just tearing through suburban environments we’ve been taught to think of as safe in every way.

There are lots of people calling this a Colorado forest fire. It was absolutely not a forest fire, by any stretch of the imagination. It arguably started as a wildfire, mainly as a brush and grass fire, with some woodland near the point of origin. But it was a wildfire that became an urban conflagration pretty quickly — just a matter of hours into the event. And that sets it apart in a lot of ways from some of the Western megafires we’ve been talking about in recent years, that burned hundred of thousands of acres, and sometimes burn hundreds or even thousands of homes, but they do so over a longer period of time.

On Twitter you called this fire in Colorado an “urban firestorm.”
This was something that we didn’t really have to think about for most of the 20th century, in relatively wealthy nations, with well-developed modern firefighting. Really the only major 20th-century urban fires in hose settings that occurred were the intentional ones during World War II, the fire bombings of Dresden and Japan. We just didn’t really have to think about that much, especially happening accidentally, in the latter half of the 20th century.

But now we’re seeing it again in the early part of the 21st century. And it’s due to a constellation of factors. Part of it is how that wildland-urban interface has greatly expanded, in some cases pretty recklessly — not only has it expanded, but it’s expanded in ways that make a lot of these structures in these neighborhoods quite vulnerable. It’s also because of climate.

Right, of course. All 20 of the largest wildfires in recorded Colorado history have taken place in the last 20 years.
But the fact that a fire can essentially become self-sustaining outside the wildland, in an urban environment — it’s a reemergence of an old problem. In centuries past, whole cities would burn down due to urban fires. You know, the Great Chicago Fire …

There’s actually a lot of cities in history — in some cases, they burned more than once.

But the reemergence of this phenomenon suggests two things. One, it suggests that the risks of the physical hazard of fire is increasing, which we know it is, for a range of reasons, including climate change and the historic policies of fire suppression and the lack of prescribed fire. But it’s also because we’ve sort of lost a lot of the knowledge and behavioral lessons of how to deal with fire in urban areas.

To avoid starting a new thread, putting this here, but can't imagine having to worry about 80 year old bombs on top of fighting a forest fire... 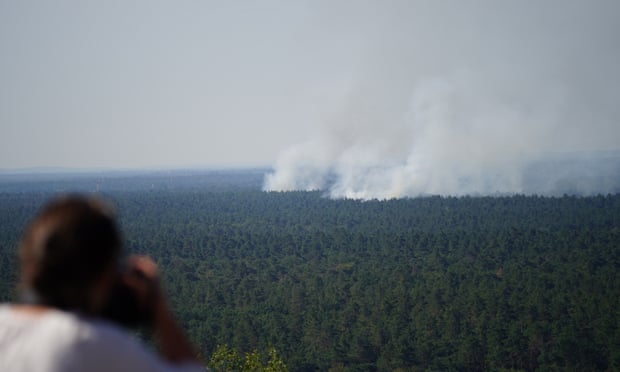 Smoke rises during a forest fire in the Grunewald district of Berlin. Photograph: Clemens Bilan/EPA


Repeated explosions have prevented firefighters in Berlin from reaching a blaze in a forest to the south-west of the city that started at a police munitions site used to store second world war bombs.
The fire broke out in the early hours of Thursday morning after unexploded ordinance was accidentally detonated, according to the Berlin police.

The forest, in the well-to-do Grunewald district of the German capital, is popular with city dwellers, from swimmers to dog walkers.
The fire took hold in an area about 1.5 hectares (3.7 acres) in size. Approximately 100 firefighters are at the site, but were unable to get within 1,000 metres to the flames because of a series of explosions triggered by the heat.
The Berlin fire brigade said drought-like conditions had already made the forest susceptible to fire. An unprecedented number of forest fires elsewhere across Germany also means there is a shortage of fire-fighting helicopters to tackle the blaze.
The police site is used to store unexploded ordnance, ranging from confiscated illegal fireworks to second world war munitions that are regularly discovered at building sites across the city.
Controlled explosions are periodically carried out by experts at the site to safely dispose of stock but no detonations have taken place since June because of the dry conditions, resulting in more explosives being stored there than is usual. 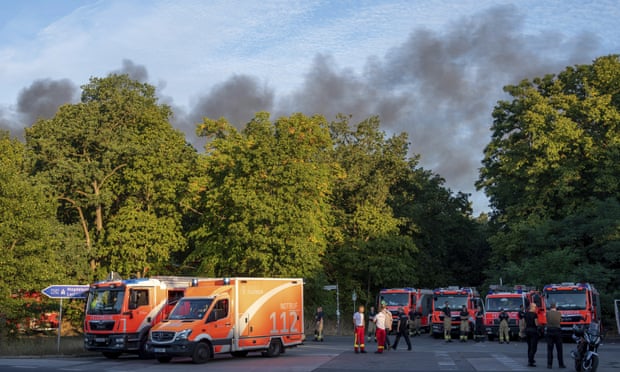 Fire engines and ambulances on standby at the Grunewald forest in Berlin. Photograph: Christophe Gateau/AP
The fire also closed a stretch of the overground S-Bahn railway, bringing disruption to public transport across the city and disrupting long-distance trains to Amsterdam, and closed the Avus autobahn.

The nearest residential building was nearly 2 miles away and people in the area were urged via mobile phone warnings and radio broadcasts to close windows and doors and turn off air conditioning appliances. Clouds of thick grey smoke dominated the skyline and the sounds of explosions were heard over several miles. No injuries were reported.

The police and fire services were using drones and helicopters to gauge the development of the fire and carrying out containment measures to stop it spreading, including watering the edge of the forest. A spokesperson said three separate blazes had been identified.

The intensity of the heat was holding forces back he said, adding that there was a need to frequently bring in fresh firefighters because of heat-related exhaustion. Reinforcements have been called from other parts of Germany.


Jan Thomsen, of Berlin’s environment department, said the lack of rain meant the fire was able to take hold quickly.

He said the forests were bone dry and had “not been able to recover due to the long periods of drought.” Asked by reporters whether it was sensible to have an explosives site in a forest, he said: “We will have to deal with these safety questions once the cause of the fire has been ascertained”.

Frankly that's nothing new. Forest fires on CFB Cold Lake anyone? I don't want to think of some other ranges that may or may not have other materials of concern. Or there have been numerous BC fires on former CFB ranges that have resulted in staff being pulled off the line due to things going boom and pop. The solution is trying to communicate the presence prior to operations occurring (a key fact for incoming resources briefing...hint hint) and at least in Canada the training is to pull back if conditions are unsafe. Have not dealt with any EU firefighters but I would assume they work on the basis of a chance of live ordnance in pretty much all areas, especially those areas that might have been reforested but were former battlegrounds.

I missed the original post on the Colorado Fire....would argue parts of Fort Mac and Slave Lake both got hit with the same effect as the 2022 Marshal Fire in Colorado. Extremely high winds drove fire into town + significant ember aerial transport onto asphalt shingles + extremely fast events limiting the ability to respond + starting in a bad location (i.e. adjacent to town). These were then further compounded by limited escape routes (a key cause to the number of fatalities in the California Camps Fire). Small fires in bad locations can be way more complex than a huge fire in the middle of nowhere.
You must log in or register to reply here.

Politics and Policies that affect private busines, the economy and impact on GDP
3 4 5

Coast Guard could triple base size on Seattle waterfront as U.S. ramps up Arctic presence