The USMC's AAVs of the future?

The US Marine Corps (USMC) is assessing industry responses to the second of two draft requests for proposals (RfPs) for an eight-wheeled amphibious combat vehicle (ACV) optimised for land operations and shoreline tactical mobility.

Once ACV 1.1 developmental and operational testing is completed, the USMC will downselect to a single contractor in the second quarter of FY 2018 to meet the approved acquisition objective of 204 vehicles, comprising 56 low-rate initial production (LRIP) vehicles with options for the full rate production (FRP) of 148 vehicles.

The Integrated Program Plan includes an LRIP Lot 1 requirement for 26 vehicles in standard personnel carrier configuration (plus four vehicles for live-fire lethality and survivability trials). LRIP Lot 2 (FY 2019) will see the construction of 30 ACVs, with FRP Lots 1, 2, and 3 adding 30, 80, and 38 vehicles, respectively, in FY 2020, FY 2021, and FY 2022.

Future plans include the procurement of 490 enhanced ACV 1.2 vehicles, reintroducing an organic over-the-horizon ship-to-shore capability and, in the longer term, an all-new ACV 2.0 intended for high-speed surface transit.

Meanwhile, the legacy AAVs will undergo an upgrade programme extending their lives to 2035; thereafter ACVs alone will provide the amphibious lift capability for 12 marine battalions.

The BAE Systems/Iveco SuperAV vehicle is one of the candidates for a US Marine Corps programme seeking an eight-wheeled amphibious vehicle optimised for land and shoreline operations. Source: BAE Systems
Click to expand... 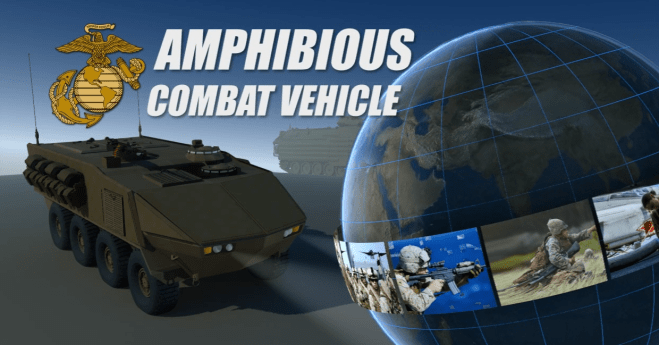 The Marines' Justification for the ACV and MPC

At present, the Marines use the AAV-7A1 series amphibious assault vehicle to move Marines from ship to shore. The Marines have used the AAV since 1971 and will continue to use it until replaced by the ACV or a similar vehicle. Over the years, the Marines claim the AAV has become increasingly difficult to operate, maintain, and sustain. As weapons technology and threat capabilities have evolved over the preceding four decades, the AAV - despite upgrades - is viewed as having capabilities shortfalls in the areas of water and land mobility performance, lethality, protection, and network capability. The AAV's two-mile ship-to-shore range is viewed  by many as a significant survivability issue not only for the vehicle itself but also for naval amphibious forces.

While the AAV has some armor protection and can operate inland to a limited extent, it is not intended for use as an infantry combat vehicle. The Marines do have the LAV-25, Light Armored Vehicle-25, an eight-wheeled armored vehicle that carries a crew of three and six additional Marines. The LAV-25 is armed with a 25 mm chain gun and a 7.62 mm machine gun but is not fully amphibious as it cannot cross a surf zone and would get to the beach via some type of connector such as the Landing Craft, Air Cushioned (LCAC). The LAV-25 has been in service since 1983. According to the Marine Program Executive Office (PEO) Land Systems, the LAV is not employed as an armored personnel carrier and usually carries a four-person Marine scout/reconnaissance team in addition to its crew. In this regard, the MPC was viewed as necessary by Marine leadership for the transport and enhanced armor protection of Marine infantry forces.

The Marines' 2011 Request for Information (RFI) to industry provides an overview of the operational requirements for the ACV. These requirements include the following:

• The vehicle must be able to maneuver with the mechanized task force for sustained operations ashore in all types of terrain. The vehicle's road and cross-country speed as well as its range should be greater than or equal to the M-1A1.

• The vehicle's protection characteristics should be able to protect against direct and indirect fire and mines and improvised explosive device (IED) threats.

• The vehicle should be able to accommodate command and control (C2) systems that permit it to operate both at sea and on land. The vehicle, at a minimum, should have a stabilized machine gun in order to engage enemy infantry and light vehicles.

The Marine Corps' 2011 Request for Information (RFI) to industry provided an overview of the operational requirements for the MPC. These requirements included the following:

• The vehicle must accommodate nine Marines and two crew members and have a "robust tactical swim capability (shore-to-shore [not designed to embark from an amphibious ship]) and be capable of operating at 6 knots in a fully developed sea."

• The vehicle must be able to operate on land with M-1A1s in mechanized task forces across the Marine Corps' mission profile.

• The vehicle shall provide protection for the occupants from the blasts, fragments, and incapacitating effects of attack from kinetic threats, indirect fire, and improvised explosive devices and mines.

• The vehicle shall be capable of firing existing Marine anti-structure and anti-armor missiles and should be able to accommodate existing command and control (C2) systems.

QUANTICO, Va. — BAE Systems and SAIC beat out three other manufacturers in a competition to build engineering and manufacturing development prototype vehicles for the Marine Corps' next-generation Amphibious Combat Vehicle (ACV) that will ferry troops ashore and into battle, the service announced today.

BAE's contract is for $103.8 million, while SAIC's is for $121.5 million.Each company will build 16 eight-wheeled vehicles to be tested over the next two years in order to replace the Marine Corps' aging Vietnam-era amphibious assault vehicle. The service will then pick a winner in 2018 to deliver 204 vehicles by 2020.The initial contract covers building 13 vehicles due to available funding and then the Marine Corps will exercise options to build three more vehicles.

From a Canadian stand point too bad GD Land did not win with the LAV 6.0  It would be good for the London Plant.
You must log in or register to reply here.

The U.S. Marines’ Amphibious Combat Vehicle Is a Beast