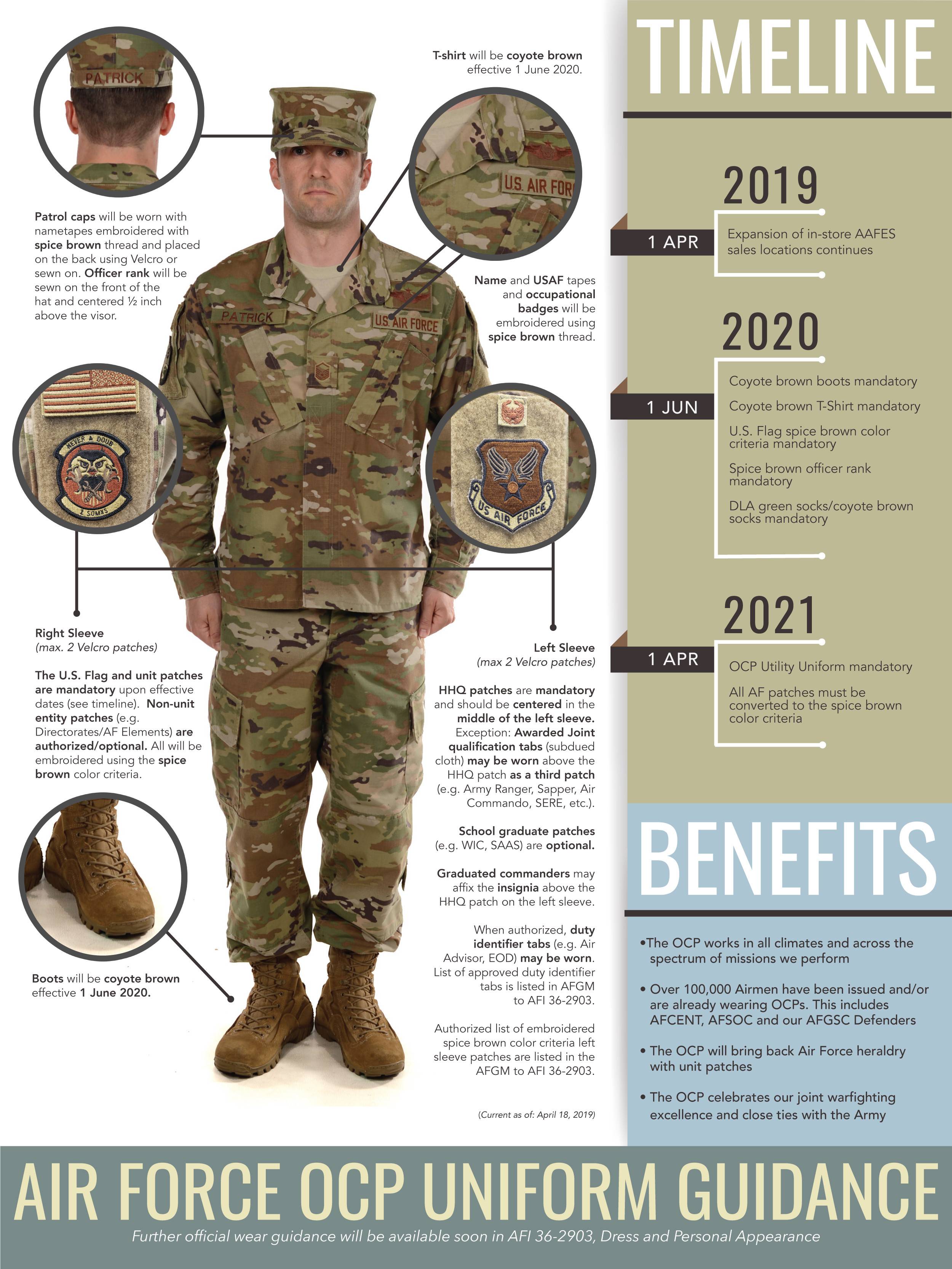 The changes highlighted include authorization of the two-piece Flight Duty Uniform in garrison and updated patch guidance for the OCP uniform.

In May 2018, Air Force leaders decided to transition to the OCP following feedback from Airmen that it is the best, battle-tested utility uniform available. It will also eliminate the need to maintain two separate uniforms – one for in-garrison and one for deployments.

The service expects to fully transition to OCPs by April 1, 2021.
Click to expand...

Most of their trades don't need a camo uniform.They get just wear the OD green worn years ago. Those on the pointy end could wear the camo of the Army troops they are with. Where is that space uniform ?

tomahawk6 said:
Most of their trades don't need a camo uniform.They get just wear the OD green worn years ago. Those on the pointy end could wear the camo of the Army troops they are with. Where is that space uniform ?
Click to expand...

It's there: It's all black with little white dots. The Spacemen just happen to be standing in front of a picture of space.  ;D 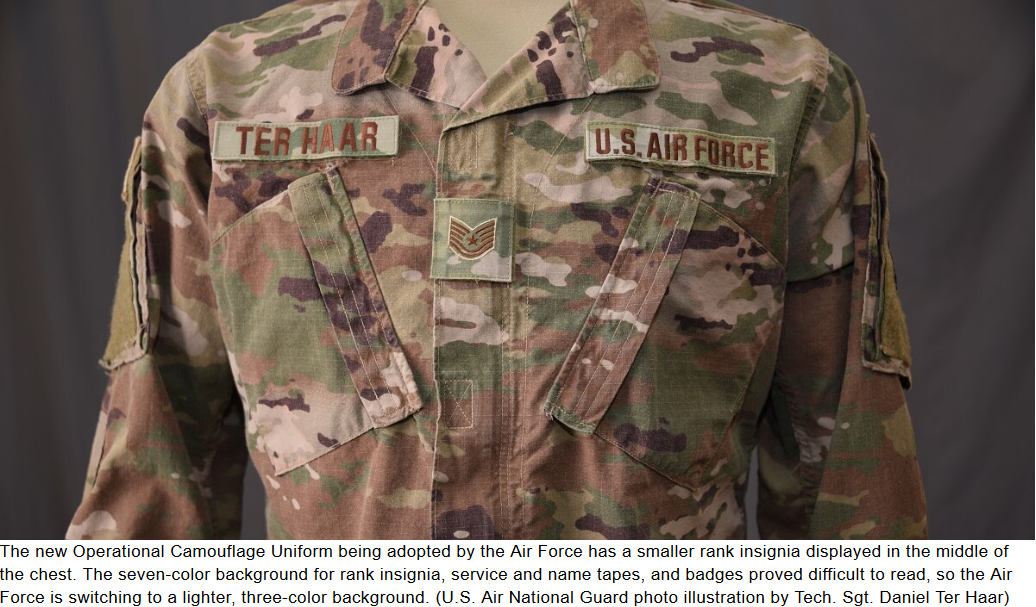 Looks like the Occupational Camouflage Pattern’s camo is so good you can't even read names off of it.

The Air Force said Thursday it is tweaking the newly-adopted OCP uniforms to make things like nametapes and rank insignia easier to read or identify.

"We received significant feedback that prompted this update," Lisa Truesdale, Air Force military force management policy deputy director, said in the release. "The current rank insignia, badges, name, and service tapes on the OCP uniform are sometimes challenging to see against a seven-color background. Simplifying these features on a lighter, three-color pattern - while not compromising the overall functionality of the uniform - will improve our situational awareness in day-to-day interactions."

While the OCP is vastly more popular than the old Airman Battle Uniform it is replacing, visibility of rank insignia suffered in the transition, especially on the enlisted side. The ABU worn by enlisted airmen had large, very visible rank insignia worn on the upper part of each sleeve.

But the OCP shifted the rank shown on its top part to a single, smaller insignia worn in the middle of the chest. This sometimes made it tricky to count the number of chevrons on someone's chest and, for example, tell a senior master sergeant from a chief from a distance. 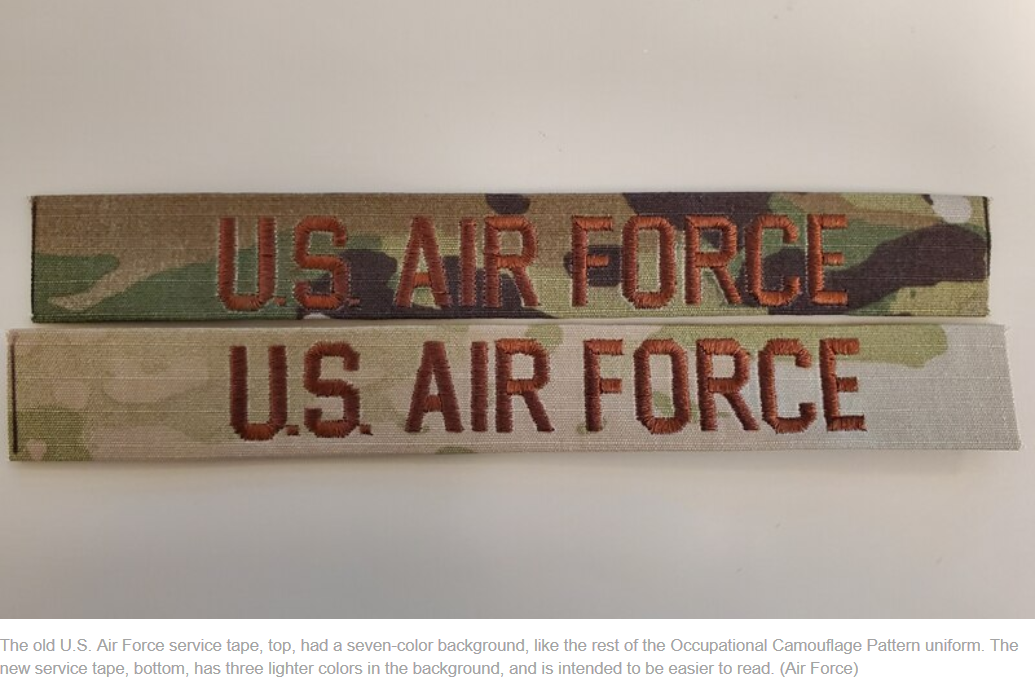 The popular Marine Corps comic strip Terminal Lance spoofed this dilemma in a 2010 entry called "The Stare." In it, a hapless Marine struggles to decipher the blob of black rank on a senior noncommissioned officer's collar to properly wish him good morning, but isn't fast enough and is told, in true Marine fashion, "Too late, **** knuckles."

In it, a hapless Marine sees an SNCO walking his way, but can't decipher his rank. He rapidly rifles through ranks and settles on "Good morning, master sergeant!"

It took us twenty years to figure out and fix the problem. Luckily the USAF were able to learn from our experience.

I recall a time when name tags weren't required because we worked together so much you automatically knew everyone's name.

daftandbarmy said:
I recall a time when name tags weren't required because we worked together so much you automatically knew everyone's name.

Yeah, but we all know that looking cool is like 80% of the job...  pfffttttt

Do I NEED a holster and non-functional sidearm?  No.  Does it make me look way cooler when doing community relations and talking to the ladies?  Yes.  8)  (Just let me live in my own imaginary happy place people, it's all I have left)


Come on man... common sense?  logical thinking?  You remember what organization this is, right?
You must log in or register to reply here.

It’s official: The [US] Air Force will let airmen put their hands in their pockets while in uniform
2