In honour of the 70th anniversary of the Battle of Kapyong, here is my timeline of the battle:

24 April
0300 – Mortar Pl was dug in with their base plates set up and zeroed
0400 – Chinese Army puts in an attack on 3 RAR, it is estimated to be two BN strong
1130 – B Coy 2 PPCLI moved location to reinforce the right flank
1400 – 6 Pl B Coy comes under effective small arms fire
1500 – CO 3 RAR is forced to conduct a fighting withdrawal south
2130 – Approximately 400 Chinese were massed below 6 Pl, OC B Coy calls for fire on the enemy
2230 – BN size attack is put in against B Coy which resulted in the Chinese Army overrunning 2 sections of 6 Pl
2400 – Another BN size attack is put in against B Coy and the remnants of 6 Pl were forced to fix bayonets as they ran out of ammo before the attack was repulsed.

25 April
0100 – Enemy detected forming up in valley they were dispersed by quick and accurate mortar fire
0130 – Around 200 enemy attack 10 Pl, defensive fire was called on 10 Pls position (there is some controversy on who called in the fire, OC B Coy or 10 Pl Comd)
0200 – Enemy attacks BHQ, 81mm mortars and .50 Cal MG open up at the enemy at 200 yards and repelled the attack.
0400 – CO requests aerial resupply
1000 – Four C119 aircraft drop down supplies to the besieged Patricias
1900 – 2 PPCLI receives warning order to move on the 26th of April. They were relieved by the 1st US Calvary Divison

Effects of the battle, the battle of Kapyong prevented the Chinese army from capturing Seoul, The COs of 2 PPCLI and 3 RAR were awarded the DSO and the following units were awarded the United States Presidential Citation: 2 PPCLI, 3 RAR, and A Coy 72nd US Heavy Tank Battalion. For the Canadians, there were 12 soldiers KIA.


It is my belief that some of the factors that contributed to the success of the battle were that during the CO’s recce he was able to go forward and observe the ground from the enemies point of view, this allows him to sight his position in appropriate locations planning on mutual supporting from the individual platoons a principle of defence which we still use today. The other factors are ones in which we have lost or are slowly losing, they are the effective use of the Mortar, at this time 2 PPCLI had a mortar Pl which provided dedicated indirect fire support to the unit with its 81mm mortars. Today’s infantry units are starting to regain this capability, the last is a machine gun fire plan using 30 cal and 50 cal machine guns which we are slowly losing the skill set to do. 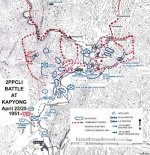 Well done, Mark, I could almost smell the cordite.

May I add an honourable mention to 16 Field Regiment, Royal New Zealand Artillery, for the support to both the Patricias and to the Australians during the duration of the battle? This, of course, includes answering the call for fire on their own position by B Company of the Patricias, and the Kiwis fired more or less continually during the duration of the battle.
You must log in or register to reply here.

In Praise of the Infantry - Her Majesty's Odd Job Men.