While some of the offshore patrol ships were built in the 1990s, most of the vessels these will replace were built between 2000-2009.

We can take the used Armidale-class to replace our MCDVs  :

The twelve Australian vessels are based on the PV80 design with the first two vessels to be built at ASC's Osborne ship yard in South Australia before production moves to Civmec's Henderson ship yard in Western Australia.

On 15 November 2018, the Chief of Navy, VADM Mike Noonan, announced that the OPV will be known as the Arafura Class with construction commencing at the Osborne ship yard.

The primary role of the OPV will be to undertake constabulary missions, maritime patrol and response duties. State of the art sensors as well as command and communication systems will allow the OPVs to operate alongside Australian Border Force vessels, other Australian Defence Force units and other regional partners.

Through the use of two changeable, containerised mission systems, secondary roles of minehunting, unmanned aerial system (UAS) missions, and hydrographic survey can also be performed.

The lead vessel is planned to planned to enter service in 2021.
Click to expand...

The first steel for the future HMAS Arafura was cut in Adelaide today.

sunrayRnfldR said:
The first steel for the future HMAS Arafura was cut in Adelaide today.
Click to expand...

How is that possible? The Australian government didnt argue about it for 20 years, first. Isn't that how ships are built?

SeaKingTacco said:
How is that possible? The Australian government didnt argue about it for 20 years, first. Isn't that how ships are built?
Click to expand...

I bet if Canada was on the other side of the world surrounded by ocean, with no USA to come to our instant aid we would be build ships quickly without any BS.
Y

Chief Engineer said:
I bet if Canada was on the other side of the world surrounded by ocean, with no USA to come to our instant aid we would be build ships quickly without any BS.
Click to expand...

Not with the current generation of legislators.  They seem to exist in a never-never land.  Forget naval ships, they can't even order an ice breaker without taking 20 years to decide and the notion of reliance upon the U.S. doesn't apply to them.

and these are what they are replacing, basically the same as our new Hero class

SeaKingTacco said:
How is that possible? The Australian government didnt argue about it for 20 years, first. Isn't that how ships are built?
Click to expand...

I'm sure they did, loudly, in closed doors.

The ADF isn't seen as a political football, but I'm almost convinced that the media there also have an agreement to make it a headline issue unless something egregious (Jedi Council, OP Honour-y stuff) comes to light.  They don't seem to go off at every small issue the ADF has, or make mountains out of molehills like our MSM sometimes does. 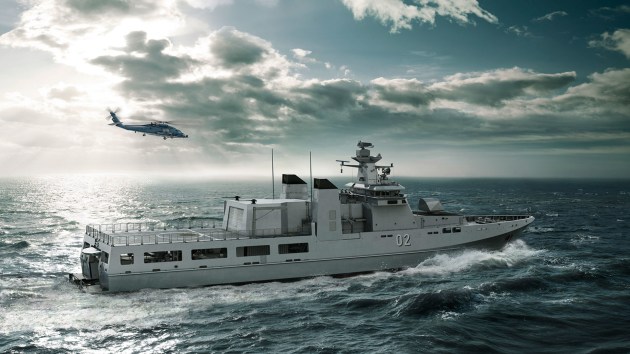 
With Janes Summary of Design

Key Points
Australia has marked further progress in its Sea 1180 programme with the naming of its new OPV class and the start of steel welding on the first of class
The programme’s first of class is expected to be delivered by 2021
The Royal Australian Navy (RAN) has named the offshore patrol vessels (OPVs) that have been acquired under the country’s Sea 1180 Phase 1 programme as the Arafura class.

The name was revealed on 15 November by the service’s chief, Vice Admiral Michael Noonan. Named after a sea in the northern approach to Australia, the Arafura class has been acquired to replace the RAN’s fleet of Armidale- and Cape-class patrol boats, Huon-class minehunters, and Leeuwin- and Paluma-class survey vessels.

The vessel has a standard displacement of 1,640 tonnes, with an overall length of 80 m, an overall beam of 13 m, and a hull draught of 4 m. It can take a crew complement of 40, with accommodation for up to 60 personnel.

Powered by two 8,500 kW diesel engines, the OPV can attain a maximum speed of 20 kt and a standard range of 4,000 n miles at 12 kt. It has been equipped with a flight deck for unmanned aerial system (UAS) operations, and can carry two 8.5 m and one 10.5 m rigid-hull inflatable boats (RHIBs) for maritime interdiction operations.

Each OPV will be armed with a 40 mm naval gun in the primary position and two 12.7 mm machine guns, while the suite of sensors includes the Scanter 6002 air and surface surveillance radar system from Terma, which will be incorporated with the EOS 500 electro-optical fire-control director.

The vessel will also be equipped with a 9LV-based Situational Awareness System (SAS) from Saab Australia.
Click to expand...

In a further milestone for the Offshore Patrol Vessel (OPV) program, the two halves of the first of class ship, Arafura, built by Luerssen Australia and its partner ASC have been brought together and welded to form a complete hull.
Click to expand...

https://www.youtube.com/watch?v=eVq5JiKv5tw
You must log in or register to reply here.

At least we could (probably) invade New Zealand: How small is the RCN, really?