A picture of the Cyclone landing on the aircraft carrier HMS Queen Elizabeth prior to her arrival in Halifax.  Shared from Trident News under the Fair Dealing exception of the Canadian Copyright Act.

Maybe it's just me but...I find she looks bigger in pics than she does in person.  Saw one close to a NH90 though and the 148 looks slightly bigger to me.

Haven't seen much in way of news from the HFX deployment...

Eye In The Sky said:
Maybe it's just me but...I find she looks bigger in pics than she does in person.  Saw one close to a NH90 though and the 148 looks slightly bigger to me.

Haven't seen much in way of news from the HFX deployment...
Click to expand...

Yes, volume and tonnage a Cyclone seems about 20% larger

Bluedrop Training & Simulation Inc., a subsidiary of Bluedrop Performance Learning Inc., has renewed its contract with Sikorsky, a Lockheed Martin Company, to provide instructors and training courseware for pilots and maintainers for Canada’s CH-148 Cyclone maritime helicopters. The agreement extends the services that Bluedrop is providing to the program until March 2024. The estimated value of the contract is US$29.5 million.

“This agreement will ensure the continuation of our training services for the RCAF aircrew and maintenance personnel at 12 Wing Shearwater,” said Jean-Claude Siew, Bluedrop executive vice-president, Technology and Simulation. “We thank Sikorsky for its continued trust in Bluedrop and our Halifax-based training team.”

Sikorsky leads an industry team that has delivered 19 of 28 CH-148 Cyclone maritime helicopters to the Royal Canadian Air Force. Bluedrop is part of Sikorsky’s In Service Support team that is training and supporting Cyclone aircrew and technicians to achieve high operational readiness.

arrived in Shearwater earlier this week. To celebrate, here’s a video of its arrival.
Canada’s CH-148 is a maritime helicopter that conducts anti-submarine and anti-surface warfare, as well as search and rescue operations. The CH-148 Cyclone can also conduct utility transport missions in support of national and international security efforts.

Meanwhile being reported as a UFO

This sucks, but the prudence is understandable. Hopefully the cause and the solution is found and done quickly. https://twitter.com/AngusTopshee/status/1263514442312101890/photo/1

The Martlet missile offers a unique capability to defeat asymmetrical and terrorist threats in the littoral environment, such as Fast Inshore Attack Craft (FIAC), RIBs or even jet skis. The precision laser beam riding guidance concept of LMM and the accurate launcher stabilization has been demonstrated for the first time in a UK MoD Sponsored TDP with several firings from a T23 Frigate off the Pembrokeshire coast at an operationally representative remote-controlled FIAC target. It has a weight of 13kg, travels at Mach 1.5, has a range exceeding 6 km, and an immediate launch capability.
Click to expand... This possible to do with a Cyclone?

This possible to do with a Cyclone?
Click to expand...

Not currently. An air to surface missile is on the “to do” list.

This possible to do with a Cyclone?
Click to expand...

They had me at 'will destroy jet skis.' I hate those things #pi**edoffkayaker

SeaKingTacco said:
Not currently. An air to surface missile is on the “to do” list.
Click to expand...

IIRC the attachment points for the helo are universal, so where you place the torp you can place any helo carried weapon system.  I know CANSOFCOM's ears perked up when they heard that.  So quick huddle troops... "get CANSOFCOM super interested and they will pay for helo upgrades....".  I wouldn't be the first time.
D

Attachment points are not the same as USB plug and play - still sensor and control system integration involved, to say nothing of airworthiness testing.

All costly, and all demand personnel resources that are in short supply.
B

Underway said:
IIRC the attachment points for the helo are universal, so where you place the torp you can place any helo carried weapon system.  I know CANSOFCOM's ears perked up when they heard that.  So quick huddle troops... "get CANSOFCOM super interested and they will pay for helo upgrades....".  I wouldn't be the first time.
Click to expand...

The BRU (Bomb Release Unit) is universal, the wiring isn't.  However, most if not all surface weapons the Cyclone would be considered for mounts a rack to the BRU, and then that rack or rail fires the weapon.  You can see in the picture above there is a five missile launcher on each weapon station for the Martlet.

Historically there has been a problem in that each weapon type required a separate wire bundle and interfaces.  Some need seeker head guidance, some coordinates, some current GPS position, some a video feed etc, etc.  Torpedoes need different stuff.  There is a STANAG (1760) that is intended to make all NATO air launched weapons use the same wiring standard to make it easier to integrate weapons.  However, the MK-54 Torpedo doesn't follow it.  The MK-54 uses the same wires as the 46 but the are repurposed to different electrical formats to enable a broader range of selections.  This requires modifications to the Stores Management Computer.

We integrated the AGM-65 into a version of the MDMS used on the Cyclone for the Peru H-2 Sea Sprite.  It did not use STANAG-1760 but instead the legacy Maverick interface.  The Maverick uses the LAU-117 launch rail and electrical interface (or the LAU-88 for triple rails).  Raytheon produces a version of the LAU-117 called the Dual Mode Launcher that can use either legacy Maverick interface or STANAG-1760 (http://www.midkiff.cz/obj/firma_produkt_priloha_140_soubor.pdf). Maverick is (or was?  SupersonicMax?) in service with the CF-18 using legacy LAU-117 rails.

To the best of my knowledge Martlet is not STANAG-1760 compliant, and needs a laser designator (which also means it would need seeker head control to get the head on the designation).  This would also require a new EO turret for the Cyclone as the current SAFIRE-3 does not have a designator, and the integration and wiring to the missile.  Ironically the last version of the Sea King did have a laser (MX-15) but the interlock was hardwired off (laser safety integration on an aircraft is a big deal).

It is understood at a broad level what it would take to make the Cyclone Stores Management Computer and wiring compatible with STANAG-1760, but there is no plan to do so at this time.

Edited to add: Just getting the missile on the aircraft is not everything.  Then you need safe release trials.  Then ground handling safety procedures.  Possible laser safety procedures. Then weapons employment and release procedures.  Then ship safe storage (which historically has been an issue when discussed).  Then load and download procedures at sea, and how they interact with hot fuel and crew change.  Then launch and recover procedures, remembering that the hot missile would be pointed directly at the hangar at some point, unless you did an yaw'd launch and recovery, turning before pulling the pins (how exactly would you do that, connect the guide winch?).  See USS Forrestal at Yankee Station (and John McCain's interesting involvement) where one of the contributing factors is they pulled the pins before getting to the cat to speed up the launch... 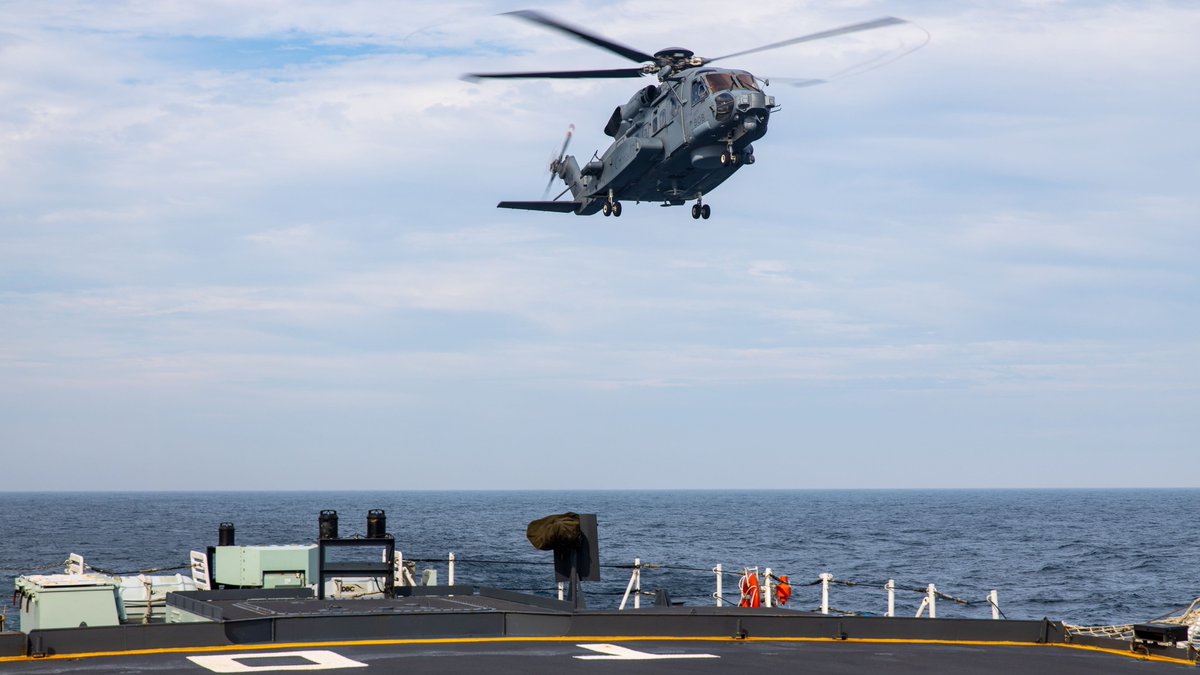 Nice picture from last week of RAPTOR about to land on TOR...

And, one from the TF Latvia FB page.

I note the RN flies two main types of helicopter (Actually 4 if you count the two types of Merlin's and Wildcats) With the addition of the AOP's into the fleet, does it start to make sense to have a smaller helicopter to accompany them, which would like lessen footprint, fuel consumption and maintenance?
D

RCAF can't sustain aircrew now; adding a platform to support a ship class which is, at best, a make-work "learn to make warships" project for ISS would be throwing good money after bad.

The AOP's are going to end up being more useful than you giving them credit for. For initial ice operations, the DND could hire TC helicopters and crews to provide ice reconnaissance and personal transport and light cargo moves. In fact you can supplement our existing helo's with contracted helicopters and crews, similar to how the RFA and USN do. With the down turn in the resource economy and small commercial drones eating away at the bread and butter jobs for helicopter companies, I suspect that DND pilots might not want to be in to much of a hurry to leave.

Colin, maybe not now (it has slowed down but not stopped) but as soon as the economy picks back up, they will leave again.  Decisions today should be made with that in mind.

Now that commercial drones carry stuff like LIADAR and other instruments, it's really eating into the work that helicopter companies used to stay alive and that's going to get worse for the smaller helicopter companies. I will say to rotary wing pilots, is don't count on a long term civy career as the supply of pilots is going to be greater than the jobs available in the next decade.
You must log in or register to reply here.