That could be. There has been some trial work done on Asterix, but is not yet finished.

I know that, in certain quarters, there is a strong desire to see a Det on Asterix. At this point, we are still working out the kinks in frigate deployments.
S

It's being reported that a Cyclone has had a "hard" landing on the Asterix near Hawaii. No injuries.  I can not link the report from the National Post

1/4
On February 18, 2019, the CH-148 Cyclone helicopter, currently deployed on Operation PROJECTION, experienced a hard landing on board Naval Replenishment Unit (NRU) ASTERIX West of Kauai, Hawaii.
2/4
No serious injuries were reported to @CanadianForces or civilian personnel during the incident. The damages to the Cyclone are still being assessed, no damages were reported to NRU ASTERIX, and an investigation has been initiated to determine the cause of the hard landing.
3/4
We’d like to thank our deployed personnel and the civilian staff of the ASTERIX for their professionalism and hard work during this incident.
4/4
The Cyclone and NRU ASTERIX are operating with HMCS Regina in the Asia Pacific Region on #OpPROJECTION.

They are headed to Guam and the MRP was being worked up, the last I heard late last week.  This one is more than a 'tire change'.

Eye In The Sky said:
They are headed to Guam and the MRP was being worked up, the last I heard late last week.  This one is more than a 'tire change'.
Click to expand...

Not a whole lot of freeboard if that undercarriage compresses too much!

Good thing we bought a few extra airframes, for those inevitable occurrences!!

It is not nice to make people gag on their morning coffees, CBH99.

Saw an update on Facebook by an air type embarked on Asterix that they got the tail put back together and were spinning the head.

Sikorsky has unveiled upgraded versions of its S-92 helicopter that have been developed for a number of roles, including search and rescue (SAR).

"The two variants will share a nearly identical configuration, with S-92B helicopters also featuring enlarged cabin windows and plans for a common cabin door suitable for offshore and SAR configurations," Sikorsky said in a statement. "These changes to the venerable S-92 helicopter will introduce new technology that is focused on reliability and operating cost reduction, while at the same time delivering increased capability."
Click to expand...

The military hasn’t placed flight restrictions on its Cyclone helicopters, despite not knowing the cause of a hard landing aboard Halifax-based Asterix in the Pacific Ocean last month where the pilot was a civilian.

The CH-148 Cyclone’s main rotor blades hit and damaged the tail of the aircraft while landing on the Asterix during wind-envelope testing on Feb. 18.

The helicopter and supply ship were operating with HMCS Regina on Operation Projection near Hawaii.

There were no serious injuries, said the Department of National Defence spokeswoman. But she wouldn’t say no one was injured.

The test pilot recently retired from the Royal Canadian Air Force with “extensive Sea King and Cyclone flight experience,” and was brought in under an agreement with Transport Canada, said a Department of National Defence spokeswoman.

The pilot took “refresher and currency training at the Cyclone Operational Training Unit and re-qualified on the Cyclone,” said the spokeswoman.

The incident took place during daylight and in relatively calm conditions, military sources told The Ottawa Citizen. The helicopter appeared to suddenly drop about two metres onto the deck.

“In a Sea King if the pilot is doing something that is incorrect or potentially hurtful or could cause an incident, the non-flying pilot could intervene,” said McWha, who flew Sea Kings from 1967 until 1994.

“In a Cyclone, it is not possible for the non-flying pilot to intervene quickly enough to stop something like this from happening,” he said.

McWha compared the Cyclone’s flight control system to two joysticks connected to a game, but when one moves, the other doesn’t.

“So if it’s sitting in the middle in a neutral position, you wouldn’t automatically know where it is,” he said.

The Cyclone also has a unique two-point landing: the first on the main landing gear and the second on the nose gear.

“That is strictly a matter of design features of the Cyclone,” he said.

The damaged Cyclone was taken to Guam with the Asterix and HMCS Regina to have its tail pylon replaced and is now back to full operational capability.

The Sikorsky-built Cyclones are the much-delayed replacements for the Sea King helicopters. The East Coast fleet of Sea Kings went out of service last year after more than a half-century.

"We can see 10 times farther underwater, and the Cyclone's radar and ESM (electronic warfare support measures) capabilities give us a chance to do above water surveillance 10 times greater than before," he said. "The Cyclone can identify contacts for the ship captain. On any given flight, the area you are able to pick up, whether that's identifying narcotics trafficking or unidentified smaller vessels, is 10 times greater, or 100 times as much area."

Two Cyclones are deployed — one aboard the Royal Canadian Navy's Halifax-class frigate, HMCS Regina, in the Middle East, to support Operation Artemis, the Canadian portion of CTF 150 — a multi-nation effort to battle terrorists and illicit flows of drugs, weapons, and people. The other deployed CH-148 is aboard the HMCS Toronto, in the Black Sea in support of Operation Reassurance — the Canadian contingent of NATO European deterrence efforts in Central and Eastern Europe.

In February, the Royal Canadian Navy accepted delivery of the 17th CH-148 of a planned acquisition of 28 by 2021 to replace the venerable Sea King anti-submarine warfare helicopters.

In addition, operational tests of Block 2.1 are to begin late next year with the possible delivery of the first CH-148 with Block 2.1 in 2021. Block 2.1 upgrades mission systems and sensor integration and increases component time between maintenance. For example, gear boxes are to increase from 600 hours of life to 2,000 hours.

The Cylone's "radar, sonar, and ESM are all connected to online databases, so as they encounter other contacts, the data base grows and the sensors get smarter," Connor said. That experience informs how the RCAF may use the Cyclone against potential adversaries, he said. The RCAF Lockheed Martin CP-140 Aurora aircraft has a similar data learning profile.

The Cyclone is to perform a variety of missions, including surveillance, utility, search-and-rescue, and tactical transport for national and international security efforts. Incorporating flaw tolerance and engine burst containment, the helicopter also has an aluminum and composite airframe that has lightning-strike and high-intensity radio frequency pulse protection, the Royal Canadian Air Force said.

Members of the Royal Canadian Air Force praised the performance of the CH-148 after it returned in January from its first international deployment aboard HMCS Ville de Québec, in support of Operation Reassurance.

It’s a Navy first! Last week a #RCAF Cyclone helicopter was working with a #RCNavy ORCA class vessel off Victoria #BC. #MARPAC 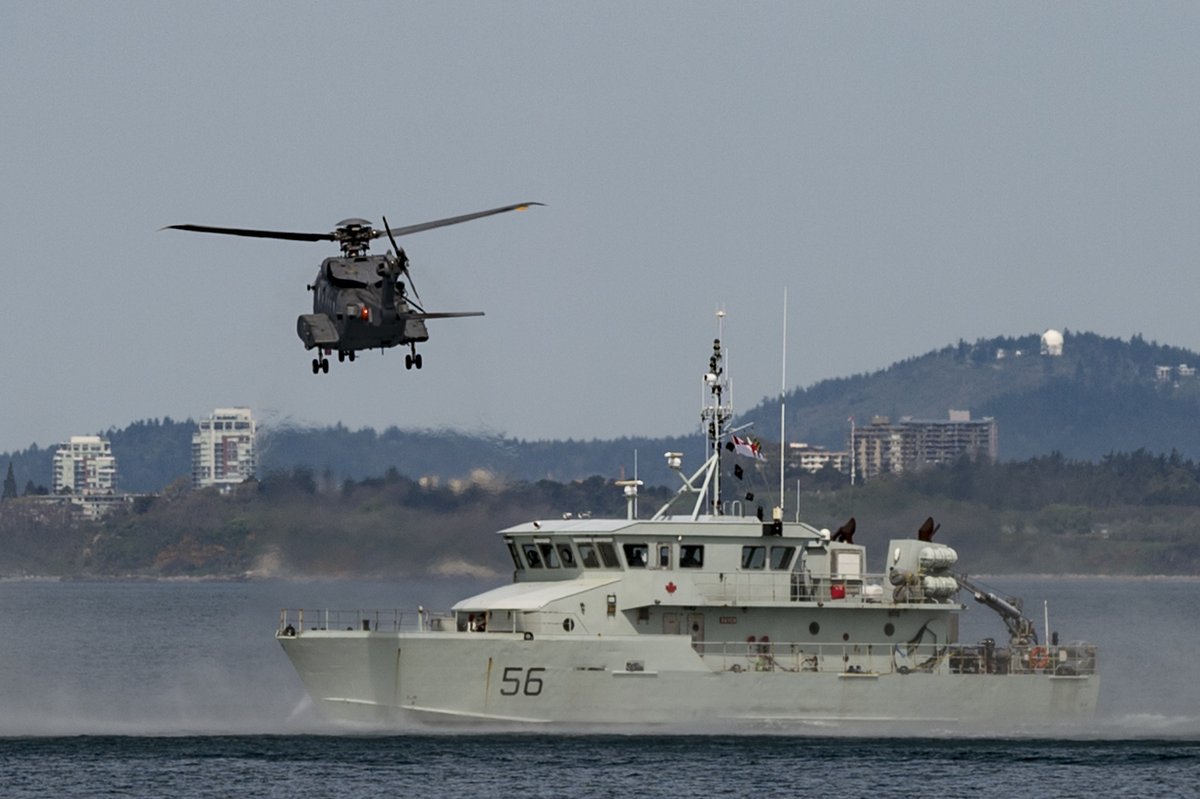 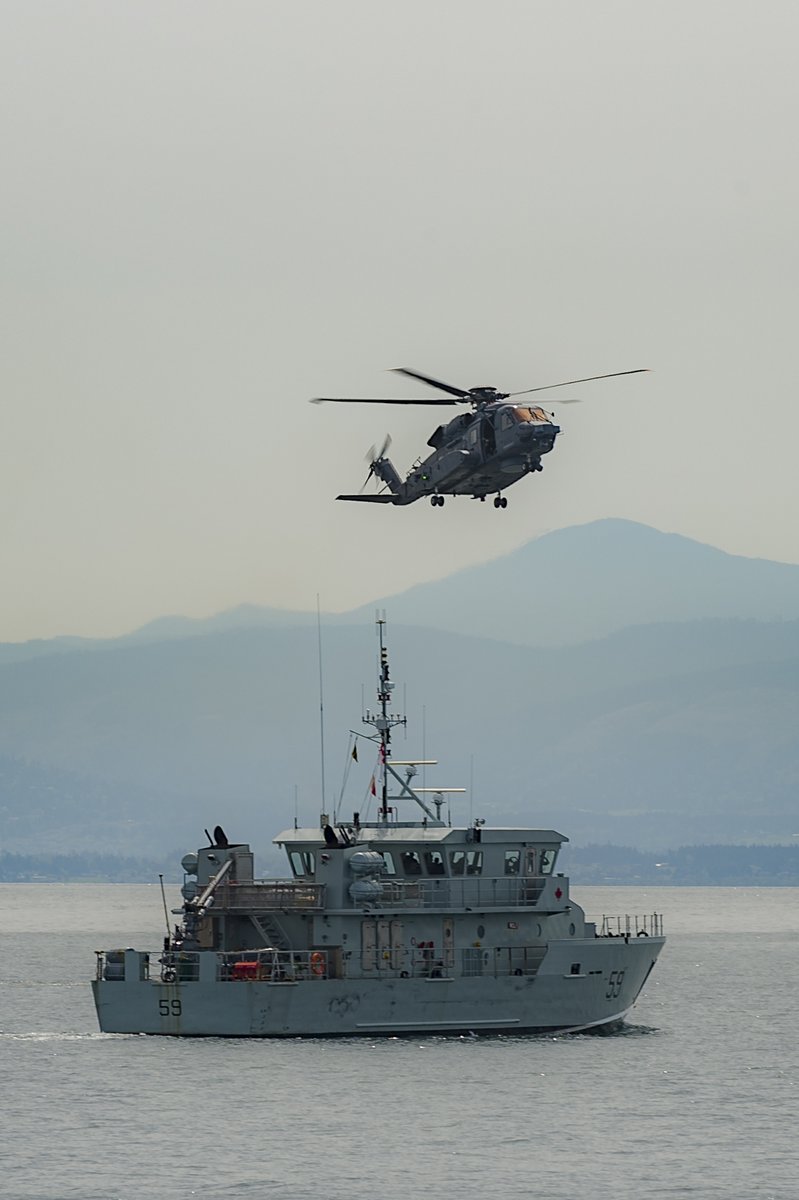 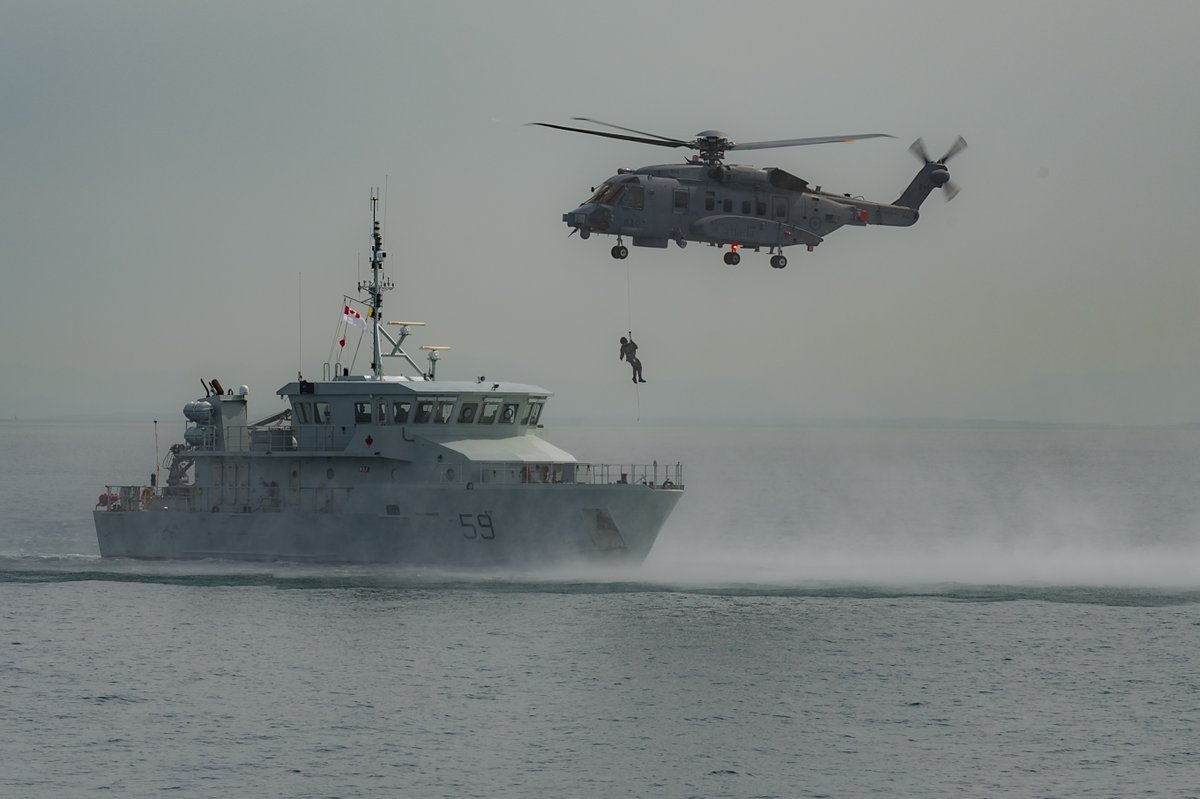 Check out these images from April 19 of a Canadian CH-148 Cyclone from Canadian frigate HMCS Toronto conducting the first ever Cyclone torpedo drop by an operational crew at sea to bring the helo to full Anti-Submarine Warfare status while in the Med with #SNMG2. 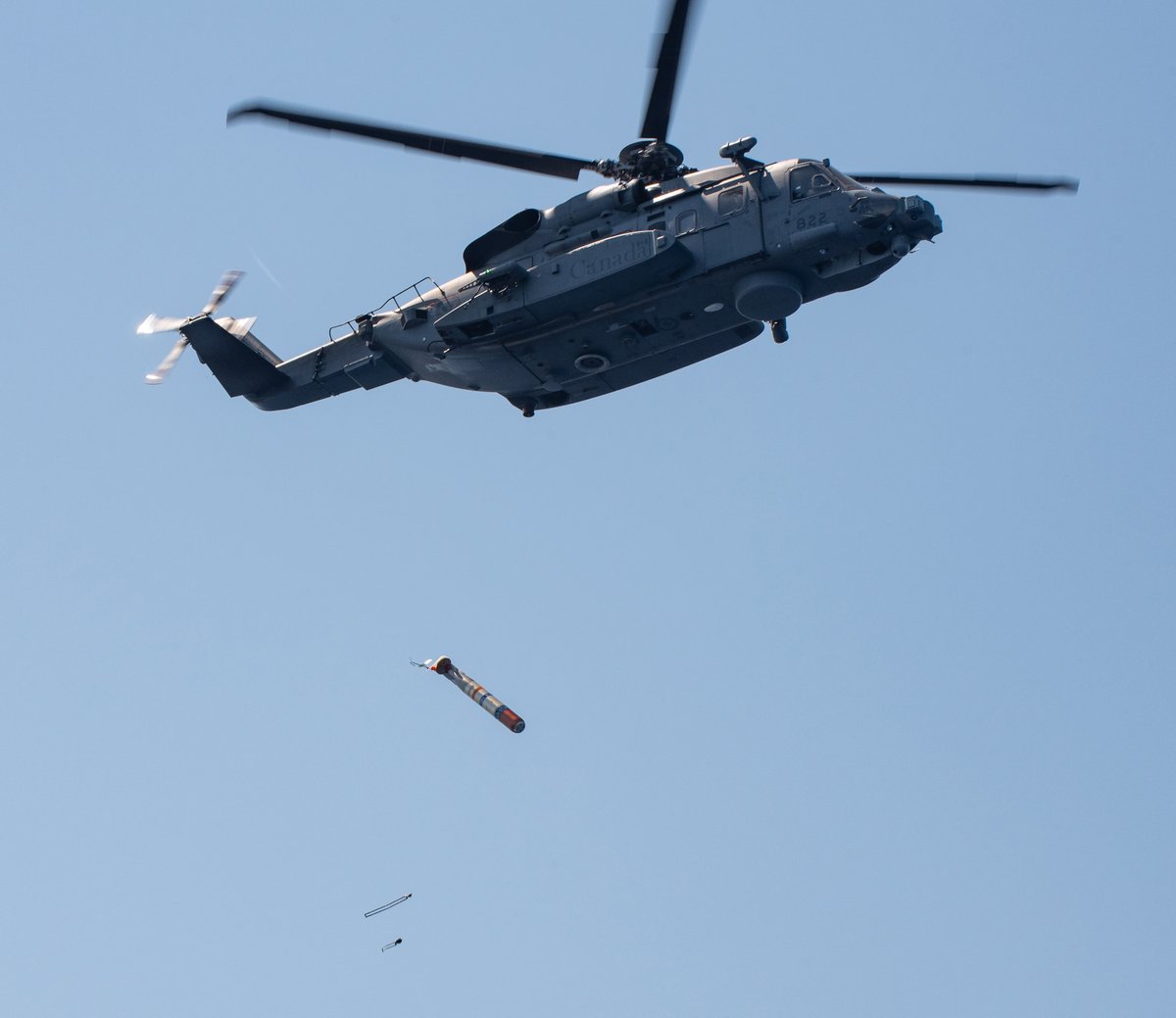 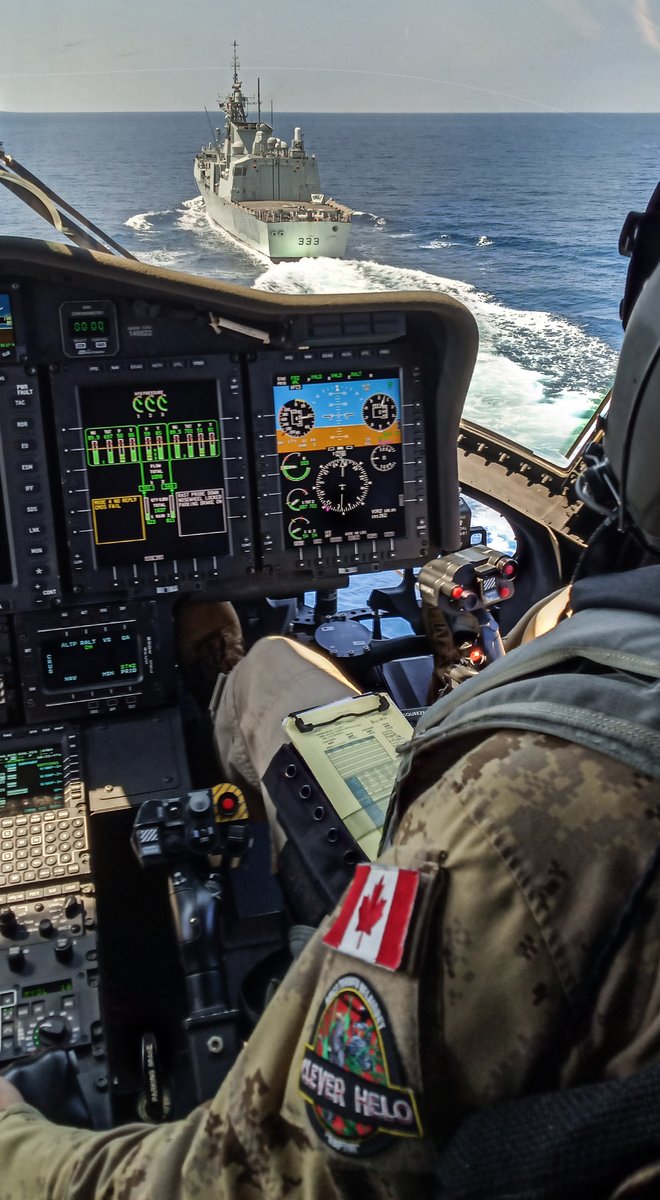 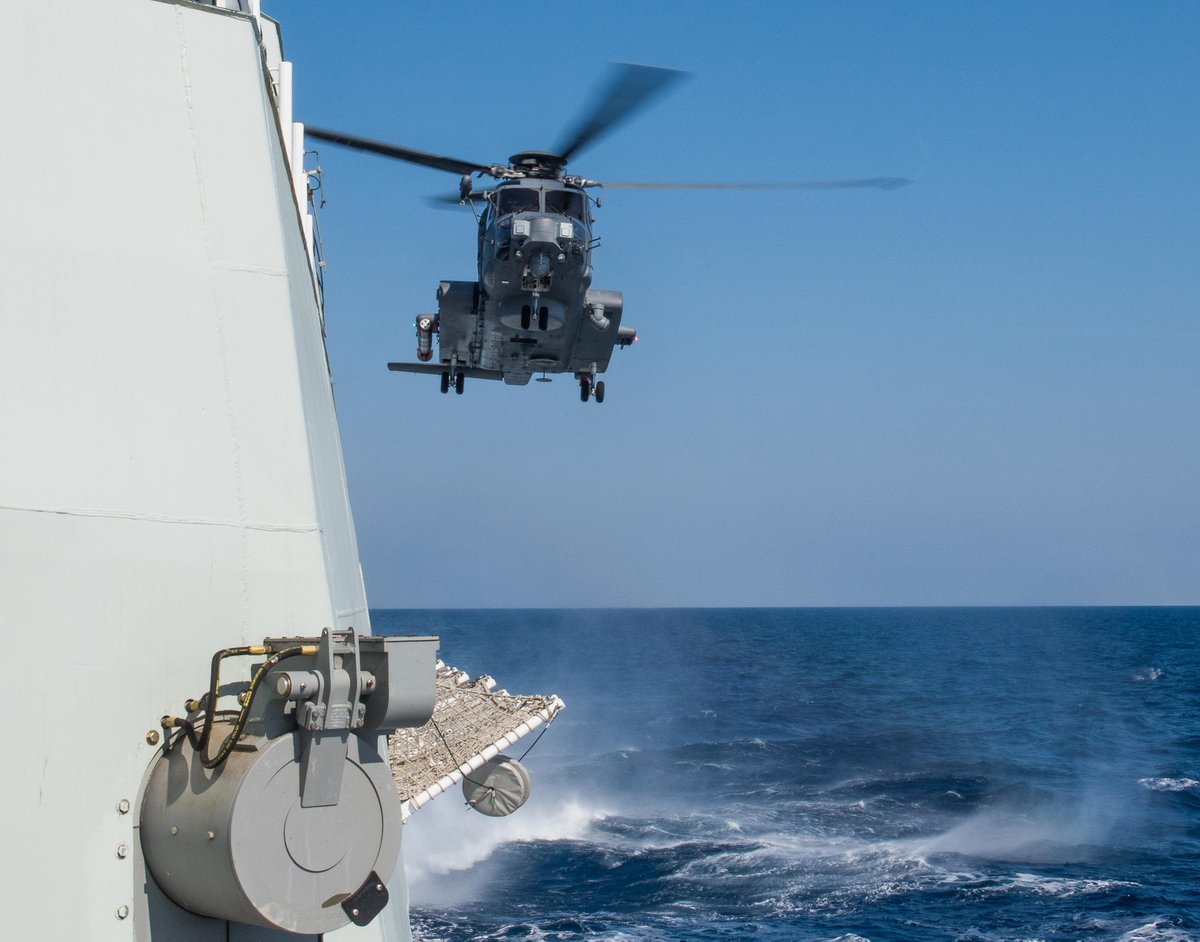 Nice pics!  Love the one of the torp falling.

What the device in the foreground sticking out of the ship? Some sort of launcher?

Colin P said:
What the device in the foreground sticking out of the ship? Some sort of launcher?
Click to expand...

That is one of the surface launch torpedo tubes.
S

Question.  From another forum.  The Cyclone can't land on water like the Sea King?  I would say no. But just checking.

Is that a big loss of a capability?  Was it used much?  I remember seeing Prince William do it in a Canadian Sea King a few years ago.
B

Spencer100 said:
Question.  From another forum.  The Cyclone can't land on water like the Sea King?  I would say no. But just checking.

Is that a big loss of a capability?  Was it used much?  I remember seeing Prince William do it in a Canadian Sea King a few years ago.
Click to expand...

No, the Cyclone can't.

The Sea King couldn't land on water operationally.  It was for emergencies.  The pilot's were trained to get the aircraft back off the water in some cases, or to shut down and hopefully not catch a tip to facilitate crew egress .

What Prince William did was called waterbird training.  It was discontinued some years before the retirement as it ate a lot of hours.

Spencer100 said:
Question.  From another forum.  The Cyclone can't land on water like the Sea King?  I would say no. But just checking.
Click to expand...

Baz said:
No, the Cyclone can't.
Click to expand...

Is an emergency landing considered a type of crash?  The Cyclone does have three airbags that inflate (can be inflated?) upon an emergency water landing.  One on each side of the cockpit and another under the rear fuselage.  They only designed to keep the helo floating upright long enough for crew egress.
B

Underway said:
Is an emergency landing considered a type of crash?  The Cyclone does have three airbags that inflate (can be inflated?) upon an emergency water landing.  One on each side of the cockpit and another under the rear fuselage.  They only designed to keep the helo floating upright long enough for crew egress.
Click to expand...

Most if not all overwater helicopters have emergency flotation systems, including the Sea King which had one in each sponsor.

The Sea King had a "boat shaped" hull and could attempt to take off after a water landing, if the crew was trained (hence waterboard training).  For the Cyclone a subsequent take-off or long term towing should not be attempted.

Normally emergency landings and crashes are different.  An emergency landing is under control and a crash isn't.  In the case of a crash it is unlikely the aircraft remains upright and the bags can be deployed... you just try to get out.

The Cyclone bags can be deployed by the pilots or will automatically deploy upon water entry if armed, which is not normally armed.  It's armed as part of the pre-ditching procedures and for over water take-offs and landings.

Also significantly the Cyclone life raft is mounted externally which can be deployed from the cockpit, again like most if not all modern overwater helicopters.  The Sea King raft wasn't... it was next to the troop seat and had to be dragged to the cargo door and manually deployed.

CH-148 Cyclone tour video, Ex BREEZE 2019 from the SHAPE FB page.
You must log in or register to reply here.