Kirkhill said:
Seems like the Army already has the Navy's solution.. kind of. And only needs a crew of 31 soldiers instead of 59 sailors.

From an overview of the "Army solution" https://armypubs.army.mil/epubs/DR_pubs/DR_a/pdf/web/fm4_01.pdf 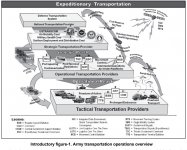 To a focus on Army watercraft operations. https://armypubs.army.mil/epubs/DR_pubs/DR_a/pdf/web/atp4_15.pdf

There's more to the solution than what the boat looks like.

I'm going to assume that the USN/USMC/USNS generally has most of the moving parts necessary other than the boats. The boats seem to be their missing links.

On the other hand, if you are talking about Canada....... 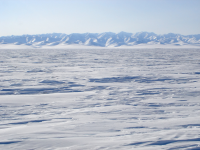 Our canvas appears to be rather blank.

Kirkhill said:
I'm going to assume that the USN/USMC/USNS generally has most of the moving parts necessary other than the boats. The boats seem to be their missing links.

On the other hand, if you are talking about Canada.......

Our canvas appears to be rather blank.
Click to expand...

Where did you get that pic of WInnipeg??????

We could probably use a 'Lyme Bay' equivalent, to enable amphibious ingress/egress along our own gigantic coastlines if nothing else, which looks alot like some of our Coast Guard ships:

RFA 'Lyme Bay' with a Merlin on her flight deck and Wildcats overhead.

The world’s coasts are getting a lot more dangerous as powers such as Russia and China deploy more and more small, quiet submarines and long-range anti-ship missiles.

In response, rival powers are reorganizing their fleets. In general, naval leaders aim to spread out their ships across a wider area in order to complicate enemy targeting. They’re also pulling away from hostile shores.

The latter has obvious implications for a traditional naval concept—the amphibious assault.

Where before, a fleet might safely congregate big, slow amphibious ships just a few miles from an enemy’s beaches, today that kind of operation is probably naval suicide. Subs and missiles could make quick work of amphibs—dooming not only their crews, but the hundreds of troops riding inside.

It’s not that amphibious operations are any less important. Navies, however, recognize they need to conduct sea-to-shore assaults from farther away. That can mean relying less on slow-moving, short-range landing craft and more on fast, far-flying rotorcraft.

To that end, the Royal Navy is breaking up its normal amphibious organization. The British fleet for decades has organized its assault ships—today including two Albion-class landing platforms and three Bay-class amphibious docks—into an amphibious task group.

Now there’s a new plan—and it could result in an amphibious force with more helicopter capacity. Instead of organizing one big amphibious task group, the Royal Navy by 2023 wants to divide its five amphibs into two so-called “littoral response groups.” One for the Atlantic Ocean and another for the Indian and Pacific Oceans.

“The LRG is part of a broader initiative to adapt the U.K.’s amphibious forces to operate in a more dispersed and agile way in response to the increasingly challenging environments that they are now facing,” the International Institute for Strategic Studies in London explained.

According to the news website Navy Lookout, the Pacific LRG—slated for deployment in 2023—could include an Albion, a Bay and a frigate. But there’s a problem. None of these ships has a fixed hangar for a large helicopter type such as the fleet’s Merlin.

The 580-foot-long Bays always were prime candidates for an aviation upgrade. The Dutch-designed landing docks, as built in the early 2000s, lack fixed hangars for helicopters.

They instead have flimsy fabric shelters that temporarily can accommodate a pair of small helicopters in the class of the navy’s Wildcat. The Bays also lack the command facilities they might need for long-range amphibious operations.

It’s not yet clear what changes the Royal Navy will order for Lyme Bay when the vessel enters the yard for rework, likely sometime next year. But all the likely plans involve adding a fixed hangar for up to three Merlins.

In addition, Lyme Bay could get additional workstations for command and control plus recreational facilities so the ship better can accommodate up to 350 soldiers, marines and special operations troops for months at a time.

The end result should be an amphibious ship with significantly more aerial capability. That’s good news for British troops hoping to survive their next amphibious assault.

The Royal Navy is breaking up its normal amphibious organization.

All vessels are Merlin Capable (possibly with the exception of the Batch 1 Rivers?) and everything from the Type 31 and larger is capable of landing a Chinook or an Osprey.

32 Lily Pads.
You must log in or register to reply here.

US Department of Maritime Affairs?