This is pretty cool.... the 'USMC Tactical Technicals'

Marines scored a direct hit in a first-ever live-fire test in which they launched a Navy missile from the back of an unmanned tactical vehicle to strike a surface target at sea.

The Marine Corps has combined two existing technologies to produce a deadly new way to hit targets offshore. Coined NMESIS, the Navy Marine Expeditionary Ship Interdiction System can launch Naval Strike Missiles from the back of a modified Joint Light Tactical Vehicle, or JLTV, to destroy targets on land or at sea.

Raytheon Missiles and Defense, which makes the Naval Strike Missile, announced Wednesday that the Marine Corps used NMESIS to hit a target in the water from Point Mugu Sea Range in California. The missile can take out targets from more than 100 nautical miles away.

Commandant Gen. David Berger showed a photo of the test launch to lawmakers Thursday when discussing the need for funding for ground-based anti-ship missiles. He called the test the result of the "brilliance of a couple of young officers" and Oshkosh Defense, a Wisconsin-based company that makes the JLTV.

I have read that one of the arguments against the USMCs Light Amphibious Ships is that they will be under-armed. How would the defend themselves. I think this is one of the USMCs answers. The missile can be launched from the vehicle while it is onboard the ship in transit.

Edit - they played around with HIMARS from a ship at sea. 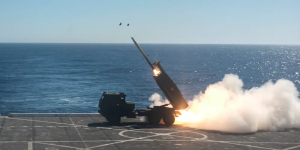 At least then the Marines on ship would have something to do other than PT.

reveng said:
At least then the Marines on ship would have something to do other than PT.
Click to expand...

It will probably take a week of work to scrape clean and repaint that deck.

FJAG said:
It will probably take a week of work to scrape clean and repaint that deck.

I thought their job was to stomp on the bare feet of the matelots with their leather boots if they weren't holystoning fast enough?
You must log in or register to reply here.