PuckChaser said:
Eurfoghter will never get the cost down enough to win a competition. Kuwait deal was $140M USD per aircraft, and they were likely blocked from some technology and weapons only available to FVEY/NATO countries.
Click to expand...

I suspect cost is no longer the prime driver.

Not buying an American plane, especially the F-35 and probably any Boeing made product, have probably brought us to the point where whomever bribes provides the best industrial offset package will win, regardless of military utility... In sadness (and Conservatives hardly much better),

I'm not an expert on aircraft but on Crackbook it seems anyone whoever held the rank of Pte (T) is an SME on a/c, procurement and why we need to reinvest in an a/c from the 50s.

I can only shake my head.
K

kev994 said:
Think of the votes that could be bought if we could just get Viking to build some Sabres
Click to expand...

Entirely wrong two provinces to try and buy votes....
A

SupersonicMax said:
HMD is a lot more than a cueing systems in A/A. What is displayed in it helps maintain SA on the fight.  You can see your wingman (with distance and altitude delta), see there the targets are (no need to guess from the radar display as to where to look), launch acceptable regions and get aircraft state information.  I use it more in that context than for cueing.
Click to expand...

Aside from the fact that the HMD can be added it has also recently come to my attention that the Rafale has it's own kind of stealth technology called "Active Cancellation" something of which I'd never heard of before. It is the reason the aircraft can go into hazardous environments in which the F-35 was meant to go. For instance, here is a source.

Here is the quote:

The French (and Swedes) have long excelled in electronic warfare and jamming and the Typhoon has a way to go yet if it is to catch up with the other two Eurocanards in this area. It is also worth remembering, however, that part of the Rafale’s appearance of being able to go places Typhoon cannot due to SPECTRA is explained by the higher (and admirable) tolerance for risk in the Armee de l’Air compared to the RAF or any other European air forces. Even if Typhoon had SPECTRA, the RAF would not have sent it into Libya before the US air defence suppression had been carried out.
_____________________________________

Except I think he's missing the fact that Rafale can get in and get out because the Active Cancellation makes it very difficult to lock up the aircraft. For instance.

Here is a source.

And here is the quote:

Rafale is officially said to have a frontal RCS of about 0.1m2 and comes under the category of Low observable (LO) aircraft. But with the aid of SPECTRA which can perform “active cancellation”—receiving a radar signal and mimicking the aircraft’s echo exactly one-half wavelength out of phase so the radar sees almost nothing, the RCS is reduced to about 0.06m2.

But it doesn’t stop there. Dassault has admitted that a new upgrade package is almost ready for operations which would further decrease the RCS of Rafale to that of a Sparrow! Called DEDIRA (Demonstrateur de Discrétion Rafale / Descreet Rafale Demonstrator) it aims to improve the SPECTRA suite on the F3R version of Rafale. This program is linked with another one called INCAS (Intégration de Nouvelles Capacités à Spectra) which deals with the integration of GaN modules in RBE2 and SPECTRA suite along with GaN modules incorporated ‘smart-skins’ for all-passive day/night and all weather long-range detection and targeting capability involving all passive sensors available to sensor fusion.
​
The DEDIRA program will further improve the active stealth aspect of SPECTRA to bring down the frontal RCS of Rafale close to 0.0006m2. For reference, the unofficial frontal RCS of Raptor is 0.0001m2 without active cancellation, which is a Very Low observable (VLO) aircraft. DEDIRA is already integrated on a test Rafale numbered B301.

The above article has disappeared, here is another source, look under active cancellation.

I'm not sure if this capability has entered the conversation before now.
A

Lots of information here on Rafale, see active cancellation under the SPECTRA section.

I found a reference to a Snecma M90 engine that would produce 65 kN to 104 kN, which is more powerful than the Typhoon. I have also seen a reference to the fact that the French could have done a 2 way data link for the Meteor missile, but chose not to, which means we could. Then if we could add the HMD and give the aircraft the ability to use additional missiles, it would be a lights out fighter.

The engine upgrade has been in the works for a while, as it was initially a requirement for the sale to India, they then dropped the requirement, but it has been there in the background for sometime now, as in years. The upgrade to SPECTRA, including a big upgrade for the active cancellation technology, as detailed above, is already happening in the F3R upgrade which is pretty much ready to go now. Then drop a couple of billion on the table to get the remaining upgrades done and there's our fighter, if we see a quote for the F-35 that resembles the Super Hornat quote in which the price is way out of line, or even do a mix. The ability of the aircraft (SPECTRA) to fire on targets anywhere in the bubble, including directly behind the aircraft without breaking stride, along with the active cancellation technology is a game changer, at least this is what I'm thinking, this active cancellation technology came out of nowhere.
A

Just wanted to point out how the Rafale upgrades are pretty much all ready to go. I'm not certain what currency these estimates are in but it may be Indian currency, with the reference to $80B being spent on engine technology, which would not make sense with $US or Euros. In the first source we see a reference to the Snecma M90 engine, which comes with a link to the second source, and also there is a reference to REB3 radar, as I believe that increasing the range of the new AESA radar is already in the works and it's something our people should inquire about, as I have a hunch that an increased range could be available in an initial order.

Then the link to the M90 engine leads here. Notice that the engine is ready to be tested in an airframe, so it's built. Also, the power to weight ratio given in the first source has to be with the 2 conformal tanks and the 3 drop tanks, as the Rafale with the new engine, in a typical configuration would have a power to weight ratio above 1:1, so it has to be the configuration they are mentioning in the article.

So the F3R upgrade and the M90 Engine would both likely be available for a Canadian order, then neither the two way data link for the Meteor missile nor the HMD would be a problem, so the last issue would be giving the Rafale the capability to use the US missiles, so long as that could be done in a timely manner we'd be good, just in case we need a plan B. This would be a highly advanced fighter with an entirely different type of stealth capability.

If Bombardier got production rights to build the Textron Scorpion, we'd probably end up stuck with a couple hundred of them whether we needed them or not.

How embarassing - In Belfast of all places. 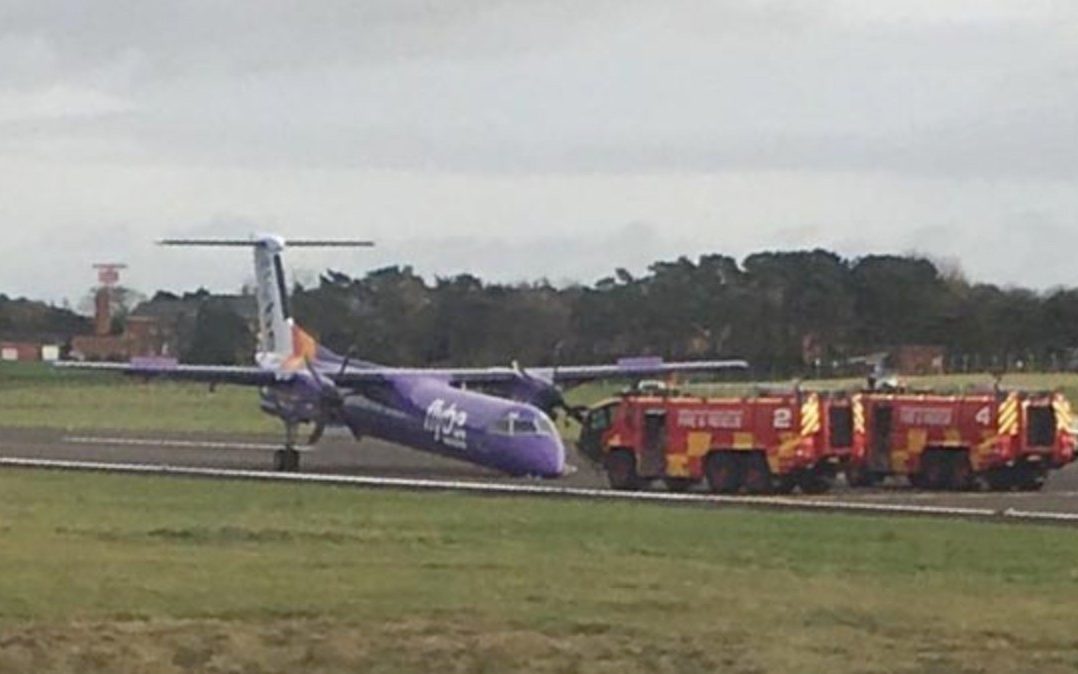 Flybe airliner crash lands in Belfast with no nose gear
Click to expand...

By the way.  That is Flybe, not Flowbee

NAFTA news. The article points out that it may not be that easy for Trump to tear up the agreement, but it also means the uncertainty drags on and on, making it difficult to do business with the US.

SupersonicMax said:
HMD is a lot more than a cueing systems in A/A. What is displayed in it helps maintain SA on the fight.  You can see your wingman (with distance and altitude delta), see there the targets are (no need to guess from the radar display as to where to look), launch acceptable regions and get aircraft state information.  I use it more in that context than for cueing.
Click to expand...

Certainly you probably know more than anyone else here. If I gave you $150 million to buy your own, which would you have (and no the Raptor is not an option )?

F-15 2040C?  Assuming the Libs want to focus on the NORAD role vs. overseas deployments.

The Strike Eagle can carry as many missiles, can stay on station for longer and has as good a radar as the F-15C.  It only has a seat extra but that could either be made into a single seat or train WSOs.
R

SupersonicMax said:
The Strike Eagle can carry as many missiles, can stay on station for longer and has as good a radar as the F-15C.  It only has a seat extra but that could either be made into a single seat or train WSOs.
Click to expand...

You mean to give free rides to visiting Col and Generals?

Pre-flight said:
You mean to give free rides to visiting Col and Generals?

So if you make a politician barf in the back, do you get free drinks in the Mess afterwards?

Colin P said:
So if you make a politician barf in the back, do you get free drinks in the Mess afterwards?
Click to expand...

Not really. I can assure you, it won't be the politician doing "clean up on aisle four"...

Colin P said:
So if you make a politician barf in the back, do you get free drinks in the Mess afterwards?
Click to expand...

My experience was that the person doing the barfing was the one who bought the drinks!!
You must log in or register to reply here.

J.L. Granatstein: Canada has pressing national interests. We should spend to defend them

Ricin Intercepted On The Way To The White House
2 3